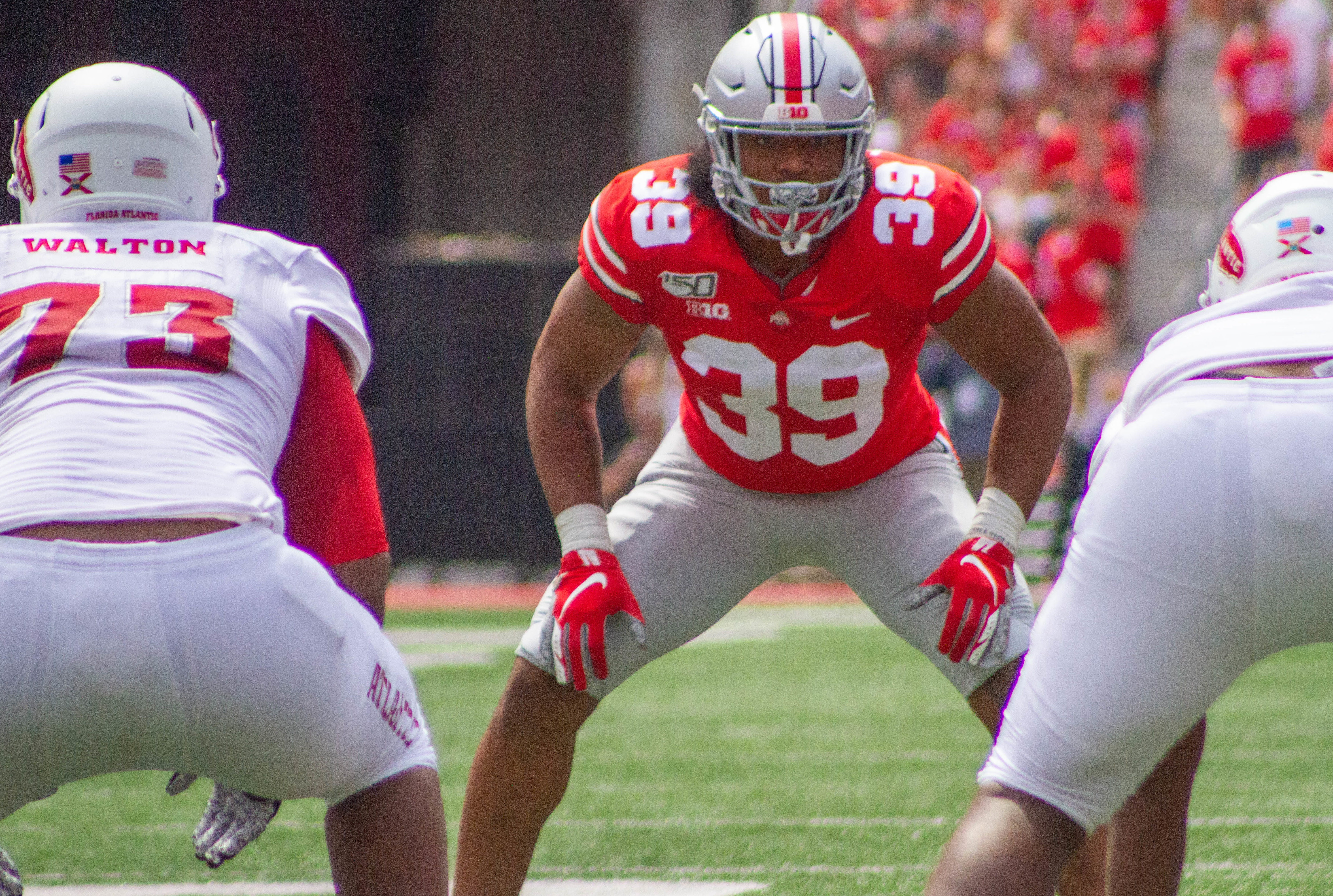 Ohio State’s defensive staff spent the offseason preaching simplicity. After a 2018 season that saw the defense stuck in the mud thanks in large part to overly complex schemes, a new, simple system was both a balm for a defense that obviously needed it and an easy marketing point for a fanbase fed up with the struggles of last season.

After several months of quotes about reading and reacting, playing fast, and simple schemes, Ohio State seemed to change its tone a bit as the anticipation for the season hit a fever pitch. Just days before Ohio State’s season opening win against Florida Atlantic on Saturday, co-defensive coordinator Jeff Hafley seemed to push back against the idea that the Buckeyes were running a simple defense.

“I hope when we say simple, it’s not like we line up and you guys are like ‘Wow, these guys are really simple.’ Simple for the players,” he explained. “It’s our job to make sure what we teach them is simple. But hopefully, we’re still pretty complex.”

This change in pace may have caused a bit of concern in the minds of Buckeye fans, but with game one officially behind Ohio State, that anxiety can be couched, for at least a little while. Actions speak louder than words, and the schemes Ohio State put out on the field against FAU say exactly what they were expected to all offseason, prior to Hafley’s slight heel-turn. The Buckeyes played primarily cover three and showed almost nothing that could be considered complex.

Against better offenses that won’t be the case, but for week one? Simple, fast, and aggressive helped Ohio State put up its best defensive performance (with the starters) in more than a year.

Ohio State’s defensive performance against FAU is defined by their use of cover three, as mentioned. After playing almost exclusively press man coverage in 2018, Ohio State used zone extensively against FAU, to great success. It showed up on the first possession of the game, when Ohio State snuffed out a halfback screen on third and long to force a quick three and out.

Because the Buckeyes are in cover three here, with Okudah, Fuller and Arnette covering the deep thirds, they feel comfortable enough to leave four players (Brendon White, Tuf Borland, Malik Harrison and Pete Werner) underneath to handle anything behind the first down line. With those guys there, FAU’s screen, and essentially any screen Ohio State sees this year would have no chance to succeed. Brendon White is able to identify it quickly and with his speed, and help from the defensive line and three other players in intermediate coverage, this becomes an easy TFL.

This look helps Ohio State again on the next drive. On another third and long, Ohio State drops four into intermediate coverage, three deep, and leaves the pass rushing to their line. Chase Young is able to win his battle easily, gets into the backfield and picks up a sack to force another punt.

Obviously, this is an excellent individual play, but last season, you probably would have seen the ball get dumped off underneath for a first down, because the linebackers would have been blitzing. A great pass rush is negated when no one is in the middle. Ohio State doesn’t make that mistake again, and leaves enough help in the middle to make those dump-off routes impossible. Robison is never able to throw out of the sack, because he would be throwing into an interception.

It worked without heavy pressure too, like on this pass across the middle to tight end Harrison Bryant.

Robison has the time to find a receiver and a clean enough pocket to get the ball to his choice, but he has very little in the way of window, and he has two or three seconds to throw, even without heavy pressure right away. Without an obvious window, he has to make a tough throw to Bryant’s feet just to avoid the zone, and Bryant isn’t able to make the catch. This isn’t going to work every time, and it could honestly have been played better by the Buckeyes, but this exact play with this kind of pressure against man coverage would have been a first down.

While I’ve said plenty about the impact this has on the passing game, and for good reason, because it makes Ohio State much less susceptible to underneath passes, the switch to cover three is even more important with regards to the ground game. This showed up essentially all game, especially when the starters were on the field, as FAU was held to negative rushing yards through three quarters, but a few plays really stand out as caused directly by the new scheme.

Firstly, this play happens entirely because Tuf Borland is allowed to read the play from his zone across the middle, and react to the run cues FAU shows him.

He can attack the ball with room to adjust instead of from right against the line like last season, and that allows him to get downhill, take on a block, and showcase his strength and intelligence. He’s never going to be able to chase players down or make plays on the perimeter, but as a thumper on plays like this, he has legitimate value for the Buckeye defense.

Speaking of thumpers, Malik Harrison is going to be a first-round pick after a year in this system. The ability to sit back and read is so obviously beneficial for him, and that showed up in his statline, with five tackles, including two for a loss, and a sack. It showed up even more on the tape.

Harrison, like Borland, is freed up to read and react here because of the zone, and makes a play with that freedom.

Harrison found similar success in the passing game later in the game, when that freedom allowed him to roam and blow up a pass across the middle to Harrison Bryant before it could turn into a completion. That can’t happen if he isn’t in a zone across the middle, and that change is going to radically impact the way that Ohio State plays defense.

After being nickel and dimed underneath by essentially every team last season, the cover three can slow down if not eliminate the underneath passes, and force teams to beat Ohio State deep.

How many teams on the schedule can do that? Three? Four? That number being low is a risk that Ohio State is willing to take, and even if they come up against a team like Penn State, Michigan, or eventually a Clemson or Alabama that can spread them out deep, they showed off the occasional man/zone mix, and a few pure press looks that indicate they have the counters in the playbook for more talented teams.

As of right now, with Cincinnati, Indiana, and Miami (OH) on the schedule, expect more of this cover three from the Buckeyes, and expect it to continue working wonders with this group. The talent, the intelligence, and the athletic ability is there for Hafley’s cover three to unlock an elite defense from this group.