Film Study: How Ohio State Locked Down Wisconsin To Win The Big Ten 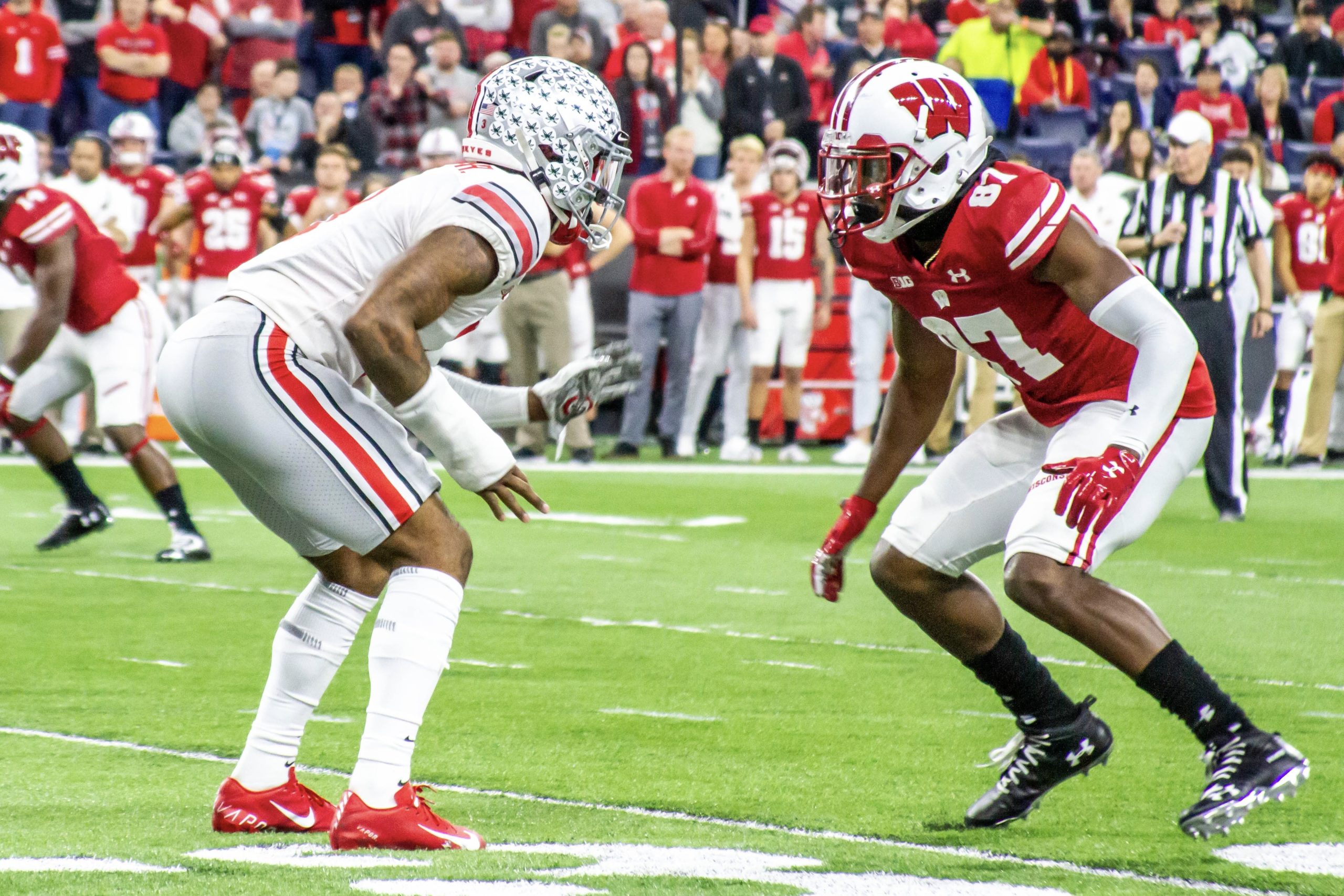 There had yet to be a moment this season where Ohio State looked overpowered, or even equally matched with any team it was playing. The Buckeyes had started slow in the past and struggled at times with mistakes, as it did against Wisconsin on Oct. 26 and then again in the final two games of the season against Penn State and Michigan. However, at no point during those games did the Buckeyes appear to be in serious trouble, largely due to dominance in the trenches and a talent gap so glaringly obvious that it can be seen on every play.

Against Wisconsin in the Big Ten championship game, there was a brief period where the Buckeyes didn’t just look mortal, they looked beatable. When Wisconsin took a 21-7 lead going into the half, it looked like the stronger team, the team more prepared to play than the Buckeyes, an uncommon phenomenon this season.

That score came at the tail end of a first half that saw the Buckeyes truly punched in the mouth, decimated by play in the trenches on both sides of the ball and unable to find answers for Wisconsin’s two primary playmakers: running back Jonathan Taylor and wideout Quintez Cephus. Ohio State looked a step late for much of the half, which can usually be attributed to a loss in the game planning category.

Indeed, Wisconsin entered the game with a strong game plan, designed to take advantage of Ohio State’s few defensive weaknesses quickly, in hopes that it can create a lead large enough to withstand the halftime changes that have guided the Buckeyes in every challenging game this season. Obviously, given the final score, 21 points wasn’t enough.

However, Wisconsin’s first half game plan, and Ohio State’s adjustments in the second half can still tell quite a bit about what can beat this Ohio State team in the playoff, and how the Buckeyes may need to switch things up to avoid being gashed by quarterbacks much better than Jack Coan.

To start the game, Wisconsin came out firing with two plays that were essentially perfectly designed to beat Ohio State’s defense.

The first, this corner route to Cephus, has been open for essentially every team Ohio State has played this season, because it is a natural weak spot in Ohio State’s cover 3 zone. The cover 3 is designed to help protect against underneath passes, with a four man shell within seven yards, while two cornerbacks and a safety cover the deep thirds to prevent huge gains downfield. However, with no zone on the boundaries 10-15 yards out, corner routes like this one can be dangerous if the cornerback in his deep third isn’t ready for it.
Here, Arnette was not. Cephus finds room in the soft spot and is able to break a tackle from Jordan Fuller to grab some extra yards. Wisconsin used a basic flood concept here, with a deep route on the outside, the tight end in the flats and Cephus on this corner, all to beat this zone. The deep route pulls Arnette away, while the route to the flat sucks Pete Werner in, leaving Cephus wide open.

The best way to stop this, essentially, is to either load up the trips side and run cover 6, which would add a fourth zone on the intermediate boundary, though this would require a second high safety, which Ohio State has rarely shown interest in. The other option, if Ohio State wants to stay in zone, would be bringing an extra rusher and getting to Coan before he can throw. This worked for much of the season, but the Badgers were able to stifle Ohio State’s pass rush in the first half on Saturday.

Speaking of elite line play, Wisconsin blew Ohio State off the ball shortly after on a 41-yard touchdown run.

Ohio State’s two primary mistakes in the first half were weaknesses in the zone, as shown on the first play, and over pursuit in the rushing attack, shown here. Wisconsin uses motion to pull a defensive back away from the play side, allowing its two pulling linemen to focus on linebackers instead of looking to kick outside. Tuf Borland and Malik Harrison read those pulling linemen and make a snap decision that because the wide receiver was sent in motion, creating that gap on the playside, Taylor is looking to get outside of his line and run to that gap area.

He isn’t. The plan here was always to force over pursuit with linebacker assumption. Borland and Harrison are both manhandled by the pulling blockers, and Jonathan Taylor is able to hit a gap that was opened by equal numbers in the box, with Pete Werner ignored on the outside, meaning both teams had six box players.

Unlike with the passing troubles, this doesn’t have a ton of schematic fixes. Ohio State could’ve looked to load the box with a fourth linebacker responsible for setting the edge, allowing Borland and Harrison to stay inside, but that didn’t work when the Buckeyes tried it because of Wisconsin’s quick passing attack.

Instead, the fix is, simple as it sounds, for the defense to follow its rules closer. Werner has to get inside quicker, Borland and Harrison have to understand the possibility that Wisconsin could use their assumptions against them, and Jeff Okudah has to make the tackle when this play gets to the last level of the defense.

So, how did Ohio State account for these troubles in the second half? At the risk of painting Ohio State as a team that won with talent as opposed to game planning, which really wasn’t the case, the Buckeyes made primarily personnel changes to alter things slightly, and more importantly, they wore down the Badgers.

The return of Jeff Okudah into the lineup in the second half game Ohio State a coverage option on Cephus and essentially shut him down, which in turn gave the defensive line more time to create pressure, while allowing linebackers to focus more on stuffing the run. Brilliant game planning and coaching is great, but sometimes the best way to win a football game is by having better players. Okudah is that kind of guy.

Secondly, and more to the credit of the coaching staff than the return of an injured player was the switch to Baron Browning at linebacker. Borland struggled even more than usual on Saturday, flashing the kind of pursuit angles that had fans calling for his starting job to go to someone else for much of the last two seasons. His speed is still his greatest weakness, and Wisconsin exploited that, forcing him to make quick decisions and isolating him as an edge player far more frequently than Ohio State is comfortable with.

With Browning in the game, Wisconsin both lost that advantage on a slower player in the run game, as Browning has elite speed out of the middle linebacker spot, but also suffered in the passing attack. Browning is better in zone coverage than any linebacker on the team not named Malik Harrison, and Ohio State was able to use him to slow down Wisconsin’s attack across the middle , like on plays like this.

Ohio State actually comes out with two high safeties here, a pretty new look for the defense, though it is still running a cover 3, just with Josh Proctor in the game instead of Shaun Wade. This is designed to help against passes across the middle, with the theory being that an offense may read cover 4 or cover 2 and look to throw across the middle or deep to the outside, depending on where the corners line up (cover 4 if they’re sagging of, cover 2 if not).

When one of the safeties can show cover 4 and then drop into an underneath zone, the theory is that it’s easier to see and make plays on passes across the middle, with a chance at intercepting a quarterback that isn’t making reads during the play. That doesn’t happen here, but the two safeties still throws Coan off, and he throws into a covered space that likely would not have been covered with a different linebacker on the field.

Now, Ohio State didn’t do exactly the same thing schematically in the second half. Along with a but more Proctor and two-high safety looks, the Buckeyes fired off some interesting zone blitzes to counter Wisconsin’s running attack, to great success.

The Buckeyes are blitzing Wade here out of the nickel spot, with Werner dropping into a deep third and Fuller filling in for Wade. The rest of the defense is in its usual cover 3, though Browning is anticipating run heavily, meaning that there’s more of a three-man deep shell and a two-man underneath shell as Ohio State is essentially blitzing two to combat Wisconsin’s 21 personnel.

The Buckeyes bet right based on the personnel, and Wade is able to blast into the offense undetected to stop the rush before it ever really gets going.

Ohio State was able to ride these slight modifications and its personnel changes to the win, and to a shutout second half. That’s good news for the Buckeyes, obviously, and it serves as a testament to the depth and talent of the roster. However, it does beg the question: what exactly is Ohio State going to do against an offense much better than Wisconsin’s in the form of Clemson on Dec. 28, led by a better quarterback, with better receivers, behind a better offensive line?

For the answer, be sure to keep an eye on BuckeyeSports.com for a full-length film analysis of the Tigers, featuring key Clemson schemes and the counters Ohio State will need to advance to the CFP National Championship.