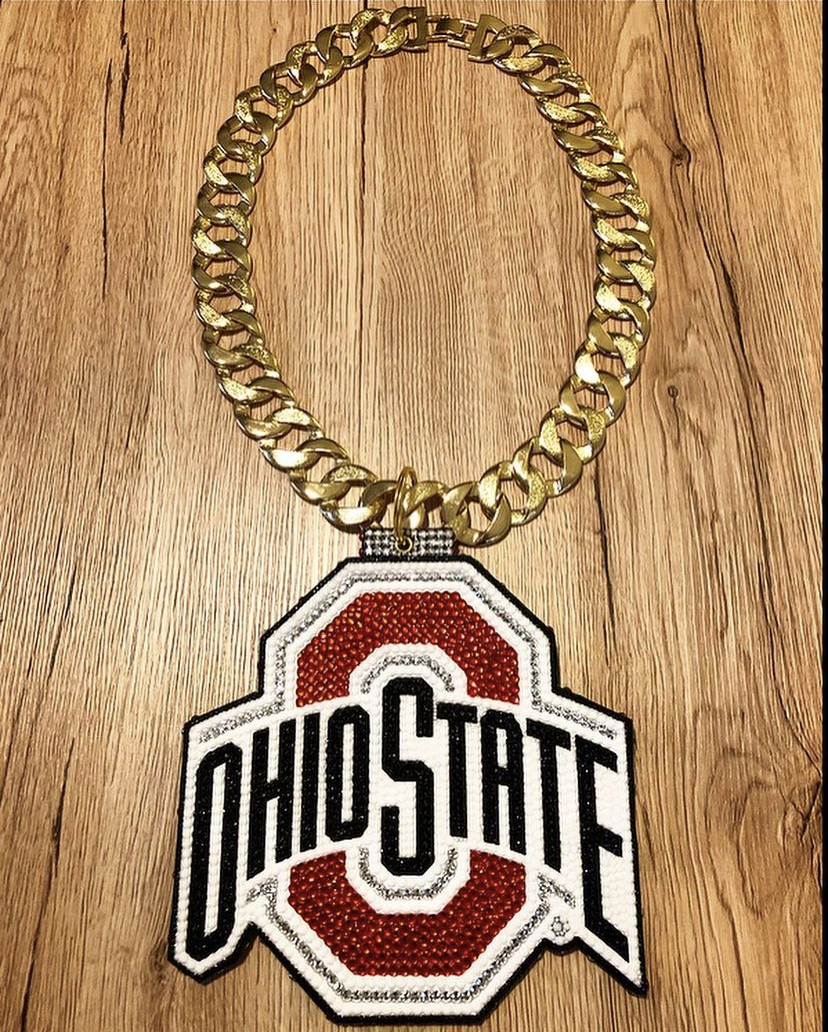 This story will run in the Feb. 12 issue of Buckeye Sports Bulletin. To subscribe to the newspaper, call 614-486-2202, ask about the four free issues promo and say that this story sent you.

The Hurricanes were the first to debut the celebratory item in the 2017 college football season, meant to single out an individual for an impressive performance – be it on a single play or throughout the whole game. Teams and fans took to it immediately, and it spread throughout the sport to where the majority of teams had one creative gimmick or another.

And now, that same congratulatory bling has been brought to women’s college basketball, courtesy of Ohio State and the “dub chain.”

Believed to be one of the first of its kind in women’s college basketball, the dub chain was introduced following Ohio State’s 89-83 win over Michigan State on Jan. 12.

“We’ve got a new thing we’re going to do,” head coach Kevin McGuff said postgame in a video shared on Twitter.

He singled out redshirt sophomore guard Rikki Harris to join him in front of the team, and she hesitantly walked up to stand near him, unaware of why – in fact, nobody other than the coaching staff had been made aware it was happening.

“We’re going to have, basically, a player of the game when we win,” McGuff said. “If we lose we aren’t going to do this.”

He then asked Ohio State video coordinator Ryan Murray to bring in “the football.” In other contexts, “the football” likely references a briefcase that operates as a mobile command center in case the President of the United States needs to authorize a nuclear attack, but here, McGuff was talking about a burdensome briefcase carried into the room by Murray.

The briefcase was then opened up to unveil not launch codes, but a large gold chain with an Ohio State logo made out of foam board and Czech glass rhinestones hanging from it. McGuff placed the chain on Harris, and she was then mobbed by her teammates as they embraced the new tradition.

“It’s been amazing,” Harris said. “When he first did it was kind of nerve-wracking because we didn’t know what was happening. He called me up, I’m like, ‘Uhh…’ But after that it was nice. After every game we’re excited for whoever wins it. It’s a great feeling.”

The process has since been repeated five times, with graduate forward Tanaya Beacham, Harris, senior guard Taylor Mikesell, Sheldon and freshman forward/guard Thierry each receiving the chain, only to then be surrounded by their teammates (as well as a jovial McGuff) to celebrate the win.

The idea came from assistant coach Jalen Powell, who is in her first season with Ohio State.

“With football, they have turnover chains and it gets everyone hyped, gets everyone riled up and brings a sense of togetherness,” she told BSB. “Everyone gets happy for each other when someone makes a big play. I just like the togetherness of it and how it lifts everybody up. It brings energy. It brings hype.”

The chain helped provide a boost for a team that, despite a successful season thus far, has recently had some challenging seasons due to missing out on the NCAA women’s tournament and numerous games being canceled due to the pandemic.

That boost has been provided, as Ohio State is 5-1 since the chain was introduced after the win against the Spartans.

“I had been thinking about some type of an award that will keep the girls motivated throughout the season,” Powell said. “Finally, I was just like, ‘Well, you know what, maybe we could bring what football does and make it our own.’ So then, I ordered this chain, I got it in 48 hours, right in time for Michigan State, and we ended up winning and it was great. Rikki was the first person to receive it. I just liked it because it was such a sweet moment to see everyone get excited for Rikki to have it. I just wanted something for the girls to have to make their own and something that they could look forward to after a win.”

McGuff was the first to admit that the idea came from the younger members of the coaching staff, but he let them run with it.

And since it was introduced, the positive response has been overwhelming from players, coaches and social media alike.

“It’s just super exciting,” sophomore forward Gabby Hutcherson said. “It’s fun. It’s new. No women’s basketball team has ever done this before. It’s not what we were expecting at all. When he whipped that out, we were all like, ‘Oh, well, okay, all right.’

“But it was exciting,” she continued. “It’s fun. I love this team and we’re all super fun. The coaches started to join in on the jokes and antics as well, so it’s been a really fun year.”

The chain itself was made by Alyssa Lot Poe, who’s been making team-branded chains for over three years and selling them on Etsy.

“The logos themselves are made out of foam board and Czech glass rhinestones,” she told BSB. “The chains are metal gold or silver plate. When someone wants to order a custom chain they’ll either send me a picture of the logo they’d like made or I make them a custom logo from the details they provide me for one. I place each stone by hand one by one to make each chain a blinged-out piece of art fans and teams can rep with pride.”

Of the triple-digit number of chains made by Poe, ranging from NFL-branded pieces to custom logos that customers can request, this is the first she’s made for a women’s college basketball team, and the opportunity to do so and become part of Ohio State’s new tradition was exciting.

“It’s incredibly exciting to see my creations on the big stage of women’s Division 1 NCAA basketball,” she said. “I grew up playing ball and would always tell people that I’d be playing in the WNBA one day. I have a deep love and respect for these talented women athletes.”

If Ohio State’s dub chain does start a trend after applying its own spin to the concept, Powell is excited to see where other teams go with the idea. In the meantime, the Buckeyes will keep on celebrating as the gold is placed around someone’s neck following each win.