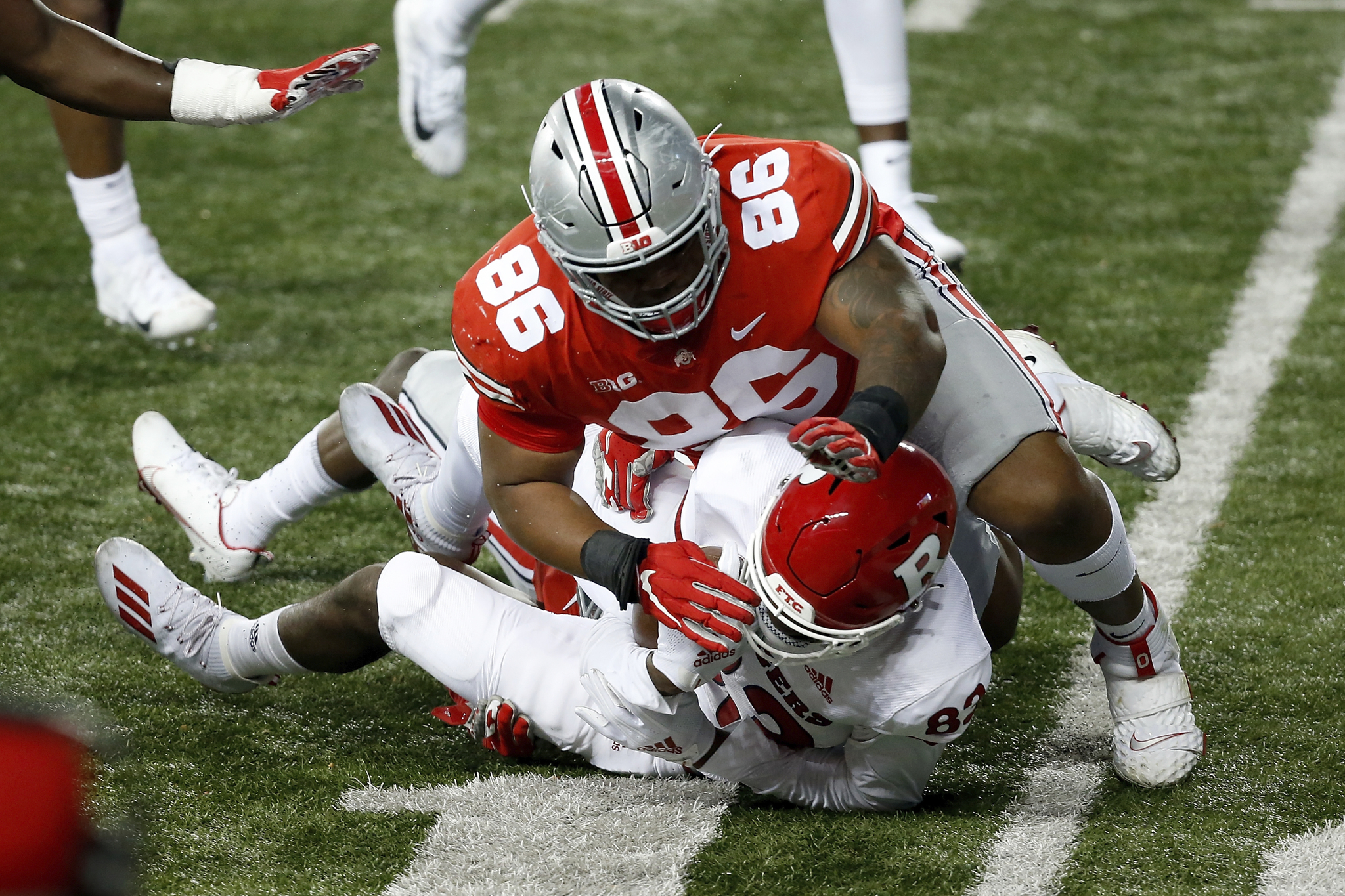 This story was printed originally in the June issue of Buckeye Sports Bulletin. For four free issues of the print edition, no card required, sign up at the link here: http://www.buckeyesports.com/subscribe-4issue-trial/

There are plenty of things about the national championship game against Alabama that Ohio State fans, coaches and players would like to forget. But for Jerron Cage, it is a game that will always represent the first major opportunity he received to contribute for the Buckeyes.

The then-fourth-year junior defensive tackle has waited in the depths of the roster for much of his time with the Buckeyes ever since coming in as a four-star prospect out of Cincinnati Winton Woods. After a redshirt year in 2017, Cage saw action in three games as a freshman and nine as a sophomore, totaling five tackles heading into the 2020 season.

Coming into 2020, there was reason for Cage to expect to become a primary contributor. Ohio State was losing plenty of talent on the interior of the defensive line in the departures of veterans Jashon Cornell, DaVon Hamilton and Robert Landers. And indeed, Cage saw an uptick in snaps and production, playing in all eight games of the year and more than doubling his career tackle total with six, including half a sack.

But it was in the game on the biggest stage that Cage was given his largest chance to shine. Against the Crimson Tide, starting nose tackle Tommy Togiai was unavailable, likely due to COVID-19 protocols. Cage was given the start, and though he did not record a tackle, he told the media over Zoom on April 9 that it was a big moment for him regardless.

“I just remember the excitement of just being able to show what I have,” Cage said. “The whole situation was emotional for me, just going through everything I’ve been through. I had to sacrifice so much during that time frame of this pandemic.”

That sacrifice came through the birth of his son, Jerron Jr., who was born on June 22, 2020. It was in the thick of the pandemic, and after just a month with him, Jerron Sr. left Cincinnati to head back to Columbus and prepare for what was at the time a season that was far from certain.

Talking with Bill Rabinowitz of The Columbus Dispatch, Cage said that he was able to see his son in person only two or three times throughout the remainder of 2020. The rest of their interactions came over FaceTime, where he saw his son on a near-daily basis. It was a difficult situation, but Cage said he made it work through the help of his teammates and by having Jerron Jr. as newfound motivation for his play.

“My son was just born, and I couldn’t even see him,” Cage said. “The fact that I had all my brothers around me and I did it for them, and I did it for my son, and they understood that. I felt like that helped me out tremendously.”

Because of the impressive group chemistry, according to Cage, the defensive line was a highlight for a defense that, overall, struggled in many facets. But the line helped lead a rushing defense that ranked sixth in the Football Bowl Subdivision, allowing just 97.6 yards on the ground per game.

“I feel like the biggest thing was the brotherhood of the D-line, just everybody getting so tight,” Cage said. “Especially during this pandemic, those are the only people we are seeing. We’re seeing each other, so I feel like the jell we had with Jonathon Cooper and Haskell and Antwuan and Taron, Tyreke, all the people, we all just jelled together. I feel like once we all jelled together, we just played off each other.”

Most of that group from the season prior will be back in 2021, with Cooper and Togiai being the only losses. Cooper was selected in the seventh round by the Denver Broncos, and Togiai went in the fourth round to the Cleveland Browns.

While those were core members from 2020, one being a captain and both being All-Big Ten honorees, defensive line and associate head coach Larry Johnson said on April 9 that he likes what he has with the group coming into next season.

“I’m really excited about this group, I really am,” Johnson said. “We lost Tommy, it was a big loss, but we had guys waiting in the wings. Taron has stepped up, and then Jerron Cage is having probably the best spring he’s had since he’s been here, and I think that makes a difference. Those guys played a little bit last season. That gives depth on the inside.”

Vincent is a former five-star prospect who has also waited for his opportunity to shine at Ohio State, though his delay has been more due to injury issues than talent development. He could compete with Cage for the vacancy at nose tackle next to Garrett, but Cage and Jackson were the primary nose tackles for the Buckeyes when Togiai was out against Alabama.

Jackson is yet another veteran member of this defensive line room who has been waiting in the wings. A sixth-year collegiate player with time at Auburn and Blinn Junior College, Jackson finished 2020 with just 11 tackles and one sack on the season, but the sack and five of those tackles came against the Crimson Tide.

Though Cage started the national title game, Jackson saw more time, and the two are likely to again be in competition for the starting role this upcoming season. Despite the competition, Jackson said he didn’t feel pressure to be a leader this year because of how unified the room is on the whole.

“We all talk to each other after practice,” Jackson said. “We’re all leaders really. We all love each other. With Tommy being gone, I feel like we’re still going to be the same unit, just keep rising. After somebody leaves, the other person steps up.”

Cage has an opportunity to find an even larger role this next season compared to what he saw in 2020, and he believes that he has made some strong improvements in his game, both last year and this offseason.

“I feel like the biggest push was last year with my growth, just getting stronger,” Cage said. “I feel like I’ve gotten stronger, faster and more explosive.”

In his four seasons with the team, Cage has continued to find himself in a larger and larger role on this defensive line. For the first three years, the spaces in front of him were filled with players such as Cornell, Hamilton and Landers.

In year four, despite COVID not allowing him to see his son, Cage continued to develop, finding more snaps than he has at any point in his career, ultimately starting at nose tackle in a game with the national championship on the line.

After all that time behind a variety of defensive line talent, which Cage said was definitely difficult to deal with, he now has a pathway to legitimate playing time in his fifth-year senior season.

“That’s anybody in my situation,” Cage said. “You figure you see all these guys leaving and you’re like ‘OK, it’s time, it’s time, it’s time.’ And then you just don’t see it yet. But if you just wait, God always has a plan for you, so I just stuck in there and stayed strong, and now I’m reaping the benefits.”