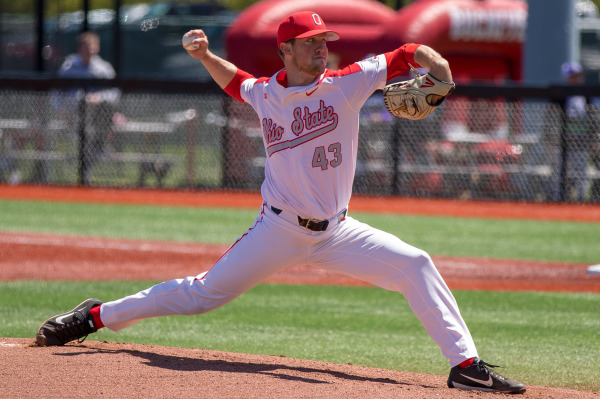 The Ohio State baseball team concluded the 2018 regular season by losing two out of three at Michigan State. The Buckeyes won the opener on Thursday before dropping the next two on Friday and Saturday to finish the regular season 34-20 overall and 14-10 in the Big Ten. Michigan State, meanwhile, improved to 20-30 and 11-12, respectively.

Despite being out-hit 16-10, the Buckeyes battled to victory in a back-and-forth conference matchup with the Spartans. The visitors from Columbus were led by multi-hit games from Bo Coolen and Dominic Canzone and multi-RBI games by Coolen, Dillon Dingler and Tyler Cowles.

Ohio State took a 1-0 lead on a Conner Pohl two-out RBI single in the first inning, scoring Kobie Foppe. Foppe had reached on a walk, stole second and reached third on an error by Michigan State catcher Adam Proctor.

With runners on first and third and two outs in the bottom of the first, Ohio State starter Connor Curlis attempted to pick off Brice Kelley at first, but Kelley reached second on a Noah West error, allowing Proctor to score from third, tying the game at 1-1.

The Scarlet and Gray regained the lead in the fourth on an RBI double by Coolen, plating Jacob Barnwell. The visitors extended their lead to 3-1 when West singled to second base and Coolen scored on a throwing error.

The Green and White cut the Buckeye lead to 3-2 on a two-out RBI double by Kelley, scoring Danny Gleaves, who singled and stole second.

The home team took the lead in the sixth off Ohio State right hander Kyle Michalik, starting when Zach Iverson reached on a fielder’s choice on a bunt that scored Marty Bechina. Ryan King followed Iverson with an RBI double, scoring Zack McGuire and giving the Spartans a 4-3 lead. Michalik walked Proctor to load the bases and got a force out at home before Austin Woodby relieved him. The right hander from Cincinnati struck out Kelley to escape the inning.

The Buckeyes tied the game at 4-4 on a two-out RBI single by Cowles, scoring Canzone, who had reached on an error.

Proctor regained the lead for Michigan State in the eighth with a two-out RBI double to right center, plating Iverson.

Ohio State entered the ninth inning trailing, 5-4, but scored six runs due to costly Michigan State miscues and timely hitting. Noah McGowan reached on a fielder’s choice and Canzone scored on a throwing error by King to tie the game at 5-5. Cowles hit an RBI groundout, scoring Foppe and taking a 6-5 lead. Dingler laced a single to left, plating McGowan and Pohl for insurance runs that would prove to be critical. Coolen ripped another double to score Dingler, and Canzone brought in Barnwell on an RBI infield single, pushing the lead to 10-5.

Michigan State did not roll over, adding three runs of its own in a comeback effort in the bottom of the ninth. Chad Roskelly doubled to left center, scoring Justin Antoncic, who is a Westerville, Ohio native. Then with two outs, Iverson shot an RBI single up the middle, scoring Roskelly. Bailey Peterson laced a pinch-hit RBI single to right field to bring in Bechina from second, but Ohio State right hander Seth Kinker got Proctor to fly out to hold on and win the game, 10-8.

Woodby earned the win and improved to 5-0 after allowing one run on two hits with one strikeout in 2⅓ innings of relief. Curlis pitched five innings in the start, allowing two runs (one earned) on seven hits and one walk with one strikeout.

The Buckeyes took a 1-0 lead in the top of the first inning on a two-out RBI double by Tyler Cowles to score Kobie Foppe.

The Spartans tied the game in the bottom of the first with a solo shot to left field by Chad Roskelly off Ohio State starter Ryan Feltner.

Adam Proctor gave the Green and White a 3-1 lead with a two-run home run to right in the bottom of the fourth inning.

The Scarlet and Gray threatened in the bottom of the fifth when Noah West drew a leadoff, four-pitch walk and Dominic Canzone followed him with a single up the middle. Foppe failed to lay down a sacrifice bunt, popping up to the catcher, and Noah McGowan popped up as well. Conner Pohl drew a walk to load the bases, but Cowles struck out to end the inning.

The Spartans pulled away in the seventh with speed on the base paths and costly errors by Foppe and Jacob Barnwell. After back-to-back singles, Bryce Kelley and Justin Antonic moved into scoring position on a double steal. Chad Boskelly hit a ground ball to Foppe at second base and he botched it, allowing both runners to score.

Ohio State left hander Griffan Smith relieved Feltner and hit Proctor with a pitch. Buckeye catcher Jacob Barnwell attempted to pick off Proctor at first base and threw the ball into right field, allowing Roskelly to score and extending the home team’s lead to 6-2.

Michigan State left hander Mitchell Tyransky shut down the Buckeyes to close out the game, striking out four and allowing just one unearned run on three hits and one walk in a four-inning save. Spartan starter Mason Erle allowed one run on six hits, three walks and one hit batter with four strikeouts in five innings.

Feltner fell to 4-5 for the Buckeyes but pitched well outside of the long balls. The Hudson, Ohio, native went 6⅔ innings, allowing six runs (three earned) on eight hits, three walks and one hit batter with three strikeouts.

Ohio State struggled to find offensive production and fell 8-3 to Michigan State in the series rubber match on Saturday.

The Spartans totaled 10 hits and drew three walks, while the Buckeyes tallied nine hits and one walk.

The Spartans scored first on an RBI double down the line in left by Antoncic, scoring Gleaves, who led off with a single and stole second base.

The Buckeyes answered in the top of the third with a two-out RBI single to left center by Kobie Foppe, scoring Canzone from second after he had doubled.

McGuire hit a two-run home run to left center in the bottom of the third off Ohio State right hander Austin Woodby, pushing the Spartans’ lead to 6-1.

Michigan State added two more insurance runs in the bottom of the eighth, starting with a two-out RBI triple by Young, scoring Kelley, who had been hit by a pitch. Then Young scored on a wild pitch by Ohio State right hander Curtiss Irving.

The Buckeyes attempted a ninth-inning comeback but fell short after scoring two runs. Cowles scored from first on a throwing error when Iverson attempted to throw Jacob Barnwell out on a ground ball. Barnwell reached third on the error and scored on an RBI single by Bo Coolen. Lowery was able to escape the inning, allowing two unearned runs on three hits with two strikeouts in two innings of relief.

Niemeyer pitched only the first two innings and fell to 3-3, allowing four runs on four hits and three walks. Woodby was solid outside of the home run, finishing with two runs and three hits allowed with two strikeouts in 3⅓ innings.

Ohio State struggled to get anything going offensively Mokma. The 6-7 right hander pitched seven innings and allowed just one run on six hits and one walk, while striking out four.

Ohio State will play next in the Big Ten Tournament in Omaha, Neb., running from May 23-May 27.