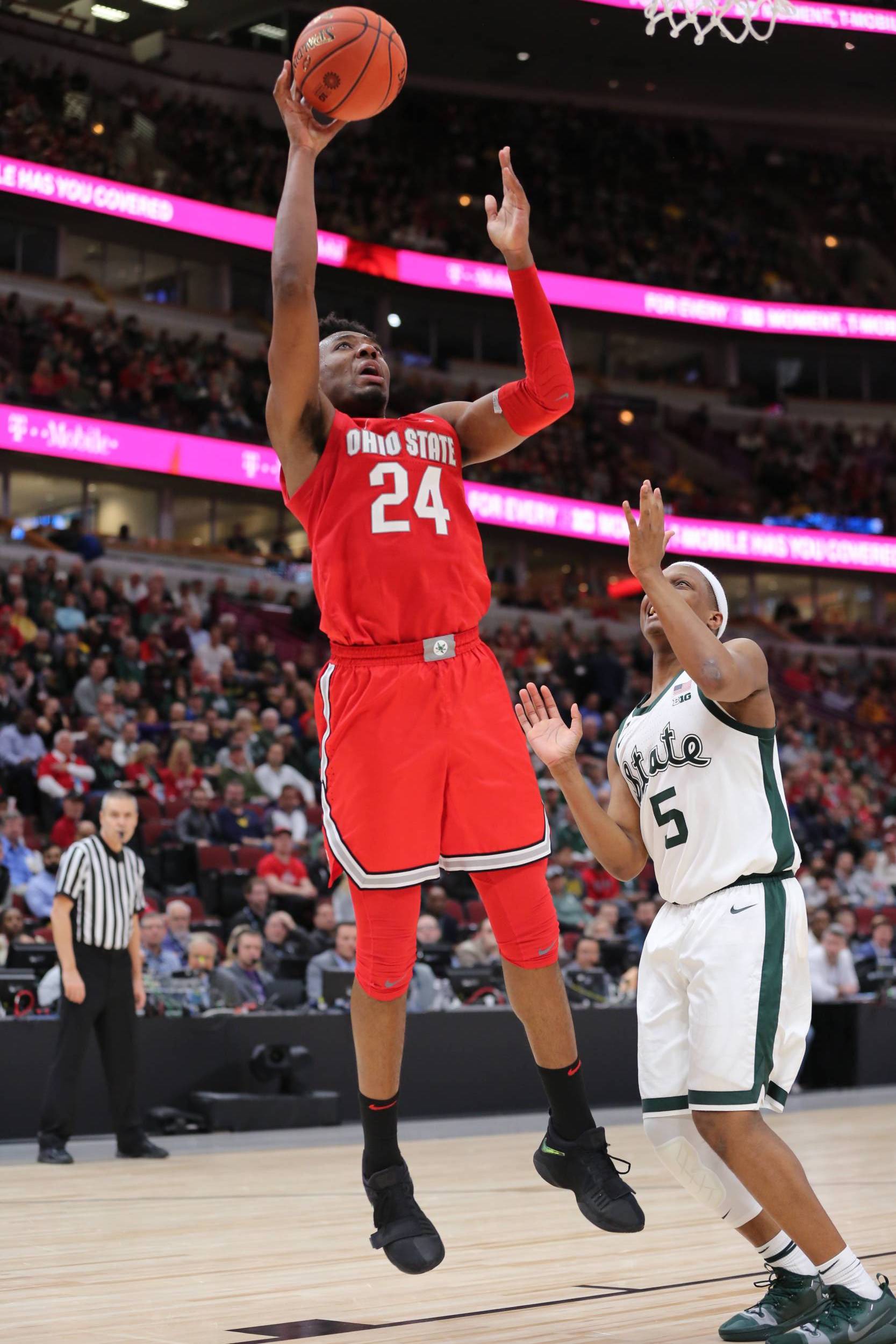 Six minutes into the game the Buckeyes held a 10-6 lead and appeared crisper than their No. 1-seeded opponent, but had difficulty sustaining their high-level intensity.

“It’s hard because, again, our lack of depth in some areas,” Ohio State head coach Chris Holtmann said. “But I thought we were playing really hard. We came out with the right mind-set. I thought we were competing offensively and defensively. Our turnovers were too much offensively, but they made shots against us that were fairly challenged. And as a coach, you hope that water will find its level at some point.”

The Scarlet and Gray did not go out without a fight, battling through a back-and-forth first half and trailing by just six points at the intermission.

Fifth-year senior guard Keyshawn Woods picked up where he left off against Indiana, scoring 16 points on 5-of-8 shooting for Ohio State.

However, the Buckeyes’ leading scorer and rebounder, sophomore center Kaleb Wesson, struggled to find his rhythm and fouled out with just seven points on 3-of-7 shooting and 9:42 still left in the game.

Junior forward Andre Wesson played one of his best games as a Buckeye, scoring 14 points on 5-of-8 shooting, including a tremendous 4-of-5 clip from distance.

Offensively, Ohio State was not great, but it lost the game on the defensive end.

Freshman guard Luther Muhammad, who recorded two of the Buckeyes’ six steals in 18 minutes of action, said the team had to take responsibility for its defensive miscues.

Although Ohio State quelled the scoring of a likely offensive source in Ward, an unlikely hero arose for the Spartans. Freshman guard Foster Loyer entered the game averaging just 1.4 points per game and shooting 20 percent (4 of 20) from three-point range.

Loyer exploded for 14 points on 5-of-7 shooting, including a marksmen-like 4-of-5 performance from beyond the arc. Many of Loyer’s baskets came on uncontested looks due to breakdowns in Ohio State’s defense.

Holtmann was asked if Loyer was even on the Buckeyes’ scouting report, given his the fact that he entered the matchup averaging only 1.4 points.

“Obviously, he’s not done that a whole lot, but we had him on our scouting report,” Holtmann said. “His 3’s gave them life. His 3’s really gave them life when it was a one-possession game. But that’s kind of what good team’s do.

Ohio State had difficulty keeping up with Michigan State’s ball movement, as well as its dribble penetration. As a result, the Buckeyes committed 21 fouls, leading to a 18-of-21 mark at the free-throw line for the Green and White. Comparatively, Ohio State drew 16 fouls and knocked down 10-of-10 free throws.

Michigan State used a 24-8 second-half run to build a 75-54 lead with just four minutes until the final buzzer. The Scarlet and Gray put together an incredible 16-0 run to cut the differential to just five, but only nine seconds remained and the Buckeyes’ comeback effort came up short.

Despite the disappointing conclusion, Holtmann left the windy city extremely pleased with his team for not backing down, and for never giving up.

“Loved it,” Holtmann said of the Buckeyes’ effort. “I loved our guys, I loved the way we finished the game. We made some mistakes, we turned it over too much, but I just loved how our guys fought and finished out the game.”