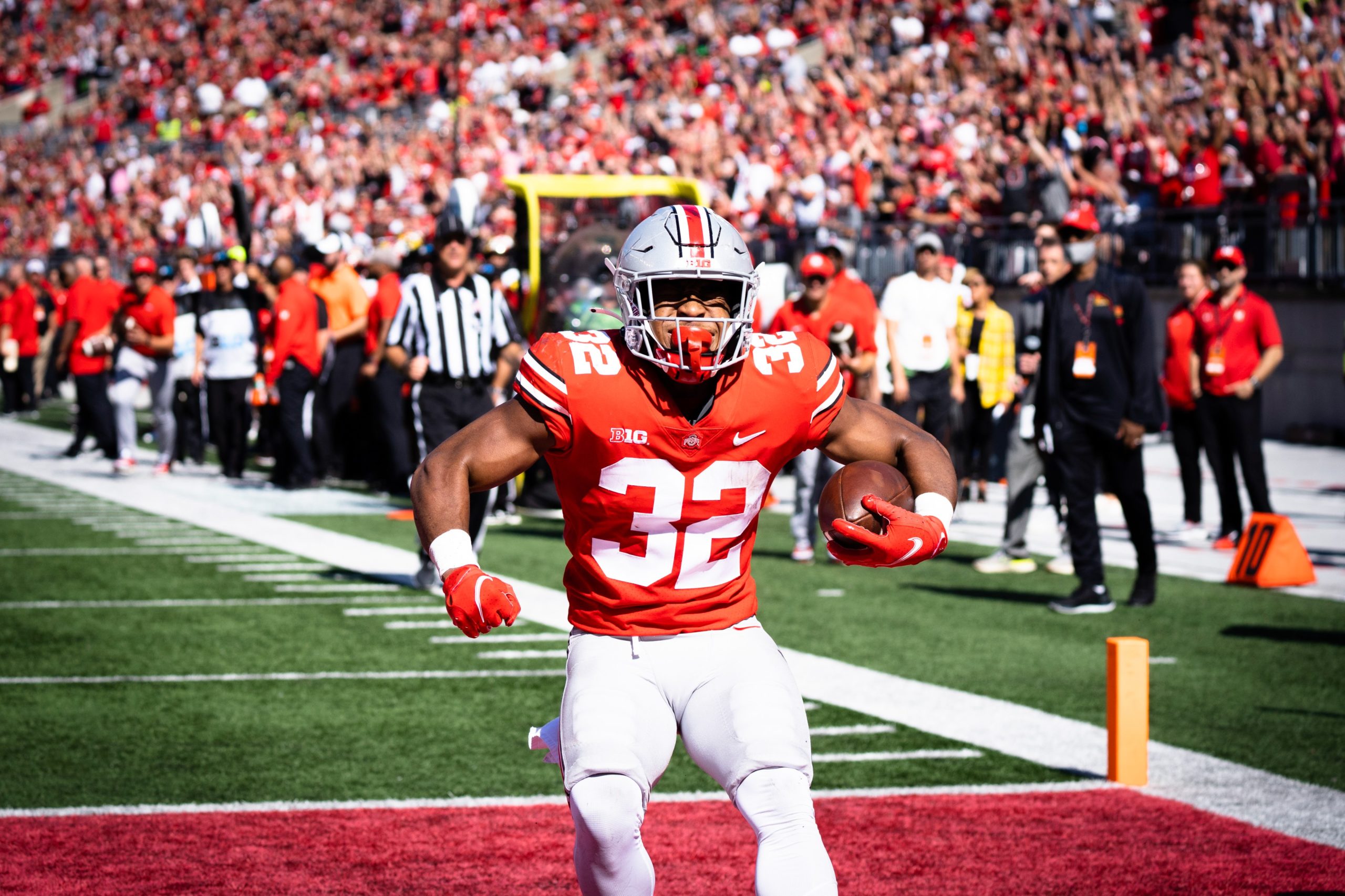 Chase Brown, BSB: Garrett Wilson made his 100th career reception as a Buckeye this afternoon. It’s hard to believe the junior wide receiver didn’t reach the milestone sooner, given how much of a consistent threat he’s been for Ohio State in two seasons and change.

C.J. Stroud targeted Wilson six times against Maryland, with the pair connecting for five receptions, 84 yards and two touchdowns. Their lone mishap came when Stroud placed a ball just outside the reach of Wilson in the back of the end zone at the end of the first quarter.

For most receivers in college football, this is a breakout game, a career game and a standout game, but this is another day at the office for Wilson.

Chris Olave and Jaxon Smith-Njigba gained more yards, and the former tied Wilson for the team lead in touchdowns. Mark has more to say on Olave, so refer to his Buckeye Leaf for more on his performance. All in all, Wilson did what he was supposed to do, and he gets a well-deserved sticker from me.

Wyatt Crosher, BSB: TreVeyon Henderson has been a monster throughout his true freshman season, and against Maryland it was no different.

Henderson scored a touchdown for the sixth straight game – every game of his collegiate career – and finished with three total scores, two the ground and one as a receiver.

That dual-threat ability really shone for Henderson this time around, as he rushed 16 times for 102 yards and caught four passes for 67 yards. The 169 yards from scrimmage was a game-high for either team.

Ohio State’s offense has been firing on all cylinders the past three games, and Henderson has been a lot of the reason why it has worked. Whether it’s as a rusher or as a receiver, the Buckeyes need to keep getting him the ball and let him make plays.

Patrick Mayhorn, BSB: It’s the easiest pick in the house, but I’m not opposed to taking layups when I can. C.J. Stroud is a new man. He was excellent against Rutgers a week ago and he was even better on Saturday against Maryland. His command of Ohio State’s refined offense is improving with each passing week, and now fully healthy – or close to it, his arm talent is really starting to flash on throws further down the field.

The final stats, which are tremendously flattering, don’t even tell the full story. Stroud was 24-of-33 passing for 406 yards and five scores against the Terps, but several of those incompletions were drops, and Stroud only racked up one or two questionable decisions all day.

Outside of those, he went about his reads like a pro, made the throws Ohio State needed him to make, and distributed the ball to his trio of ace receivers – as well as a new contender in the passing game in halfback TreVeyon Henderson.

When Stroud is playing like this, it’s hard to see any defense in the nation challenging Ohio State’s offense. There’s just too much firepower when Stroud is on. And on Saturday, he was as good as he’s been in a Buckeye uniform.

Mark Rea, BSB: With the beating Ohio State administered to Maryland, pretty much anyone on the team deserves a Buckeye leaf including the guys who didn’t get in the game. After all, they wore their uniforms well.

But since I have to decide, I’ll go with Chris Olave, who turned in another 100-yard receiving game (ho hum) as well as two more touchdowns as he continues to track OSU’s all-time record of 34 that has been held by David Boston since 1998. Olave now has 29 career TDs, and you’d be hard-pressed to find a better one than No. 29, a twisting, juggling 30-yarder late in the third quarter after which an exasperated Maryland cornerback Tarheeb Still simply raised his hands and shook his head in frustration.