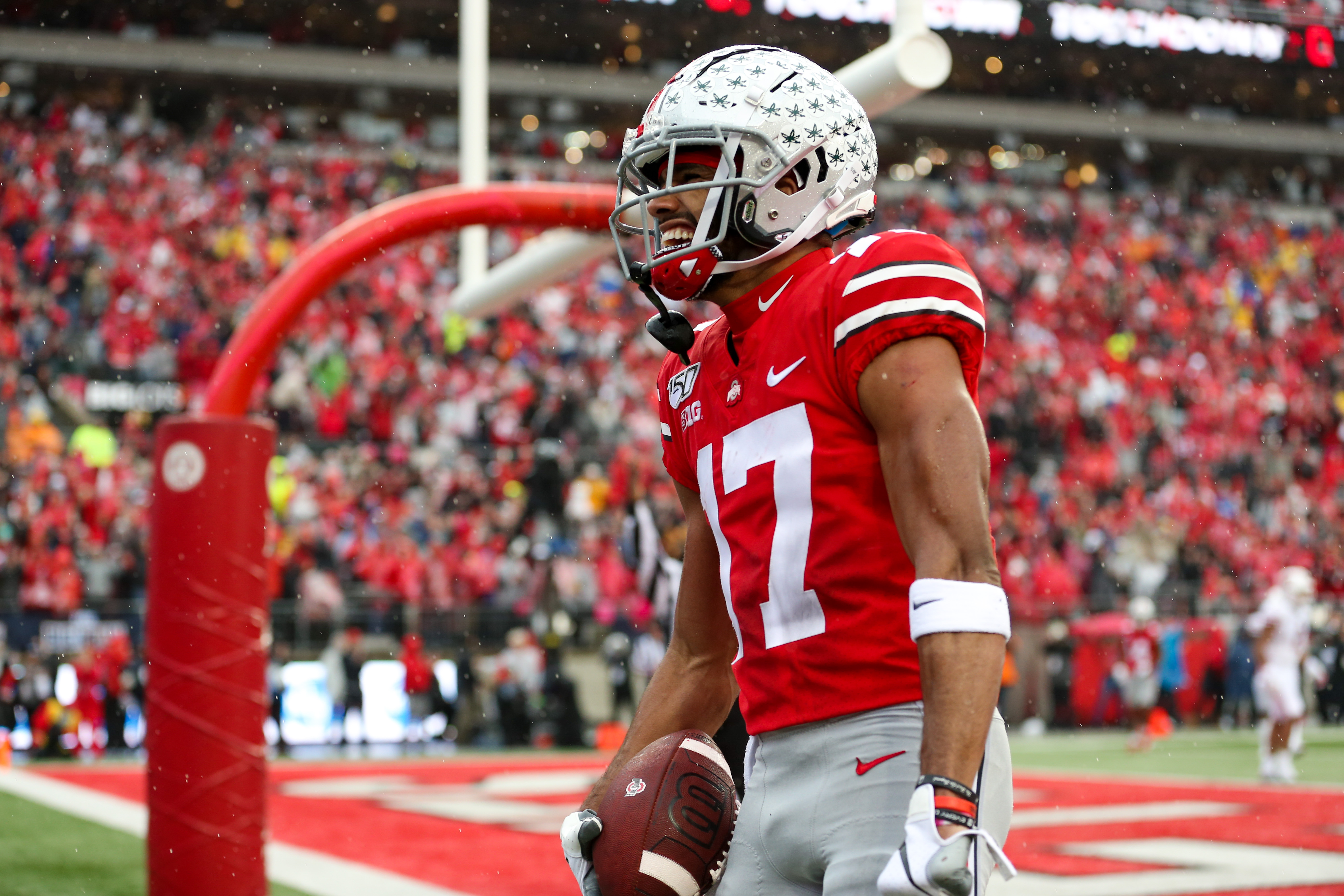 Ohio State started slow, but came out and earned a resounding 31-point win against No. 13 Wisconsin. Here are the four players that stood out to the BSB staff from the impressive performance by the Buckeyes.

There are plenty of great picks to take from this game, but I am going with wide receiver Chris Olave.

Olave finished the game with seven receptions for 97 yards and two touchdowns, catching more passes and earning more receiving yards than every other player on Ohio State combined.

While the Buckeyes relied more on the run than plays through the air, Olave was the safety net for Justin Fields all night, and made some pivotal catches down the stretch to keep important drives going.

J.K. Dobbins deserves a Buckeye Leaf for his dominant performance in Ohio State’s 38-7 thrashing of Wisconsin in a rainy Ohio Stadium.

Despite facing the nation’s No. 1 rush defense, which entered the game allowing just 58.4 yards per game, Dobbins had an incredible game against the stout Badger front.

The junior captain maneuvered his way to 221 yards from scrimmage, with 163 coming on the ground and 58 through the air.

The La Grange, Texas, native averaged 8.2 yards per carry, displaying both elusiveness and power with jukes and broken tackles throughout the rain-filled affair.

Dobbins also scored two touchdowns in a game where he surpassed 1,000 yards rushing for the season, making him the first Buckeye to rush for more than 1,000 yards in his freshman, sophomore and junior seasons. Archie Griffin is the only other Ohio State back with three 1,000 yard seasons, altogether.

Dobbins’ day was one for the books.

Defensive end Chase Young won’t win the Heisman Trophy —  after all, it’s an award typically reserved for an offensive skill player — but he should.

Young continues to be the most dominant player in the country on either side of the ball, and his six tackles, five tackles for loss, four sacks and two forced fumbles against Wisconsin may have been the best single-game performance this season.

That stat line is even more impressive when you consider that Wisconsin’s offense doesn’t give him many opportunities to rush the passer. He also had to face double-teams and multiple tight end formations throughout the course of the game.

Young’s constant presence in the offensive backfield was a key reason why the Buckeyes limited Badgers running back Jonathan Taylor to a season-low 52 yards on 20 carries.

Ohio State’s offensive attack has been predicated on success and domination up front all season long. The Buckeyes are a run first, physical football team that only really struggles when they can’t get halfback J.K. Dobbins going, which doesn’t happen very often.

Early on against Wisconsin, the Buckeyes found themselves in that exact situation. Dobbins wasn’t exactly struggling, but he – and the rest of the offense – wasn’t really able to string together multiple positive plays in the first quarter.

Once the line got going in the second and third quarters however, Ohio State was off to the races. Because of that domination up front of an outstanding Wisconsin front seven, the Buckeye offensive line gets a collective Buckeye leaf this week. The Buckeyes rushed for a combined 264 yards on 50 carries, on a defense that came into the game allowing 58.4 yards on the ground per game. That starts up front and Ohio State would have been nowhere near as dominant if it wasn’t for the big men up front taking control of the game in the second half.