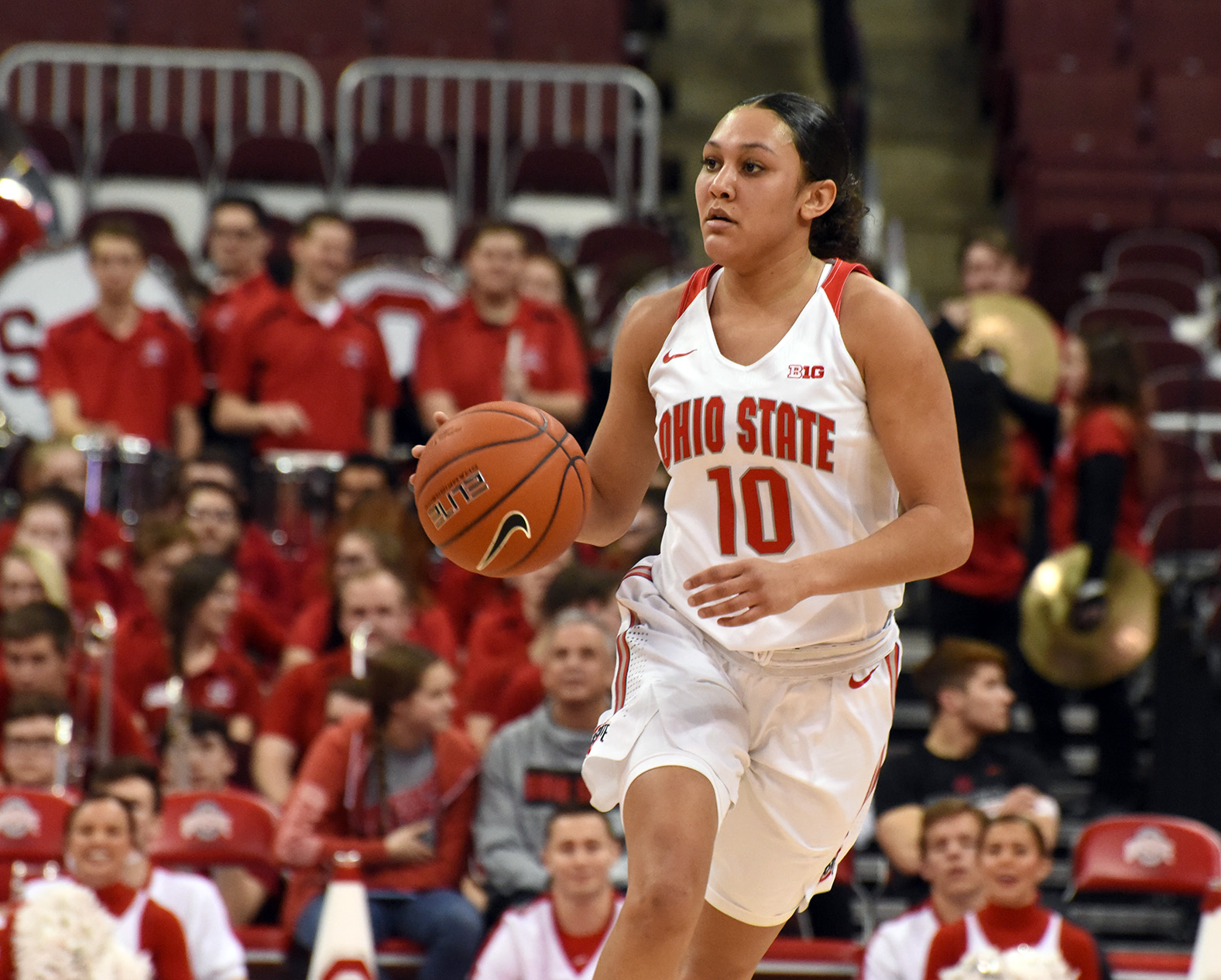 That upperclassman is junior guard Braxtin Miller, who transferred from Oklahoma State ahead of the season. Immediately upon arrival, head coach Kevin McGuff turned to the former Dayton Archbishop Alter standout to help lead his young team.

“Obviously with us being as young as we are, we have no seniors and only one junior, who is Braxtin, who just transferred here this year, I knew that she’d have to provide leadership,” McGuff said. “Even though she hadn’t been here before, she’s been in big games at Oklahoma State in the Big 12.

“And she’s doing that. She’s a tough defender, she provides leadership; we tend to execute a little better on the offensive end when she’s on the floor. She’s doing what I thought she could do for us.”

Miller has embraced her leadership role on the young Buckeye squad, joking that her teammates act like she is very old despite the fact she just turned 22.

“Just trying to give them advice on what to do, better ways to see things in the game, how to react in the game,” Miller said. “All of the freshmen, and even [sophomore guard] Janai [Crooms], everyone is so different, I’ve gotten a good understanding of how to talk to each one and what each one needs. Just trying to give them advice about attitude, effort or the right decisions to make in a game with passing and things like that.”

Decision making is a strong part of Miller’s game, which is supported by her excellent assist-to turnover ratio. She leads Ohio State in assists and boasts an excellent 2.3 assist-to-turnover ratio.

“She can do a little bit of everything,” McGuff said of Miller. “And most importantly, she knows when to do what, which I knew, especially early on, our freshman might not know that. They would have the talent but not the experience to do it. And she brings that level of experience that we really need.”

Beyond her sound decision making, Miller averages 7.8 points and 3.3 rebounds per game to go with her 3.3 assists per contest.

Despite leading the Buckeyes in minutes at 31.5 per game, Miller is averaging the fewest playing time of her collegiate career. She averaged 14.7 points, 3.5 assists and 4.2 rebounds across 35.0 minutes per game last year at Oklahoma State after posting marks of 11.7 points, 3.4 rebounds and 2.2 assists in 33.1 minutes per game as a freshman.

Defensively, Miller prides herself on trying to shut down the opposing team’s best player, and her combination of strength and length at the guard position helps her defend at a high level. She leads Ohio State with 1.5 steals per game, which is an improvement from her marks of 1.1 and 1.4 takeways per contest from her freshman and sophomore season, respectively.

Through four full months of the in-season college basketball grind, Miller has been thrilled with her decision to transfer.

“It was great, I’m really happy,” Miller said. “I’ve had so much fun. I’ve got to be with a really youthful team, so it comes with a lot of experiences, but it’s been good. I’ve been happy.

“When I was at Oklahoma State, my mom maybe saw two of my games a year, maybe three. It never really upset me, but it’s nice now that she gets to — she’s been to almost all of my games at home. And I get to drive home and see my family more often, which I haven’t been able to do for two years. so it was definitely nice.”

Not only can Braxtin’s mom watch her play more now, but she can be there for the highlights like when Miller passed the 1,000-point mark for her career in a 13-point, three-steal performance during a 65-52 win against Nebraska.

“It means a lot,” Miller said. “It’s honestly something that everyone wants to get to in his or her college careers, so it’s super awesome and I was really grateful that I was able to reach it.”

Big shoutout to Braxtin Miller. Career point 1,000 and it comes in a W. Congrats B! #GoBucks pic.twitter.com/b0LDNWsxgf

With the well-rounded Buckeyes (17-11, 10-7) spreading the ball around, there have not been as many shots for Miller in Columbus as in Stillwater. The talented junior has made some clutch ones, though, including Feb. 2 at Nebraska.

With just 34.5 seconds left in the game, Ohio State clinged to a one-point lead after trailing the Huskers by 15 at halftime, and needed a win to avoid a three-game skid.

Miller calmly drained a three-pointer and the Buckeyes held on to win 80-74 behind 17 points and four assists from the 5-foot-11 guard.

A huge three for Braxtin Miller! Buckeyes lead 78-74 with 34.5 to play pic.twitter.com/AzaKTmgdLH

The Scarlet and Gray scorched to a six-game winning streak following the victory, and Miller was asked how it felt to spark the streak.

“Well, I didn’t spark the winning streak with that shot. We did that as a team,” Miller said, deflecting the credit. “It felt really good to hit that down and be there — that was one game I had to pick the team up when they needed me. It can really be anybody any time, so that was one game that they needed me and I felt like I was there. It felt good to be able to be there for the team, just as [freshman guards] Jacy [Sheldon], Madison [Greene], Kierstan [Bell], [sophomore forward] Dorka [Juhász], everyone has been there.”

Although Miller knew she was joining a young, talented team with high hopes for the future, she saw an opportunity to have an impact in Columbus. The decision was about more than being closer to home or a big role on a young roster. Miller wanted to help the Ohio State women’s basketball program.

“I was never really too worried about playing time,” Miller said. “I felt like even when I’ve not scored a bunch at certain times in the season, I’m confident in my abilities to do other things that team’s need at the same time. Which is why I said my role has to change depending on the game.