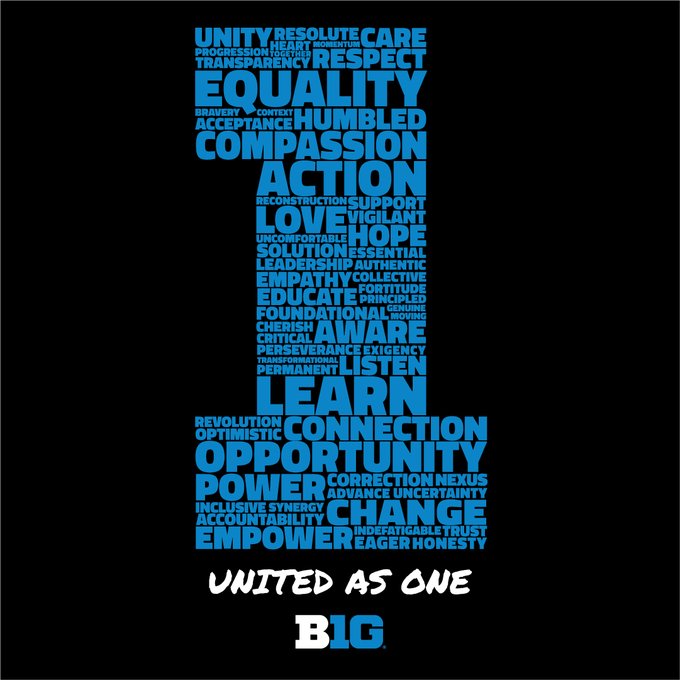 The Big Ten is launching the ‘United As One’ social justice campaign, which is one of the conference’s several Equality Coalition initiatives.

‘United As One’ is dedicated to constructively and collectively recognizing and eliminating racism and hate in our society by creating resources for inclusion, empowerment, and accountability, according to the conference’s release.

“All things are possible in the Big Ten when we unite as one,” Big Ten Commissioner Kevin Warren said in the statement. “I am humbled and deeply appreciative of how our 14 member institutions have communicated, collaborated and committed to develop a conference-wide campaign focused on creating equality and equity in our society.”

The ‘United As One’ icon was created by Chris Althoff, who is the Big Ten’s associate director of branding, and the design is a word cloud arranged in the shape of the [Big Ten] number one.

Courtesy of the Big Ten Conference.

This icon, which represents the purpose and passion of the Equality Coalition, will debut on all 14 Big Ten campuses the weekend of Oct. 24 and feature prominently alongside and in support of each university’s unique social justice awareness campaign.

What follows are the specific special justice awareness campaigns of each Big Ten member school: