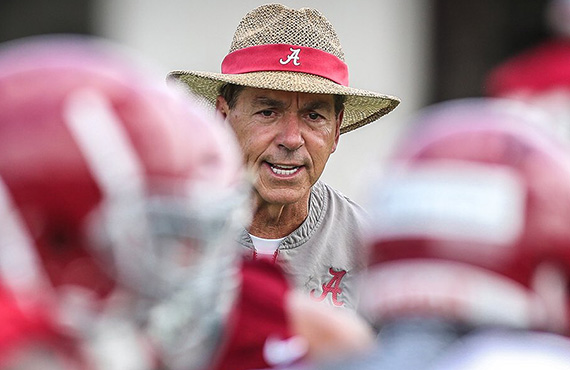 Behind Enemy Lines is Buckeye Sports Bulletin’s newest series on how teams outside of Ohio State — but relevant to the Buckeyes through history or through skill level — are recruiting in the current cycle. Up next is Alabama.

While Ohio State currently sits atop the 247Sports team recruiting rankings, there’s no denying that spot is typically reserved for Alabama.

In fact, the Crimson Tide have finished with the nation’s top-rated recruiting class eight of the last 10 recruiting cycles. The two times they didn’t finish at No. 1, Nick Saban’s squad finished second (2020) and fifth (2018).

That makes year’s slow start on the recruiting trail even more puzzling.

So why have the Crimson Tide gotten off to such a slow start despite being arguably the most successful program in the country on the field and on the recruiting trail over the last decade?

“There are several reasons for it,” Tuscaloosa News beat writer Brett Hudson told Buckeye Sports Bulletin. “They had two decommitments pretty close to one another back in March, four-star quarterback Drake Maye, who followed the family legacy to North Carolina, and cornerback Latrell McCutchin, who hails from Texas. Of course the camps are a big recruiting tool that have been limited during the pandemic, too,  and that has not helped Alabama’s case. It hasn’t stopped schools such as Tennessee and Ohio State, though, so you can’t in good faith use that as an explanation.

“It’s perfectly plausible that Alabama is looking at a small class in 2021, and could be pickier than normal for that reason. I counted just 11 scholarship seniors on the roster, and this does not project to be a group that will produce a ton of NFL Draft juniors — cornerback Patrick Surtain II, wide receiver Jaylen Waddle and linebacker Dylan Moses could be the entire group. Naturally, there will be attrition in manners other than graduation and the NFL Draft, so I’m not saying Alabama’s looking to only sign 14 guys this year. But even if the coaching staff has a number of, say, 20 or lower in mind, this start would make a little more sense.

“It bears noting that, while the recruiting process has happened earlier and earlier in recent years, Alabama has still pulled late additions in recent years. Five-star quarterback Bryce Young was an in-season commit, as were offensive lineman Javion Cohen and junior college corner Ronald Williams Jr. Running back Jase McClellan was pulled away from Oklahoma during the Early Signing Period, too. Alabama is just one of those schools that can add a handful of guys in the final hours and change the numbers game dramatically.”

If Alabama does in fact settle for a smaller class, the Crimson Tide’s streak of top-five finishes that dates back to 2008 will be in jeopardy. But that doesn’t really matter to the coaching staff, which is focused on quality not quantity.

“If you look at the primary positions of need in this class, it’s offensive line, secondary and defensive line,” Hudson said. “On the offensive line, Alabama is in play for the Brockermeyer brothers, James and Tommy, who are the No. 1 players at their position (center and tackle) in the 247Sports composite, plus other prospects in areas that Alabama recruits well, such as four-star guard Jaeden Roberts from Houston. Alabama could also get McCutchin back on board, but if they don’t, they are pursuing in-state five-star cornerback Ga’Quincy McKinstry and Florida four-star safety Terrion Arnold heavily, and there are plenty of defensive linemen there for the taking. Hitting on a combination of those would shoot Alabama up the rankings, closer to the territory they typically occupy.”

Speaking of the trenches, two of Alabama’s top targets along the defensive line are currently committed to Ohio State. The Crimson Tide sent out an offer to Streetsboro, Ohio, four-star defensive tackle Michael Hall in March, one month after he committed to the Buckeyes, while Bradenton (Fla.) IMG Academy four-star defensive end Tunmise Adeleye had Alabama in his top five before he pledged his services to Ohio State in April.

Alabama will surely try to get them both on campus in the fall, but seeing as both are actively recruiting on behalf of the Buckeyes, it’s highly unlikely those visits happen.

Don’t fret for the Crimson Tide, though, as they’ll undoubtedly bounce back with a top-rated class in 2022. After all, Saban hasn’t shown any signs of slowing down despite being the fourth-oldest coach in college football at 68 years old.

“Four years ago, you would see Nick Saban go on a rant every so often about how competitive he is, how good he feels and how committed he is to continue doing this for a long time. You don’t see that much anymore,” Hudson said. “Now it’s far more often talking about how they do in fact play freshmen, fighting some sort of perception that freshmen don’t play at Alabama.

“I just don’t see that narrative going around anymore. He’s still so active with his program, he clearly still has the energy to do this at a high level, those concerns just aren’t there at the moment. If that energy wanes and he starts delegating more things than he is now, those conversations may happen. As of now, I don’t know of such a narrative forming, and if it is, it’s misguided. Check back in three or four years.”