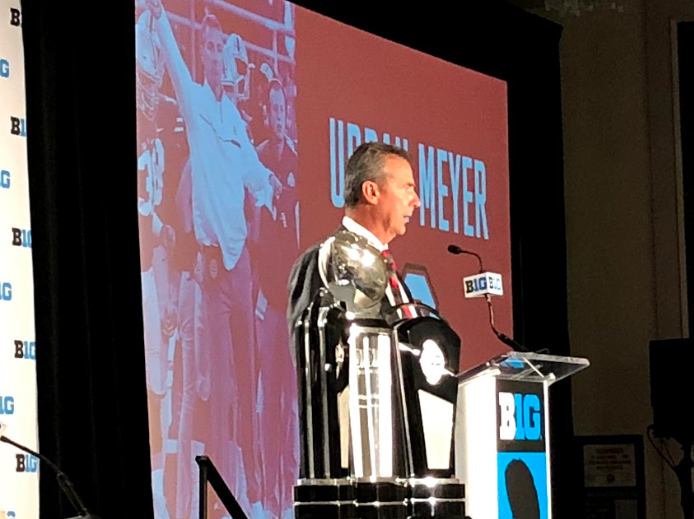 “Obviously had to make a change on our coaching staff (Monday),” Meyer said of Smith, 34, in the opening statement. “It was the best interests of our team.”

After reports on allegations of Smith’s past domestic violence surfaced Monday morning, Meyer said he was aware of the initial incident in 2009 but not the subsequent dispute in 2015, which was reported by Brett McMurphy.

Meyer was the head coach at Florida from 2005-10 while Smith was an assistant on his staff from 2005-o9. Smith started as a quality control coach from 2005-07 and then became a graduate assistant for 2008-09 after he graduated from the university in 2007.

“In 2009, Zach was an intern, (he and his then-wife Courtney were) a very young couple,” Meyer said. “As I do many times, most coaches and people in leadership positions, you receive a phone call, first thing you do is tell your boss, let the experts do their jobs. We’re certainly not going to investigate.

“It came back to me that what was reported wasn’t actually what happened. And (my wife) Shelley (Meyer) and I actually both got involved because of our relationship with that family and advised for counseling and wanted to help as we moved forward.”

An incident report filed by the Gainesville (Fla.) Police Department detailed a domestic violence dispute in which Smith was arrested on the morning of June 21, 2009, for aggravated battery of a pregnant victim. Courtney was three months pregnant, but she decided not to press charges eight days later.

According to McMurphy, the Powell (Ohio) Police Department arrested Smith after he was involved in another domestic violence dispute Oct. 26, 2015, the same season he held the additional title of OSU recruiting coordinator. The alleged domestic violence dispute, which reportedly occurred before the Smiths divorced Sept. 1, 2016, stated that Courtney was a “victim of sustained physical abuse by the suspect,” according to McMurphy’s report.

A Columbus Dispatch report stated that an official with the Powell Police Department did not know of any charges filed against Smith in 2015.

“I got a text late (Monday) night something happened in 2015 and there was nothing,” said Meyer, who noted that he was perviously unaware of the allegations. “Once again, there’s nothing — once again, I don’t know who creates a story like that.”

The allegations of Smith’s past domestic violence were brought to light last Wednesday when he appeared in Delaware (Ohio) Municipal Court for a misdemeanor charge of criminal trespassing from a May 12 incident with his ex-wife. Two days later, a domestic violence civil protection was filed Friday by Courtney, 33, with the Delaware (Ohio) Police Department. Unless a judge reverses it at an Aug. 3 hearing, the order would be in place for five years and require Smith not to be within 500 feet of his ex-wife.

Asked about whether or not Ohio State terminated Smith because the information became public, Meyer did not comment one way or another.

“It’s a very personal matter,” Meyer said. “The decision was made. I think the details that I’m obligated to give, I gave. You’re talking about people’s lives, et cetera. So the decision was made. It’s time to move forward. And we are in a public world. I try not to operate, especially when you’re talking about personnel and people, making things because it became public.

“But to say that doesn’t have something to do with it, it does a little bit. I’m one of those ones I really don’t care about that. I try to stay focused on what’s the most important thing. That’s our players and our team. But I do understand the value. It’s The Ohio State University is bigger than all of us. So you have to do what’s right by them. And the timing. It wasn’t just my decision. It was a group effort on several people that I rely on.”

Smith is the grandson of former Ohio State assistant coach (1966-71) and head coach (1979-87) Earle Bruce, who first mentored Meyer while he was a graduate assistant with the Buckeyes in 1986-87. Meyer said Smith’s relation to Bruce, however, played no role in Meyer’s decision to hire Smith at UF or OSU.

“Zach was first hired because of his skill set,” Meyer said. “I knew about it because he was with me at Florida. Played for me at actually Bowling Green. But Coach Bruce now is the strongest relationship I’ve ever had other than my father. I’ve made that clear many, many times. So the big picture that was very important in this particular situation, you know, I think that’s one of the hard jobs of a leader; you have to make decisions that are for the best of the program, and I did.”

Due to Smith’s dismissal, Ohio State has a vacancy on Meyer’s 10-member staff of assistants. One candidate to replace Smith in the interim could be quality control coach and former Buckeyes wide receiver Brian Hartline. Meyer had no confirmation on Hartline’s potential promotion, which was reported Monday by Lettermen Row, but the head coach did reveal a timeline for an announcement on OSU’s replacement.

“That decision will be made later in the week,” Meyer said. “Any speculation up to that point is certainly that. I have not even addressed my staff. I addressed several of our staff. It happened rather quickly.

“I get back (Tuesday night). (Wednesday) we’ll have conversation. I’ll probably release something by the end of the week is what our plans are.”