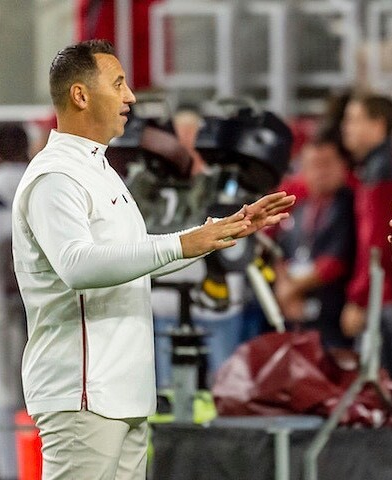 Following their 49-28 victory over Clemson in the College Football Playoff semifinals, the Buckeyes are amid preparation for a national championship showdown with the Crimson Tide, who defeated Notre Dame 31-14 in their semifinal game.

Alabama offensive coordinator/quarterbacks coach Steve Sarkisian spoke to members of the media via Zoom video conference Jan. 6, previewing the highly anticipated title game. What follows is a rundown of what Sarkisian said:

Well, it’s obviously a tremendous opportunity. We’re excited to be playing in the National Championship football game. Proud of our football team and the work we’ve put in.

Clearly super excited for Smitty winning the Heisman last night, and a lot of the awards that have already come out, the offensive line winning the Joe Moore Award. I think all those things are a really cool byproduct of the type of team that we have, and those individual successes and awards come because we’re on a good football team.

Clearly I’m proud of the guys. I’m proud of the work they’ve put in. I would say just I know the questions will come. Clearly I’m excited about the opportunity at Texas. It’s a tremendous one for me. Looking forward to getting started there. But like the commitment I made to Coach Saban two years ago is the same commitment I’ve made to these players, and that’s focusing on this game, giving this game the attention that it deserves so our players have an opportunity to go out and play to the best of their abilities, and that’s what we’ve always preached here is to put our players in the best position to be successful on the field and off the field, and this week has been no different.

But definitely, I want this thing in this conference to go keeping the focus on that game, because I think this game is what this is about, and I’d prefer to keep it that way.

I’m curious when you look at Ohio State’s secondary specifically, they’ve given up some big plays this year, but they’ve also made some plays, Shaun Wade a few interceptions, Sevyn Banks. What stands out to you that they do well and what stands out to you that you can look to exploit if you can go into it a little bit without giving too much away?

Well, clearly they’re all very talented players. I think the two corners have great length. They play the ball extremely well when it’s in the air, thus you see the turnovers. They can play man-to-man, they can play zone coverage.

I think one of the keys to passing the football is doing a great job up front. We’re going to have to protect well when it’s time to throw the football so we can allow Mac (Jones) the time and the receivers time to do their thing down the field.

And then we’re going to have to win one-on-one opportunities when they come. I think when it’s a talented group back there, that’s the challenge, is to win your one-on-one battles, so that’s what the focus will be on.

How exactly are you dividing your time? Are you doing all your game prep, then doing Texas recruiting or whatever? How is that working out?

Quite honestly, my week for me would be a normal game week as if I hadn’t taken the Texas job. My focus is on the game. I’m prepping for the ballgame. Any of the spare time that I do have, that’s getting my attention for the job at Texas, whether that’s staffing or recruiting, things of that nature.

But I would say my week has been as normal as it could be, and has been, of game planning and prepping for the ballgame.

It’s no secret that you guys at Bama and Ohio State have recruited at an elite level. What does it take for a program to recruit at the level you guys have done over the last few years?

And then thirdly, I think one of the misnomers is that Alabama and Ohio State are the only ones that sign four and five-star players. Clearly we do, but I also think there’s a piece of development that sometimes gets lost. Yes, we recruit good players coming out of high school, but then there’s a developmental piece that’s needed to develop that player throughout his time and throughout his career in college.

So I think clearly both programs do that extremely well.

Nick Saban has developed an environment there that’s very favorable for coaches, I guess, who are rebuilding their coaching careers. What makes that work so well?

I mean, I think it’s a two-way street. Clearly Coach Saban offers guys like myself an opportunity to come into his program, learn, develop as coaches, but I think it’s a two-way street in that I think when you come in like a guy like myself, I think you need to come in understanding what your role is. I think you need to come in — I don’t want to call it necessarily humble, but I do think there’s a piece of humility that has to come into this. This is the greatest college football coach of all time, and recognize the space that you’re in, regardless if you’d been a head coach for seven years, and there’s been a variety of us that have come and gone through here.

But he’s a tremendous mentor, and if you allow yourself to be mentored, I think you gain even more out of this experience.

That’s all I tried to do in my time here, whether it was my year here in 2016 as an analyst or the past two seasons as the offensive coordinator, is, one, coach the kids and do the best job I could do coaching the kids, but, two, really try to be a sponge with him and why he goes about what he does, some of the decisions he makes, so that if you ever get the opportunity like I’m getting now that hopefully you can take some of these things with you to be a better coach down the road.

When you’re looking at building an offensive game plan, you’ve got the Heisman Trophy winner out there, you’ve got an incredible running back, you’ve got all these tools. How do you go about determining distribution of the ball and how everybody is going to stay happy when everybody wants it?

Well, I will say this: I think we’ve got a very selfless team on offense. I think our players really understand our scheme and what we try to do. I think they also understand defenses very well.

So they recognize when it’s a good match-up for the offensive line inside.

When those plays come in game, there’s not much — I don’t want to call it complaining, but I know some people deal with that. Our kids really understand why we are doing what we’re doing, and I think that’s a tribute to all the coaches on the offensive staff of really conveying the game plan to our players so that they understand what we’re trying to do, and if the defense does A, we’re going to go do B, and if the defense does B, we’re going to go do C.

I think when you can get a team that is mature like ours on offense right now that can think at that level and understand a game plan at that level, you really don’t deal with you feel like you have to get somebody the ball. It happens organically. It happens naturally in our system.

And then ultimately the results are what they are, and we’ve obviously had a tremendous year offensively. Like I said, I’m very proud of our kids. To have three guys in the finalists of the five at the Heisman with Najee (Harris), Mac (Jones), and Smitty [DeVonta Smith], the offensive line getting recognized, all those types of things I think are a direct result of who they are on a daily basis and the maturity that they have.

I was just wondering, how do you describe the experience of working with an offense like this where if everyone is healthy you could conceivably have four guys who are Heisman quality players? How unique has that experience been for you, and how rare do you think it might be to have that even in the future, that you’ll have that kind of talent?

You know, I don’t know. I’ve been fortunate enough in my career to be around some pretty good players. You can go all the way back to the USC days when we had Reggie Bush, LenDale White, Matt Leinart, a great offensive line, all the way until now.

Even a year ago when we had Tua (Tagovailoa) and (Jerry) Jeudy and (Henry) Ruggs on this offense and Jedrick Wills. I’ve been very fortunate and very blessed throughout my career I’ve been around really good players.

Like I said, I think the one thing that this group is very unique at is I think they play with one another, they play for another one, they celebrate one another with the successes that they have because they recognize that is team success.

And I know Coach Saban has said this time and time again, but the maturity on this team is really high. Through a year when all of us, coaches, players, different teams, professional sports, college sports, have dealt with a lot with the pandemic, our leadership on our team has been tremendous and they’ve remained focused. They remained detailed in their approach.

You mentioned (junior wide receiver Jaylen) Waddle a minute ago. How much has he practiced and how has he looked?

It seems like in the last decade or so, there’s been a bit of a shift away from more localized recruiting concentrated in the southeast, especially for Alabama, to get players from California, the West Coast, even Hawai’i with Tua. Is it possible to build a program that can contend for a title if you’re not recruiting from every state?

Again, these are, I guess, opinion-based answers. A, I think we do a tremendous job here at Alabama of identifying local talent and talent in the southeast. I also think we’ve got a national brand at Alabama that has the outreach to go national and to go to Hawai’i or to go to the northeast and do those things.

I think every school probably takes a little bit of a different approach based on in the surrounding areas, the talent pool that is near you. Again, I think everybody is different, but at the end of the day, when you can recruit good football players, you can recruit good people and then you have the staff that can develop them, you give yourselves a chance to be in the position that we’re in.

Just wondering, when was the first contact with Texas? And also, what did you learn from that experience in 2016-17 in that transition with Lane (Kiffin) and you and the offensive coordinator job, and how did that help you with this experience you’re going to go through?

You know, the guy is really good. We worked well together. I obviously took some things away from that that have, I think, helped my career and will continue to, and at the end of the day I’m excited about the opportunity to go to Texas, but my focus is on this ballgame.