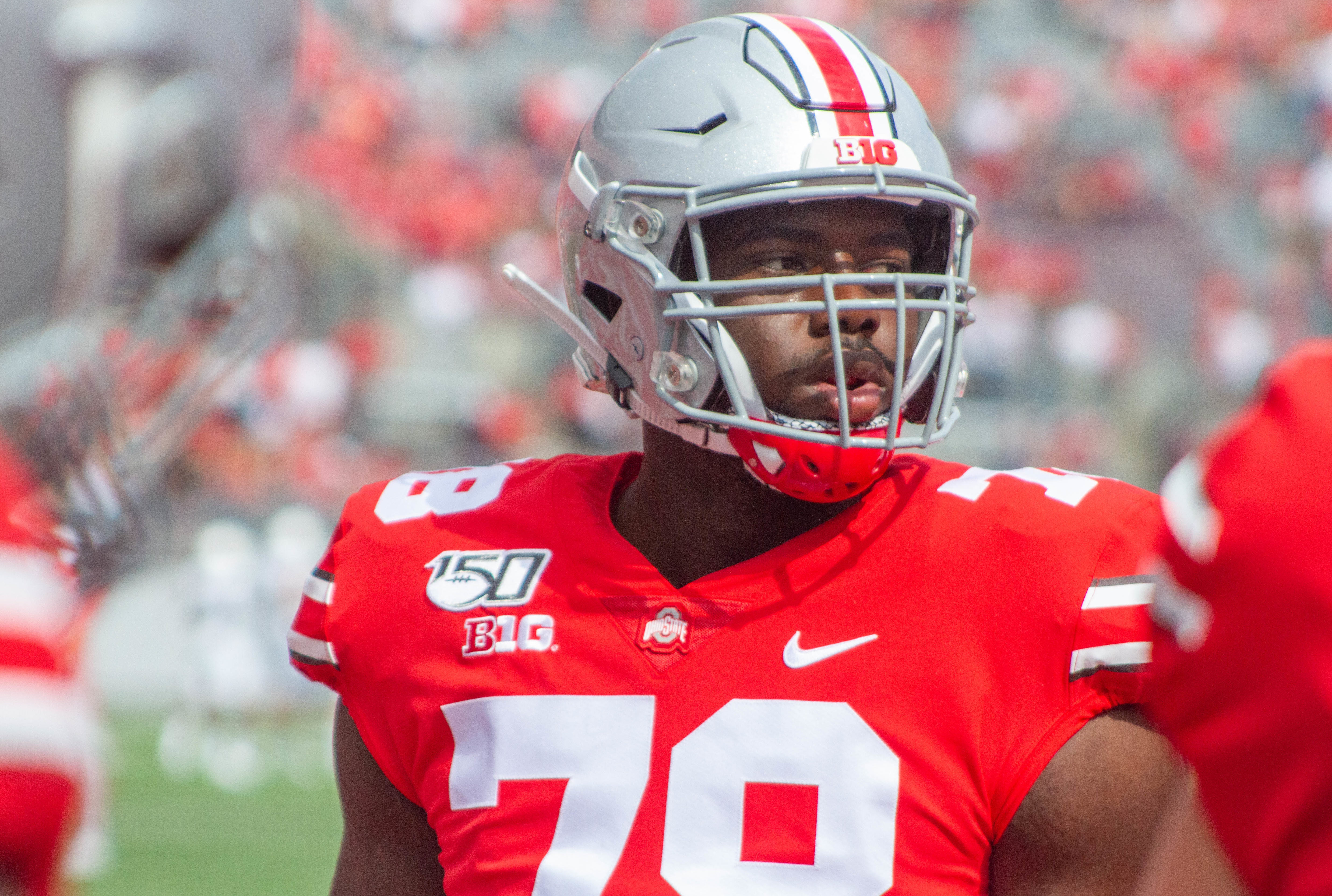 Former Ohio State offensive lineman Nicholas Petit-Frere was selected by the Tennessee Titans with the No. 69 pick in the third round of the 2022 NFL Draft on day two. He was the 69th overall selection.

Petit-Frere was the No. 1 high school tackle according to ESPN, Rivals and 247Sports from Tampa (Fla.) Berkeley Prep. He was ranked the No. 7 overall prospect in the class of 2018 in the 247Sports composite rankings as a consensus five-star recruit.

When Petit-Frere arrived in Columbus, he spent his first year developing in the weight room and gaining healthy weight. After redshirting that season, he broke into the starting lineup and appeared in all 14 games of a Big Ten Championship season for the Buckeyes.

Last season, Petit-Frere continued his dominant stretch on the offensive line, albeit with a change of scenery. After Thayer Munford decided to move inside to left guard, Petit-Frere moved over from right tackle to protect quarterback C.J. Stroud’s blindside. He was named a candidate for the 2021 Outland Trophy in the preseason — an award offered to the nation’s best offensive tackle.

According to Pro Football Focus (PFF), Petit-Frere was one of college football’s best tackles in 2021. He finished the year with an overall grade of 78.5 (out of 100) across 768 snaps at the position and was among the top-five tackles in run blocking efficiency at 84.3.

Petit-Frere’s struggles last season came with pass-blocking consistency — a category that PFF graded at a 60.0.  However, that grade took a significant hit against Penn State and Michigan when he allowed a combined 14 pressures, 11 quarterback hurries and two sacks. Still, Petit-Frere’s numbers looked strong overall as he ended the year with only 26 pressures, 22 hurries and two sacks allowed in 12 games.

The Draft Network’s scouting director Kyle Crabbs projected Petit-Frere as a third-round pick in the NFL Draft, calling the Ohio State prospect a top talent among this year’s prospects.

“Petit-Frere projects favorably to the next level as a starting tackle,” Crabbs said. “He’s a natural on the left side of the line, as his footwork and movement skills appear to be smoother when operating at the left tackle spot. We’ve had a good look at Petit-Frere in both settings. He was a full-time starter for the Buckeyes in 2020 at right tackle before transitioning to left tackle in 2021 and occasionally adding reps at right tackle for a series or two throughout the season.

“He has excellent physical tools and offers the kind of frame that is meant to play on the edge. He’s long, dense, and fluid as an athlete, offering a promising skill set for an NFL team to continue tinkering with to reach his high ceiling.”

However, Crabbs recognizes where the Tennessee might have to work with Petit-Frere. He pointed to Petit-Frere’s balance, competitive toughness, lateral mobility, length and football IQ as strengths but thinks his weaknesses lie within some much-too-frequent technical and instinctual lapses.

“Petit-Frere has overwhelmed most of his opponents with his blend of traits,” Crabbs said. “I like him best in a zone-heavy offense, as that’s what was executed most frequently at Ohio State, but I think he’s conceptually a scheme flexible player. He can drive block, step laterally and run backside cutoff, or he can take vertical sets in deep-set passing, which the Buckeyes did a lot out of play-action passing.”

Petit-Frere could become an integral part to the Titans’ offensive line with an immediate impact at the professional level. Or, he could spend time developing as he did as a freshman at Ohio State. Whatever becomes of his path, Petit-Frere has a new home in Tennessee, and he’ll get right to work in rookie camp and preseason training camp.