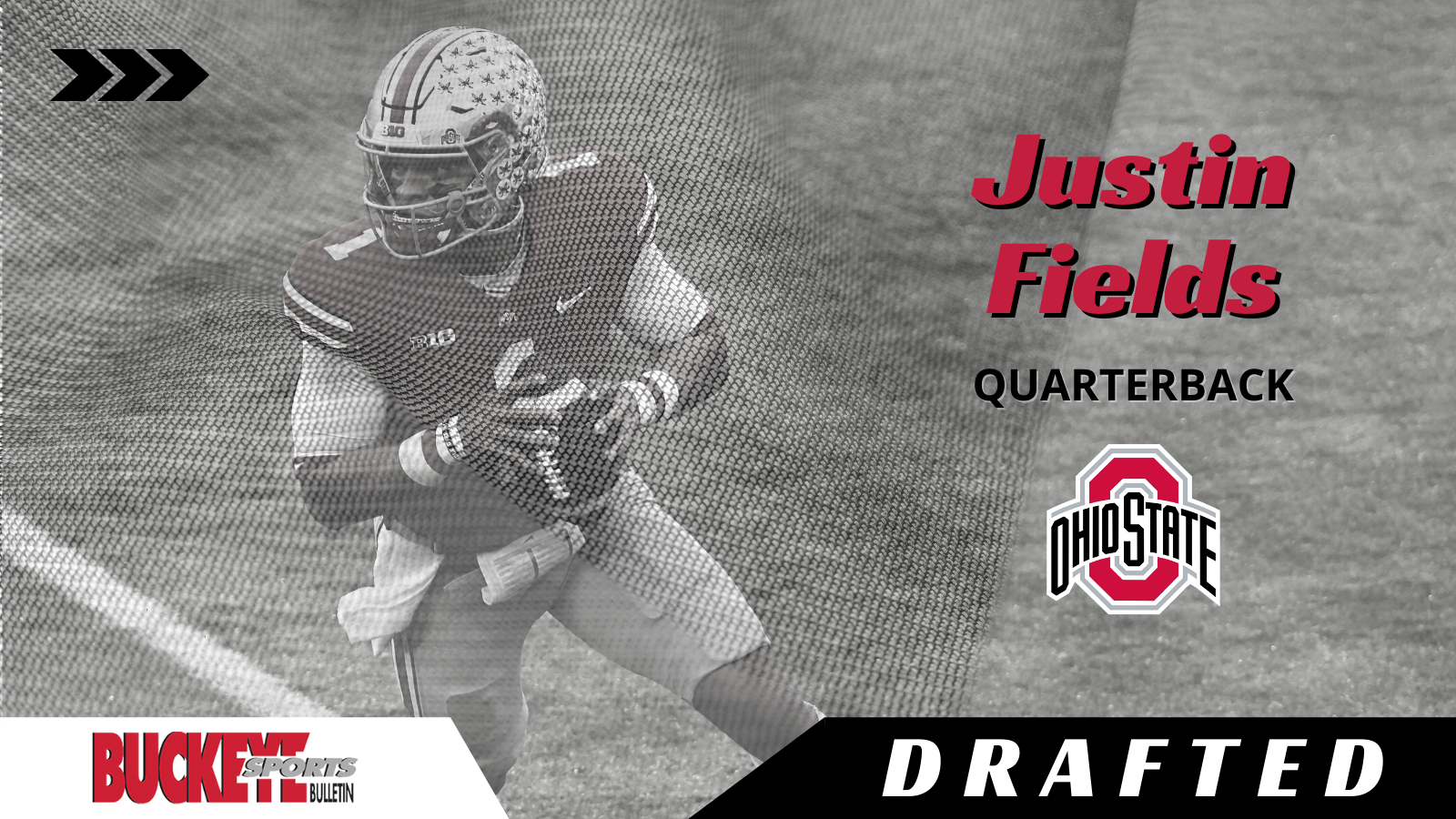 Justin Fields has his new team. After a wait that, to many, was longer than expected, the Buckeye signal caller was selected No. 11 overall by the Chicago Bears. He was the fourth quarterback off the board, following Clemson’s Trevor Lawrence, who was selected No. 1 overall by the Jacksonville Jaguars; BYU’s Zach Wilson, who the New York Jets selected at No. 2; and North Dakota State’s Trey Lance, who went to the San Francisco 49ers at No. 3.

The selection ends a nearly four-month discourse around Fields’ draft stock, which rose significantly after his playoff semifinal performance against Clemson, in which he threw for 385 yards and six touchdowns on 22-of-28 passing, with just one interception on the way to a dominant 49-28 victory. It also fluctuated wildly following a difficult end to the season in the national title game.

Originally considered the clear-cut No. 2 quarterback in the draft behind Lawrence, questions about Fields’ ability to read a defense and pick up pressure, as well as concerns about his work ethic moved him down analyst draft boards, dropping him to as far as the No. 32 pick in Chris Simms’ mock draft, released two days before the first round.

Thought Fields didn’t fall quite that far, the No. 11 pick is still much lower than was originally expected when he entered the 2020 season for Ohio State. It’s a fall that his former head coach, Ryan Day, adamantly disagreed with when asked about it.

“The whole idea that he doesn’t have a very good work ethic?” Day said. “I mean, to me, that’s crazy. He got done with the Clemson game [the loss in the college football playoffs in the 2019 season] and he came back and all he did was work to get back to that game. And when those other guys are opting out, what’s he do? He petitions to have a season. He put together this petition that the Big Ten athletes all signed saying that they want to play, but they want to play safely and that they don’t accept canceling the season. It was all led by Justin Fields. Where was everybody else? Where were the guys who were opting out then? You know, you don’t love the game if you’re doing something like that. This kid loves the game.

“I heard something about the last one to come in, first one to leave. First off, the scouts weren’t in our building all year. Last one in? Every morning, at least every morning we could be in the building, early, he’s in with [football sports performance czar] Mickey Marotti. The guys who were self-motivated and could do things on their own, those were the ones who made it. He was unbelievable. He changed his diet, he got stronger. He did better than most.”

A two-year starter for the Buckeyes after transferring to Ohio State from Georgia, Fields finished his Ohio State career with 5,373 yards, 63 touchdowns and just nine interceptions on a 68.4 percent completion rate. He was twice included among the top 10 Heisman finalists.

The Bears traded up from the No. 20 pick, moving into the 11 spot that was previously for the New York Giants. Chicago went 8-8 last season under quarterbacks Nick Foles and Mitch Trubisky, but had Andy Dalton as the expected starter for the 2021 season.