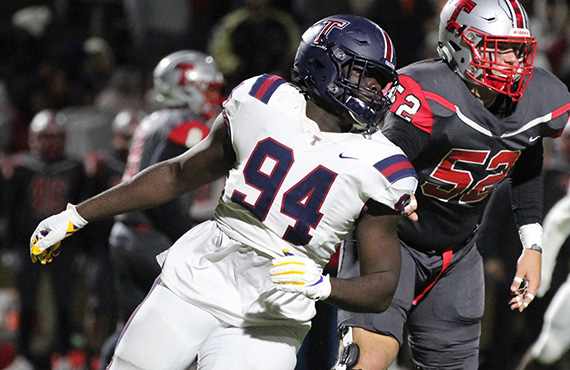 The Buckeyes, who already held the top recruiting class in the country, just added another to the list with the commitment of Tunmise Adeleye, a four-star defensive end out of IMG Academy in Brandenton, Fla.

“I want to thank God for blessing me with the talent to play the game that I love so dearly at the collegiate level. Today marks the beginning of a journey that I know will be life altering in nature. Without constant prayer and the guidance I’ve received from my family, and coaches close to me this decision would’ve been 10 times harder,” Adeleye wrote in a tweet. “I am thankful for the knowledge, wisdom and guidance that has been given to me throughout this process. I would like to thank THE Ohio State University and its coaching staff for believing in me and giving me the opportunity to further my academic and athletic career at their institution. I would like to also send a special thank you shoutout to coach Donnie Smith, my Mother and my Father for pushing me and guiding me at every stage of my career. I am eternally grateful.

“With that said after careful deliberation I would like to announce that I am 100% COMMITTED TO THE OHIO STATE UNIVERSITY #GOBUCKS.”

Prior to committing, Adeleye was favored to go to Oklahoma by the 247Sports Crystal Ball predictions, with Ohio State having just one prediction, tied for second with Texas and Alabama.

The 6-3, 240-pound Adeleye recorded 50 tackles, four sacks and one forced fumble at Katy (Texas) Thompkins last fall, and transferred to IMG Academy in January. There, he will be teaming up this fall with some of the Buckeyes’ top remaining targets, including four-star offensive tackle J.C. Latham and four-star cornerback Kamar Wilcoxson.

Ohio State now has 16 commits in its 2021 class, five more than any team in the Big Ten.