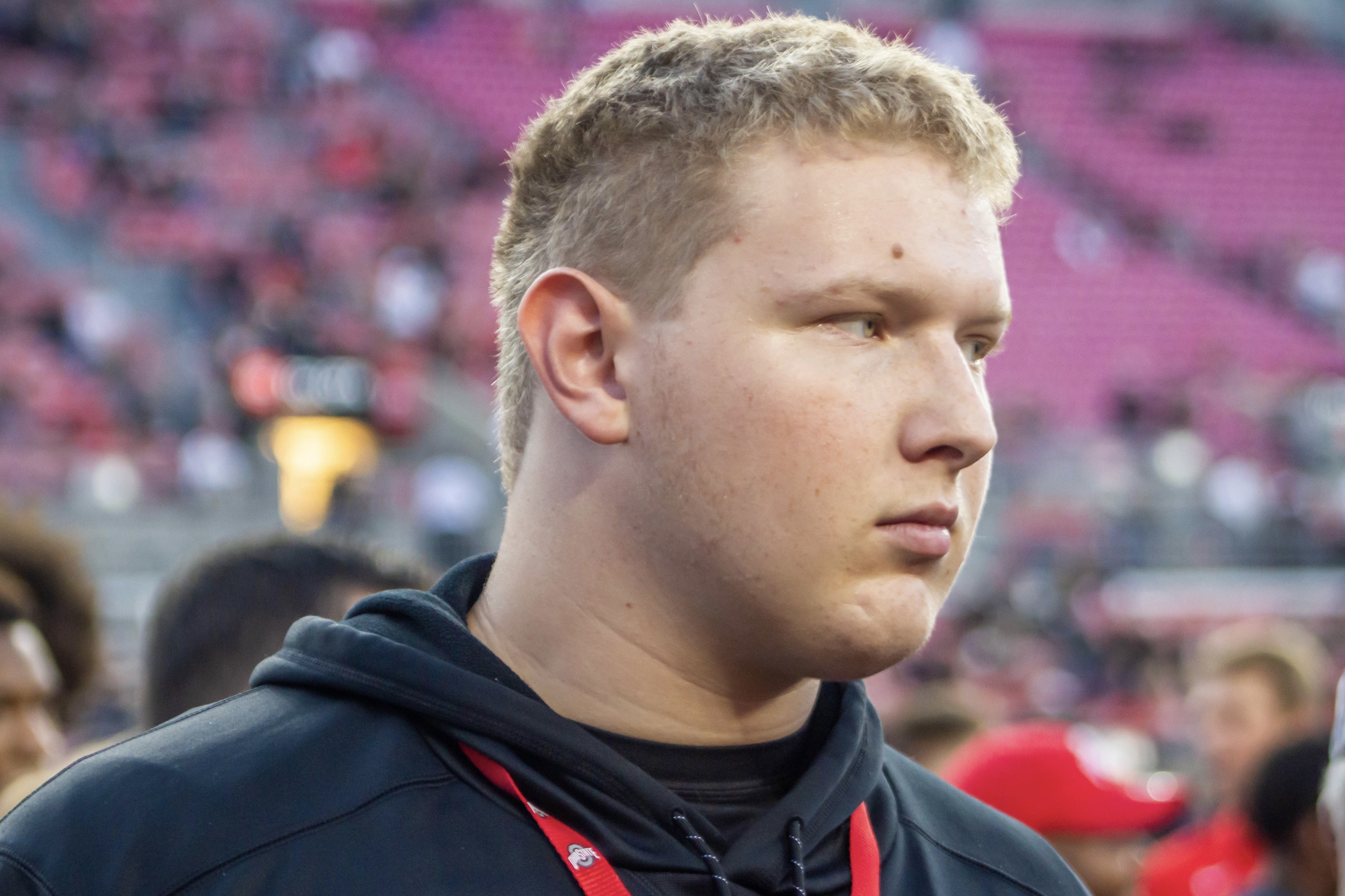 Toutant’s numbers might not blow scouts away but the ability to run a 4.77 20-yard shuttle at 6-foot-7 and 320 pounds is pretty impressive. He also recorded a 28.6” vertical leap, showing some of the athleticism that comes from his gymnastics and basketball background.

“Big frame. Tall, long arms, has filled in, but still has plenty of room to grow and add muscle. Good natural athlete. Has background in gymnastics and basketball, which shows in his footwork and flexibility. Did not play offensive tackle early in his high school career and has improved considerably the more he worked on the position. Gets out of his stance quick enough to handle speed rushers and moves well enough laterally to take away inside counter moves.

“Finishes in the run game and can make blocks in space. While he has improved, technique is still a work in progress. Getting stronger and being more violent in his punch will be key for him. Overall consistency in his game is something we want to see from him, but his upside is high. May need a year or two of development in college, but trajectory is headed towards that of a Power 5 starter and a potential next-level player,” Trieu said of Toutant.

The Michigan native is firm in his commitment to Ohio State, but he had previously been committed to Penn State. In fact, Toutant had been the Nittany Lions’ first 2020 commit when he pledged to play for James Franklin on Nov. 24, 2018.

Not only was Toutant the first commit in his class at Penn State, he was the class’s most active recruiter, helping secure pledges from five other offensive linemen.

When Ohio State offered Toutant on Jan. 17, he began reconsidering his decision. The 6-foot-7 offensive tackle took a few unreported trips to Columbus in the spring and then flipped his commitment to the Scarlet and Gray on June 9.

“I don’t have one specific reason I am making the switch,” Toutant told Lettermen Row following the flip. “It’s more a combination of things that are a better fit for me and my future. The mechanical engineering program and the ties they have with the automotive industry are one of the main reasons, but also the football program has always been at an elite level.

“Their attention to detail with training, nutrition, recovery, injury prevention and mentorship is something I have never seen before. I also felt a chemistry between the players and a culture that they live by which is very familiar to me. It’s something my high school team has that makes us champions. Each player works for the guy next to him, not just for themselves.”

Even though Toutant had become enamored with the culture at Ohio State, the decision to flip from Penn State was still very difficult. Ultimately, Toutant, who also held offers from Auburn, Indiana, Michigan State and Wisconsin, had to do what he thought was best for him.

“This was a very difficult decision because I wanted to stay loyal to my commitment, but knew in my gut that I had to at least explore the opportunity,” Toutant told Letterman Row. “Penn State has done an amazing job not only recruiting me, but also involving my entire family in the process and making us all feel like a part of their family.

“I have always been taught that everything happens for a reason. And when the offer to play for Ohio State presented itself, after my Penn State commitment, I knew that it was an opportunity I could not overlook. It has always been a dream offer of mine that at the time I didn’t think I would ever receive.”