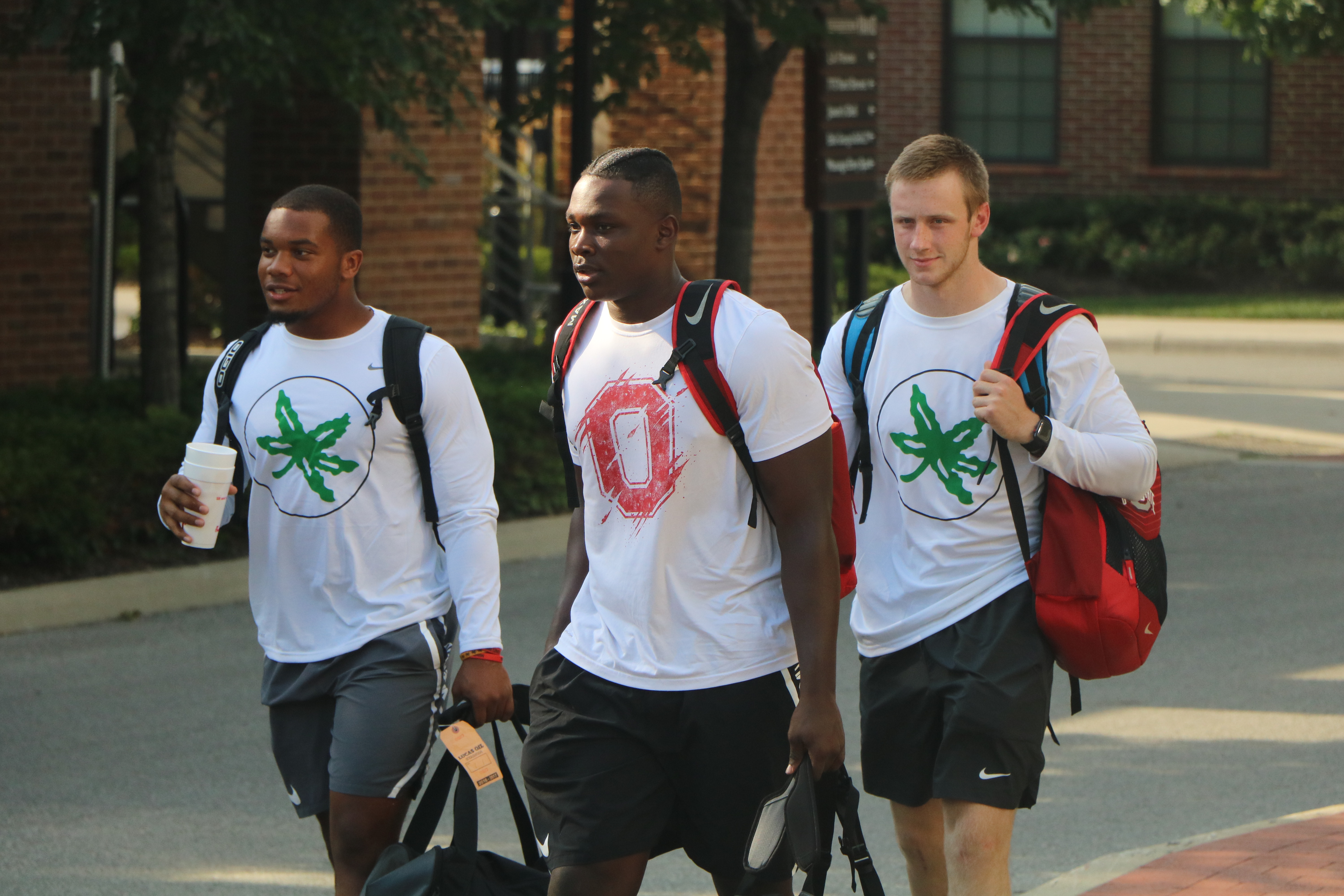 After freshman linebacker Dallas Gant shed his black stripe Wednesday at the Woody Hayes Athletic Center, where Ohio State wrapped up its fifth practice of fall camp, two teammates joined him Thursday when the Buckeyes completed their sixth workout over on the grass fields of Coffey Road Park.

Ryan Stamper spoke highly of Mitchell when the OSU director of player personnel acknowledged the 6-2, 236-pounder.

“Some guys shy away when we get the pads on,” Stamper said. “This guy stepped in when we got the pads on. Teradja Mitchell, get up here.”

As junior linebacker Justin Hilliard ripped the stripe off the helmet, Mitchell shared some short sentiments with his coaches and teammates.

“Thank all y’all guys for pushing me,” Mitchell said. “Thank the unit. Thank all the coaches. Go Bucks.”

⬛️???? “That boy love to hit‼️” Congrats to @7eradja on getting that black stripe off‼️

Mitchell committed June 2, 2017, to Ohio State and bolstered the Buckeyes’ 2018 recruiting class greatly with his addition. He inked his National Letter of Intent during the early signing period Dec. 20 as a four-star recruit from Virginia Beach (Va.) Bishop Sullivan. The 247Sports composite rated him as the No. 44 overall player, No. 2 inside linebacker and No. 2 player in Virginia.

Mitchell joined the Buckeyes in June when he enrolled for the summer. He entered a step behind the other two freshmen to have had their stripes removed since they enrolled early in the spring — Gant and defensive tackle Tommy Togiai — but Mitchell evidently impressed enough through OSU’s first six practices and became the first summer enrollee to earn the honor. With sophomore Tuf Borland limited as he works his way back from an Achilles injury sustained in spring camp, Mitchell competes at middle linebacker beside Hilliard and sophomore Baron Browning.

Duarte, on the other hand, joined Ohio State in the spring as a walk-on addition. Originally from Poland (Ohio) Seminary, he started out at the FCS level with St. Francis in Loretto, Pa., for the 2015 season. Duarte then transferred to the Division-II ranks with Ohio Dominican in Columbus across the 2016 and 2017 campaigns.

The 6-5, 248-pounder thanked the team for its family feel from when he stepped foot on campus to now.

“Hey, I really appreciate you guys bringing me in like family last year,” Duarte said. “I want to shout out all the tight ends and all the coaches. Hey, go Bucks.”