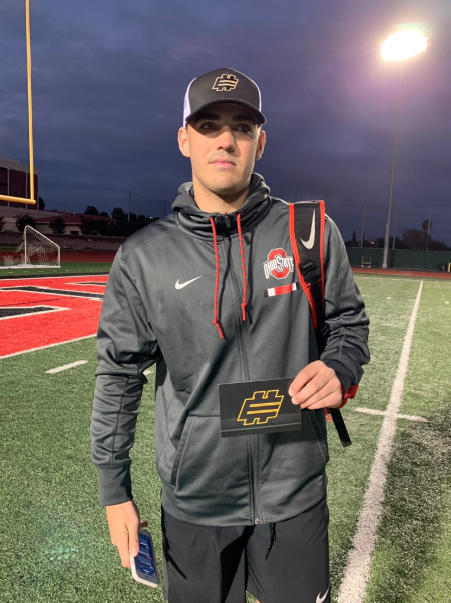 The future of Ohio State’s quarterback room is bright.

While the Buckeyes boast sophomore Justin Fields, redshirt freshman Matthew Baldwin and fifth-year senior Chris Chugunov as the three scholarships on their roster when spring camp starts the week of March 4, they welcome in Scottsdale (Ariz.) Chaparral four-star Jack Miller soon after the 2019 season.

Until he comes to Columbus for 2020 enrollment, Miller continues to pile up the accolades with one year left of high school, including his latest achievement Sunday at The Opening Los Angeles Regional.

The 6-4, 210-pounder picked up QB MVP and became the first of two signal callers selected to the Elite 11 Finals this summer after his camp performance at Long Beach (Calif.) Community College.

The finals typically take place on the first weekend in June from Redondo Beach, Calif., commencing once Nike Football’s The Opening completes its regional camps, which run until May 19.

Committed to OSU since July 1, Miller gave head coach Ryan Day the 247Sports composite’s No. 65 overall prospect, No. 4 pro-style quarterback and No. 4 player in Arizona for the 2020 recruiting class.

Miller remained solid to Ohio State after former head coach Urban Meyer announced a Jan. 2 retirement at a Dec. 4 press conference, providing a cornerstone pledge as Day has worked over the past two months to keep most of the 2020 group together.

“He’s super poised,” Miller’s private trainer, Dennis Gile, told BSB. “I don’t think much bothers him, so that’s a good strength to have as a quarterback — to have that no-flinch mentality and that ‘it’ factor and I think he has that. He’s got a very strong arm that can push the ball down the field very accurately. So I think his deep ball is very, very well thrown and on target and on time.

“I think his intermediate throws and how he can put touch on the ball while being able to get it there on time with efficiency and consistency, I think he does that very well. I think he’s got a lot of strengths. He’s overall a good quarterback in a lot of categories.”

As a junior in 2018 at Chaparral, where he starred next to fellow future Buckeyes and 2020 four-star running back Darvon Hubbard (6-0, 200), who committed July 25 to OSU, Miller guided Chaparral to a 5-3 start before he suffered an injury to his left knee Oct. 12 in a 42-24 loss at Phoenix Mountain Pointe kept him out for the Firebirds’ final three games of the season.

Before the team fell to 5-6 on the campaign, losing the subsequent three contests after the injury sidelined Miller, he lit up his competition. Over eight games, Miller completed 141 of his 256 passes (55.1 percent) as he amassed 2,431 yards and 27 touchdowns to six interceptions in first-year head coach Brent Barnes’ offense.

“You don’t get to the level that he’s at with recruiting and a place like Ohio State without being extremely talented and gifted, so (Miller) is just that,” Barnes told BSB. “He kind of just has a unique skill set where he has a little bit of everything. He has really, really good arm strength, great size and then can move around well also.”