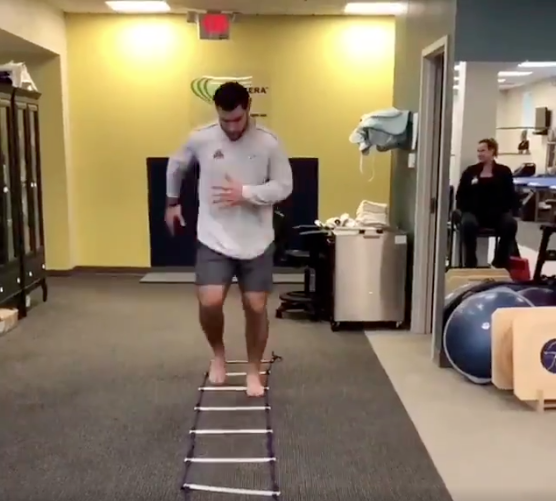 Nick Bosa‘s status for Ohio State down the stretch remains unknown until he takes his re-evaluation visit in November, but the junior defensive end appears to be making strides as the road to recovery begins.

While the Buckeyes were without Bosa last Saturday in their 27-26 triumph at Penn State, he continued to attack his rehabilitation process at Vincera Institute in Philadelphia. Bosa has been at the facility since Sept. 20 surgery to repair a core muscle injury, but his hopeful road back to OSU is well underway.

In a workout video published Sunday on Twitter, he was shown tapping his feet in an agility ladder. According to the tweet, Bosa was cleared for jogging about 10 days after the operation.

While the indefinite absence sidelines Bosa (6-4, 263) at least for all of October — Ohio State plays Oct. 6 vs. Indiana, Oct. 13 vs. Minnesota and Oct. 20 at Purdue before its Oct. 27 off week — junior Jonathon Cooper and sophomore Chase Young have highlighted the Buckeyes’ performers at defensive end.