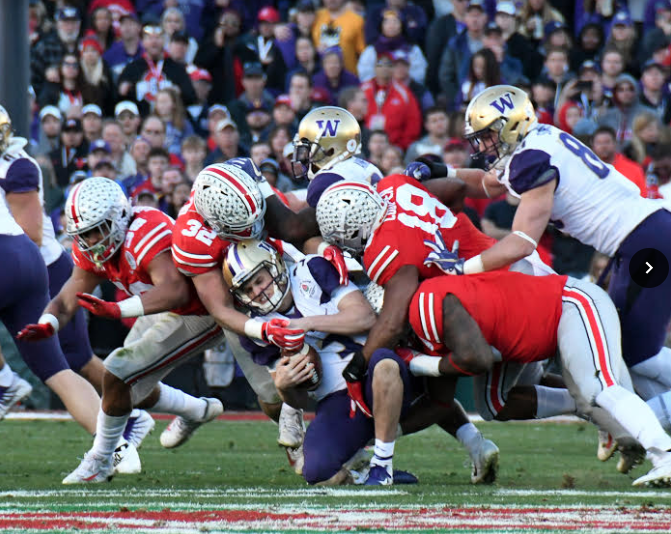 PASADENA, Calif. — After an 18-point lead at halftime, Ohio State appeared well on its way to a Rose Bowl rout Tuesday against Washington. Things slowed down in the third quarter, though, leaving for an interesting finish before the No. 6 Buckeyes ultimately edged the No. 9 Huskies for a 28-23 victory and sent retiring head coach Urban Meyer out on top in “The Grandaddy of Them All.”

How did OSU (13-1) jump out to its early lead and take control of UW (10-4) before the second-half comeback attempt? BSB takes a closer look at Ohio State vs. Washington with an examination of what worked well, what didn’t work and the play of the game from Rose Bowl Stadium.

The pass offense. Dwayne Haskins didn’t miss a beat after a month-long layover since the Dec. 1 Big Ten Championship Game against Northwestern, a 45-24 win over the Wildcats, as the sophomore quarterback carved Washington‘s 21st-ranked pass defense (185.4 yards allowed per game) for 251 yards and three touchdowns on a 25-of-37 (67.6-percent) clip. Haskins hit nine different targets with fifth-year senior H-back Parris Campbell (11 receptions for 71 yards), fifth-year senior wide receiver Johnnie Dixon (two receptions for 27 yards) and junior tight end Rashod Berry (one reception for eight yards) among the receivers to haul each of his scores. The Huskies, who entered the Rose Bowl ranked 12th in total defense (301.8 yards alowed per game) were arguably the best defense Haskins has faced over the course of the 2018 season and he still managed to make the Buckeyes’ offense picked up where the unit left off.

The offensive line. While junior Joshua Alabi filled in admirably for sophomore left tackle Thayer Munford, who didn’t dress with an undisclosed injury, OSU was out of sorts at times up front. Ohio State committed nine penalties for 53 yards, with false starts in abundance while Washington got after Haskins for three sacks. Junior running back Mike Weber ran hard with 15 carries for 96 yards, but the Buckeyes struggled to consistently open up the ground game with only seven totes for 24 yards by sophomore running back J.K. Dobbins outside of his three-yard touchdown plunge he had that made it 28-3 with 8:23 left in the third quarter. OSU even tried Demario McCall for a spark, but the sophomore H-back only managed two touches for 12 yards. The inconsistency up front slowed Ohio State’s offense and kept the Huskies hanging around.

All season long, the Buckeyes’ defense has been a glaring weakness, but they made their stops when the stakes were highest down the stretch. OSU’s offense stalled throughout the fourth quarter, allowing UW to creep back into the ballgame behind a pair of Myles Gaskin touchdowns — one passing and another rushing — in the final seven minutes. Washington might have been able to take the lead on one of those had its offense mounted one more scoring drive between those Gaskin scores. The Huskies had the ball on their own 15 with 4:57 to go, picking up seven yards on Jake Browning to Andre Baccellia on first-and-10 before an incompletion on second-and-3 from the 22 brought up a critical third-down situation for Ohio State. On that third-and-3 from UW’s own 22, Browning found Gaskin out of the backfield but sophomore safety Brendon White blew up the would-be conversion for a five-yard loss. The Buckeyes’ contingent at Rose Bowl Stadium erupted and Washington punted away, symbolic of the key stops OSU’s defense recorded throughout the second half when its production on offense plateaued.