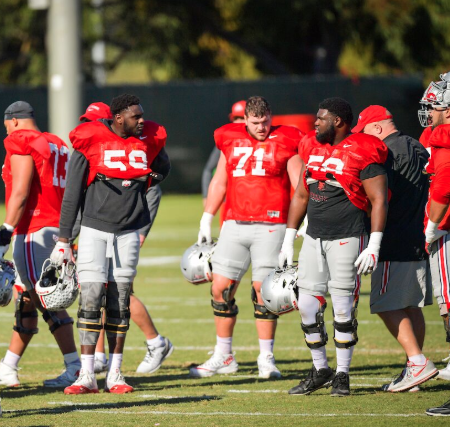 PASADENA, Calif. — In the thick of Ohio State’s center competition ahead of the 2018 season, Josh Myers spent his spring and summer battling for the right to replace 2017 Rimington Trophy winner and one-year starter Billy Price.

The natural competitor in Myers might not have made the realization when the redshirt freshman was snapping for the first-team spot with fifth-year senior Brady Taylor and junior Matthew Burrell in the spring, but he needed to take a step back again and watch during his second year in Columbus.

By fall training camp in August, Myers was among the last standing at center — Burrell transferred in May to FCS-level Sam Houston State and Taylor had arthroscopic knee surgery in August — before the Buckeyes moved junior Michael Jordan from left guard.

“In hindsight — as hard as it is for me to say this — I probably needed this season,” Myers told BSB at Ohio State media day Sunday outside Rose Bowl Stadium. “Center is something that you have to have so much knowledge about the offense and just so much understanding and be able to have the confidence to call things out and know that you’re right. I probably needed it. I probably needed a season — to be completely honest — to be my best.”

Ohio State flew out to Los Angeles last Tuesday night and spent the subsequent five days of practice at StubHub Center in Carson, Calif., where Myers continued to work with the first-team offense as fifth-year senior left guard Malcolm Pridgeon progressed back to 100-percent health after an undisclosed injury.

“Malcolm was out there for a little while, unfortunately, so they slid Mike over earlier on in bowl practices at guard and put me at center for the first few weeks of bowl practice and it was great getting to work with some of the first-team guys,” Myers said. “That was huge for me. It helped a lot.”

Jordan told reporters Saturday at the Residence Inn LA Live that if he comes back for 2019, declining early entry into the NFL draft, his preference is to play guard — where he started 27 games throughout his first two seasons — over center.

“Josh Myers has been probably, to me, as pleasant a surprise,” offensive line coach Greg Studrawa told BSB. “About halfway through this season, the (Oct. 27 off) week, is probably when I noticed a different attitude in him, a different focus in him, a different level of confidence in him that he hasn’t had before. I think a light switch kind of finally went off with him. Since then, he’s taken off. That’s part of the reason I think Mike knows he can move back. It’s about getting a guy like Josh on the field now because it is his time.”

Since high school, however, Myers has developed his all-around game — specifically at center — after he was ranked the 247Sports composite’s No. 53 overall prospect, No. 2 offensive guard and No. 1 player in Ohio as a four-star recruit for the 2017 class.

“Josh Myers is so close (to being ready),” outgoing head coach Urban Meyer said Nov. 26. “He’s had a great month and half of practices.”

Myers spent his first season studying Price closely, but not until the one-year mentor left did he take — inadvertently — perhaps the most imperative piece of advice to date.

“I’ve learned a ton of stuff — I haven’t just learned little things either,” Myers said. “Obviously, being a center, more so than any other position on the offensive line, there’s little things that you just learn as you go on that make a difference. Just little nicks, like how you hold a ball.

“In practice five, in the spring, my snaps hadn’t been great. Didn’t have a problem since, haven’t had a problem since. So just little things like that, that make a bigger difference than you would think.”

Miamisburg, Ohio, pulled Myers left and right as a guard in its Wing-T offense — a polar-opposite scheme when linked with the pass-heavy approach OSU has adopted under second-year offensive coordinator/quarterbacks coach Ryan Day and sophomore quarterback Dwayne Haskins — but the stark contrast forced him perfect his craft in pass protection.

“You have to adapt a lot,” Myers said. “Obviously, we passed the ball three or four or five, six times a game (in high school). That was it, every game. So if you really think about it, that throughout the course of the season is not a lot of pass plays. So that was definitely a big hump I had to get over.

“But then there’s other things, too. There’s the speed of the game in college. How fast? We’re in no huddle, tempo kind of offense. So you play a ton faster than my high school did, so all of that is stuff you have to get used to. Mentally, it’s much more challenging, obviously. So all of that together makes it very challenging.”