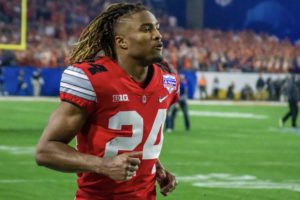 Ohio State cornerback Shaun Wade, who said he was opting out of a potential football season and declaring for the 2021 NFL Draft on Sept. 14, announced on Thursday that he wants to opt back in and play for the Buckeyes in the upcoming season.

Wade, who was named to the watch lists for the Bednarik Award, Nagurski Trophy, Thorpe Award, and Lott IMPACT Trophy, had high expectations for the 2020 season, but the uncertainty pertaining to whether the Big Ten would actually play pushed him toward opting out.

“Being a student-athlete at the Ohio State University has been the greatest experience of my life. It has given me the chance to excel on the football field, earn my college degree, and it has helped me become the man that I am today. For that, I am forever grateful,” Wade said in his opt-out statement Sept. 14. “After much prayer and consideration, I have decided to declare for the 2021 NFL Draft.

“Given the circumstances and uncertainty surrounding the 2020 season, I know in my heart that the best decision for my future is to begin preparing for the next chapter in my life.”

Wade, who was named a preseason All-American by numerous outlets, experienced a change of heart once the Big Ten reversed course and reinstated the fall football season.

Now a fourth-year junior, Wade became one of the most productive defensive players in the country as a redshirt sophomore in 2019. The former five-star prospect from Jacksonville (Fla.) Trinity Christian Academy enters presumably his final season with high expectations after returning to Columbus despite receiving first-round draft grades.

Wade led Ohio State defensive backs with four tackles for loss and two sacks out of his 25 tackles (16 solo), earning him third-team All-Big Ten honors. The versatile corner also forced one fumble, picked off one pass and tied for second on the team with eight passes deflections.

Showing his playmaking ability as an underclassman, Wade led the Buckeyes with three interceptions as a redshirt freshman in 2018. He also tied for fourth on the team with seven pass breakups and recorded one forced fumble to go with his career-high 31 tackles (27 solo).

Prior to coming to Columbus, Wade was highly touted as the fourth-ranked recruit in the talent-rich state of Florida and the No. 17 overall prospect in the country. The only cornerback ranked ahead of Wade for 2017 was former teammate Jeff Okudah, who was the No. 3 overall pick in the 2020 NFL Draft.