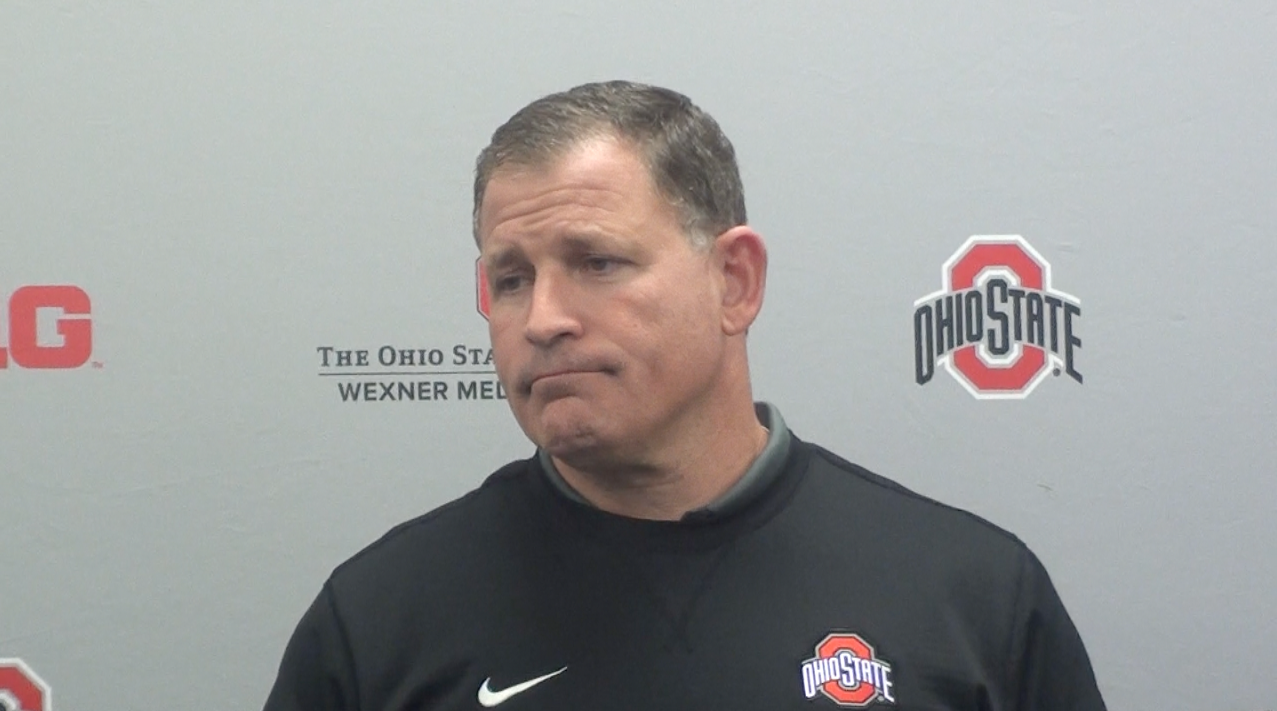 Before Ohio State resumed practice its latest practice of the week Wednesday at the Woody Hayes Athletic Center, defensive coordinator Greg Schiano met the media in the team room and provided in-depth answers on questions about the defense after Purdue’s 49-20 rout last Saturday knocked off the then-No. 2 Buckeyes.

Back to the drawing board for the Oct. 27 off week, head coach Urban Meyer told reporters Tuesday on the Big Ten coaches teleconference that he kept his coordinators in Columbus instead out recruiting with the rest of the staff as OSU (7-1, 4-1) aimed to correct the issues that plagued it against the Boilermakers (4-3, 3-1).

With the linebackers, missed tackles and coverage schemes among those perceived problems, Schiano explained how he and his fellow defensive coaches have reacted after reviewing the tape and considering potential fixes down the stretch of the season into November as the team cleans up for Nov. 3 vs. Nebraska (1-6, 1-4).

“There are different times this year where we have walked up one linebacker into the line of scrimmage. We actually moved away from that last week. If you study the game, watch the game last week, there was a few times in base defense they were walked up. Third down and when you’re doing some exotic blitzes and things, we’re going to have them walked up. We always have, when you get in the gaps, and most teams do that. But it’s more first and second down base defense where we’ve done some things.

“It’s a lot of positive that can come out of that if you can get good at it, the main one being getting double teams off your defensive line instantly. But it’s not something that we thought our guys — we thought as we went through the season we would get more and more comfortable with it. That hasn’t been the case. Saturday we really limited it and picked our spots to do it, to times that play to set up to do that. We’ll probably continue to do that. I understand, when you struggle, people want to say, ‘That’s the reason. Let’s go.’ Well, there’s no one reason. The truth of the matter is that we’re actually making progress in all areas.”

“We missed 20 tackles last week. We haven’t missed 20 tackles since we’ve been here. When you say, ‘What are you working on?’ This week that became an emphasis where it really wasn’t an alarming issue. We were in the single digits all the time and sometimes the low singles digits, and that’s what you look at. As a coordinator, you want to make sure that your team is tackling at that level of efficiency. Let’s give our opponent some credit, but for whatever reason, we tackled as poorly as we’ve tackled in at least in my tenure here. So there’s a whole bunch of things.

“This week has been a great week. Yesterday’s practice was great to work on certain things. It’s week (nine), so it’s eight games in. You’re not going to wholesale change your schemes. Nor should we. But there’s things we can tweak to help them. There’s an opportunity to talk with your guys where there’s not this impending, ‘You’ve got to get ready for the game,’ and to talk as a staff and that we did. Monday, we spent a really good day — Monday and (Tuesday) — looking at ourselves, not worrying about anyone else but just, ‘What are we doing? How can we help?'”

“In the RPO (run-pass option) world which we live in now, you need to be at some degree man. If you don’t, there’s too much space, they pull the ball out and throw it. So we, traditionally around here, have been a man team, whether it was man quarters or man single high. We have played more zone this year than we have in the past. Can we play more of it? Sure, we can. Might that aid and assist some guys that are maybe not right, ready to play 60, 70 snaps a game? Without a doubt.

“That’s all a part of what we say tweaking what we’re doing, but to say that you’re going to come out and see a Tampa 2 zone team 60 plays a game, that won’t happen and we don’t want it to happen here. So it’s more tweaking than, say, ‘Are we going to become a zone team every down?’ The answer is no, we’re not going to do that. Can we do some more of it in some creative ways? I think the answer is yes.”