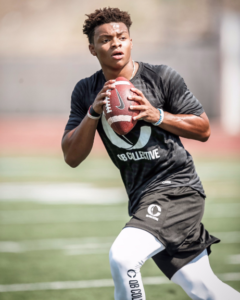 A decision from the NCAA on Justin Fields‘ hardship waiver and immediate eligibility for 2019 is expected to come sooner than originally anticipated, according to the Ohio State quarterback’s lawyer.

Arkansas-based attorney Tom Mars, who represents the former Georgia signal caller, told The (Toledo) Blade’s Kyle Rowland on Tuesday that a resolution on Fields is believed to come in February — before head coach Ryan Day and the Buckeyes begin spring camp in March.

“Unlike the situation with the Ole Miss transfers, the process of obtaining a waiver for Justin isn’t going to drag on for months,” Mars said.

“This is a high priority for Coach Day, and it’s my top priority at the moment. I’m confident the process will move quickly and that the NCAA will be able to make a decision on OSU’s waiver request much sooner than most people might think.”

Speculated as support for his argument is the incident in Georgia’s 39-12 win over Tennessee on Sept. 29 when Adam Sasser, an all-conference first basemen for the Bulldogs’ baseball team, allegedly shouted racial slurs at Fields. UGA dismissed Sasser from its baseball program, an offseason option Fields was considering as a highly-touted shortstop prospect and two-sport athlete in high school, but Rowland reported that Fields felt uncomfortable joining the team.

Reports of Fields’ exit from Athens, Ga., surfaced on Dec. 18 with Columbus among his preferred destinations. Fields signed with the Bulldogs’ 2018 recruiting class as the 247Sports composite‘s No. 2 overall prospect, No. 1 dual-threat quarterback and No. 2 player in Georgia from Kennesaw Harrison — behind only Cartersville’s Trevor Lawrence (6-6, 215), the No. 1 pro-style quarterback, who became Clemson’s starter and led the Tigers to the 2019 College Football Playoff national championship in a 44-16 rout of Alabama on Monday — but was blocked by incumbent starter Jake Fromm (6-2, 220).

Fields and Lawrence competed in the summer of 2017 at the Elite 11, where Fields edged Lawrence for camp MVP. Discussing the two on Tuesday with 92.3 The Fan in Cleveland, Atlanta-based trainer Quincy Avery pointed to Fields against Lawrence as a unique talent.

“The display that Justin Fields put on was better than any QB that I’ve ever seen over those four days that he was out there,” said Avery, who added that Fields has 4.5-second speed in the 40-yard dash.

Should he receive his hardship waiver and eventually win the job at starting quarterback, Fields might be able to have the same instant impact at OSU as Lawrence provided for Clemson.

Fields announced his transfer last Friday, enrolling in classes for the spring semester on Monday and starting the countdown for whether or not he will be granted immediate eligibility from the NCAA.