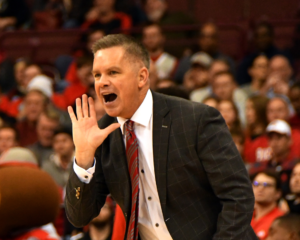 “Our effort wasn’t quite what it needs to be, for sure,” Ohio State head coach Chris Holtmann said. “We’ll have to fix that, certainly going into Thursday. But give Penn State credit for the win.”

Sophomore guards Luther Muhammad and Duane Washington returned to the team following a one-game suspension and came off the Buckeye bench. Muhammad scored six points by making 6 of 6 foul shots, while Washington tied his career high with 20 points on 6-of-10 shooting, hitting 3 of 5 triples and 5 of 6 free throws.

“He was able to make some shots, but the game was a little bit always out of reach,” Holtmann said of Washington. ” Defensively, Luther gave us some deflections. Duane made some shots, but it’s hard to look at it individually in this case right now.”

Ohio State took a 4-3 lead on a fastbreak layup by Kaleb Wesson from junior guard C.J. Walker two and a half minutes into the game. Penn State responded with an 11-0 run, with five points from senior forward Mike Watkins and two triples, while holding the Buckeyes scoreless for 4:43.

Washington ended the scoring drought with a three-pointer, but the Nittany Lions clamped down defensively again and went on a 7-0 run, led by five from Stevens and spanning 4:34.

“We just didn’t come out with enough energy to begin with and dug ourselves in a hole, and it’s tough to climb out of those, especially in road environments,” Washington said. “And they were making some tough shots.”

Stevens paced the Nittany Lions in the first half, scoring 10 points on 4-of-8 shooting with two blocks and two triples. Kaleb Wesson led the Scarlet and Gray with 12 points on 5-of-9 shooting and three rebounds.

Stevens picked up where he left off to open the second half, scoring just 18 seconds into the final frame. However, the Nittany Lions’ standout forward picked up his third foul 21 seconds later and took the bench with his team up 17 points. Stevens sat out for nearly six minutes, checking in at 13:43 with Penn State leading by 16.

Immediately after Stevens checked out, Andre Wesson hit back-to-back triples to cut the Penn State lead to 11, but that was the closest Ohio State would come. Penn State pushed its lead to as many as 20, and Ohio State cut it to 13 after that point, but could not string enough stops together to close the gap.

“They played harder than us today and made more shots,” Andre Wesson said. “When you’re on the road, you know they’re going to be comfortable, so making that team uncomfortable is key. And we didn’t do that today.”

Ohio State freshmen D.J. Carton and E.J. Liddell made some plays for the Buckeyes, with Carton scoring nine points and dishing a career-high six assists, and Liddell posting eight points.

“That was our worst defensive effort of the year, but give them credit,” Holtmann said. “They made a lot of shots and they made it difficult for us. It certainly was (difficult).”

The Buckeyes will look to get back on track on Thursday, Jan. 23 at home against Minnesota, who gave Ohio State its first loss on Dec. 15.