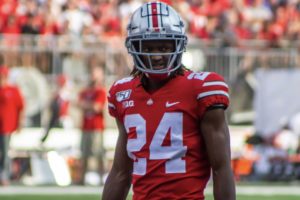 Wade is one of 98 players to be named to the watch list for the Nagurski Trophy, which honors the top defensive player in the country annually. There were 10 selections from the Big Ten.

A Jacksonville, Fla., native, Wade thrived as defensive playmaker during his redshirt sophomore season in 2019. Despite receiving first-round draft grades, he returned to Columbus with high expectations from both himself and others.

As a third-year sophomore, Wade  showed his versatility, forcing one fumble, picked off one pass and tied for second on the team with eight passes deflections. The Jacksonville Trinity Christian Academy product led Ohio State’s defensive backfield with four tackles for loss and two sacks out of his 25 tackles (16 solo) to earn a spot on the All-Big Ten Third Team.

The versatile corner has displayed a propensity for big plays, leading the Buckeyes with three interceptions as a redshirt freshman in 2018. He also tied for fourth on the team with seven pass breakups and recorded one forced fumble to go with his career-high 31 tackles (27 solo) that year.

The Buckeyes boast two former Nagurski Trophy winners in James Laurinaitis, who won in 2006, and Chase Young, who won in 2019. Young and Jordan Fuller were named to the preseason watch list a year ago.

Prior to the Nagurski watch list, Wade was already named to the watch lists for the Bednarik Award, which honors the nation’s top defensive player; Thorpe Award for the top defensive back; and Lott IMPACT Trophy, awarding the defensive player who makes the most IMPACT, which stands for Integrity, Maturity, Performance, Academics, Community and Tenacity.

CB @shaunwade24 is on the watch list for the @NagurskiTrophy, which goes to the outstanding defensive player in college football. That's four watch lists now for Wade, including the Bednarik, Thorpe and Lott IMPACT awards. @OhioStateFB. @TheFWAA.

Additionally, he was named a preseason first-team All-American by multiple outlets including Sporting News.