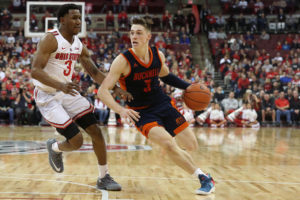 Jimmy Sotos, a Bucknell transfer, had his waiver for immediate eligibility at Ohio State denied by the NCAA. The Buckeyes will appeal the decision.

At Bucknell, Sotos led the Bison with 11.5 points per game and 3.9 assists per outing as a junior in 2019-20. The 6-foot-3, 200-pound guard wanted to transfer to a high-major program to conclude his collegiate career after Bucknell went 14-20 last season.

Sotos committed to head coach Chris Holtmann and the Buckeyes after also receiving interest from Gonzaga, Minnesota, Missouri, Vanderbilt and Xavier, among other programs. The mutual interest between Sotos and Ohio State was strong, with the former Bucknell guard entering the transfer portal on April 3 and becoming a Buckeye on April 6.

In an interview with The Dispatch, Sotos said he expected to sit out the season before playing for the Buckeyes in 2021-22. Holtmann and Ohio State have opted to pursue immediate eligibility for Sotos, given a lack of depth in the backcourt.

“When I came to Bucknell, I played right away as a freshman,” Sotos told The Dispatch. “I’ve had three years in a row where I’ve played a lot. I’ve only missed two games in my three years, so to sit out a whole year is definitely going to be tough but it’s going to make me hungry and excited and I think it’ll be well worth it.”

Throughout his Bucknell career, Sotos averaged 8.1 points, 3.9 assists and 3.4 rebounds in 28.2 minutes per game across 100 contests. The Elk Grove Village, Ill., native started all but one game during the final two years of his Bison tenure.

Sotos brings a versatile skillset to a shallow backcourt, which features fifth-year senior C.J. Walker and junior Duane Washington Jr. with Utah State graduate transfer Abel Porter as the lone backup guard. Though the Buckeyes do not have many typical guards on the roster, junior wings Justin Ahrens and Musa Jallow can also fill in, as well as freshman Eugene Brown.