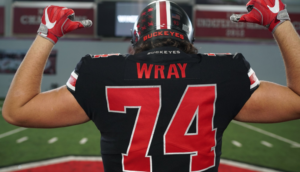 Citing the Buckeyes’ “major” coaching change with offensive coordinator/quarterbacks coach Ryan Day replacing head coach Urban Meyer, who announced Tuesday his retirement effective after No. 6 OSU (12-1) plays No. 10 Washington (10-3) in the Rose Bowl on Jan. 1, Wray decided he needed to “re-evaluate” his recruitment.

Wray, whose older brother Max Wray is a freshman offensive tackle for Ohio State, thanked Meyer and offensive line coach Greg Studrawa for the opportunity and said he planned to keep the Buckeyes in consideration as his process plays out and OSU undergoes its transition to Day.

“I want to wish Coach Meyer the best on his retirement,” Wray’s tweet read. “Being recruiting by him has been an honor. Building a relationship with Coach Meyer, Coach Stud and the staff at OSU has meant so much to me. My family & I are thankful for their time and investment in me as a player and student. This has been a challenging decision, especially with my brother being on the time, but committing early had only one big loop hole for me – no major coaching changes. As the programs adjusts, I need to de-commit and re-evaluate my recruitment. Ohio State is still one of my top schools. Buckeye Nation you are the best and I want to thank you for your support. This has not been easy and I ask you please respect my decision. No interviews at this time.”

The younger Wray was Ohio State’s first commitment for 2020 when he announced his pledge to the Buckeyes on April 23. The 6-5, 290-pounder most recently made an unofficial visit to campus in Columbus for OSU’s 62-39 rout of Michigan on Nov. 24.