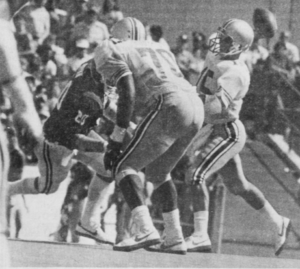 Without Ohio State football to watch this fall, Buckeye Sports Bulletin will be putting together a look back at some of the most consequential Ohio State games of the last 40 years, including a throwback film study. Today’s film study focuses on Ohio State’s 24-14 win over Oklahoma in 1983. Video is from this cut-up. The most recent film study can be found here.

When Ohio State travelled to Norman to take on Oklahoma in 1983, college football defenses had already started to develop a pretty solid understanding of Barry Switzer’s wishbone offense and how to best slow it down. Because of the nature of the system, it was pretty much impossible to truly shut down, but defenses had realized in the early 1980s that putting speedier players at linebacker behind a massive front four or five served pretty well to cause Oklahoma issues offensively.

That was a big contributor to Switzer’s dry-spell from 1981-1984, when, after going 83-9-2 in Switzer’s first eight seasons as head coach, the Sooners put up a just a 32-14-2 record. Part of that was due to a drop off in talent, but a bigger issue for Switzer was the adjustments that defenses had made to his once dominant wishbone attack. The Sooners would bounce back after 1984 and field several more dominant teams before Switzer’s departure, but Ohio State managed to catch Oklahoma in a bit of a valley by matching up in 1983.

The Buckeyes took advantage. Even against an ultra-talented backfield that featured quarterback Danny Bradley and ball carriers like Spencer Tillman, Earl Johnson and Marcus Dupree, Ohio State followed the new gameplan that had been set in recent years against the Sooners, loaded up the box and slowed them down enough to secure a nationally televised 24-14 win.

A big part of that gameplan was built around the defensive line. The only real way to slow down Oklahom’s rushing attack was by eliminating any sort of a threat up the middle, forcing Bradley onto his second read on the option to the outside, where linebackers and defensive backs could try to make a play in open field. Oklahoma won a lot of games in the 1970s by dominating teams at the line of scrimmage and using that to create consistent yardage on the quick handoff to the fullback off of the traditional triple option look.

Oklahoma tried to do that here, and Ohio State had the answer. By loading up the defensive line with five players, Ohio State was able to cause problems for the OU line, specifically for pulling linemen, which the Sooners utilized a lot. When there are five defensive linemen to block on any play, it suddenly becomes a lot more difficult to pull an offensive lineman, because it either leaves a player completely unblocked, or forces a tight end to take on a defensive end. This one is the latter and the tight end actually does a solid job, but that’s not a reliable strategy in the long-term.

Neither is hoping to win five individual battles up fron on every single play, which you have to do against a five-man front. Oklahoma loses right in the middle of the line to Spencer Nelms as the left guard fails to pick up his block and Nelms is able to help wrap up Tillman for a short gain.

Because running to the inside required pretty much perfect blocking, Oklahoma went away from it as the primary way to attack the Buckeye defense pretty quickly. Running to the outside wasn’t Oklahoma’s strength, but it at least prevented a scrum in the box and forced Ohio State’s linebacker to move horizontally. Unfortunately for the Sooners, the Buckeye defense was ready for that too.

With so much on the line of scrimmage to stop the inside handoff, Ohio State was able to substitute size for speed at linebacker to better neutralize runs like this one. Linebacker Clark Backus did a great job here of trusting the big boys up front and getting to the perimeter quickly to help set the edge.

This was an issue for Oklahoma pretty much all game long. Because the inside game wasn’t consistently holding linebackers in the box, there was pretty much never any room to run to the outside. This time it’s Rowland Tatum on the outside to set the edge and make a play from the linebacker spot, but the guys actually coming up with these tackle on outside runs like this one were essentially interchangeable. Ohio State’s gameplan started with domination up front and made everything a whole lot easier for everyone behind that front five.

The rules were certainly more complex than this, but the basic approach was that the play side linebacker would set the edge on any run to the outside, because they knew the line would keep them clean. If you can do that, stopping the run is going to be very easy.

“The defense did an outstanding job,” head coach Earle Bruce said. “How many rushing yards did Oklahoma have?” The Sooners finished the day with 177 yards on the ground. “When you can do that to a team like Oklahoma, when you can do what we did today against Oklahoma, it’s a great victory. That was just overall the best game we’ve played since I’ve been at Ohio State.”

The five-man front worked well against the pass too, holding Bradley to just 9-of-21 passing for 170 yards. He struggled reading Ohio State’s zone-heavy backfield, which frequently provided enough time for the Buckeye defensive line to pressure him into either a scramble or a sack.

Oklahoma’s only success on the day came from a couple of explosive plays, but outside of that, there was very little in the way of consistency or efficiency from the Sooners, which was a far cry from what they had done to the Buckeyes six years prior, when they pulled off a 29-28 win thanks to some great offensive production. Oklahoma was down a bit by the time this game kicked off, but that doesn’t take away from a perfect Ohio State gameplan and nearly perfect execution that led to, at the time, a win over a top five opponent on the road. In the Bruce tenure, that win could easily be considered one of the most significant.