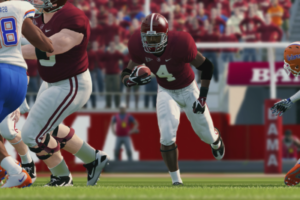 Welcome to day three of the Buckeye Sports Bulletin 64-team NCAA Football 14 simulation. With just 16 teams remaining, only the best of the best of the best are going to be able to survive and advance, as we rapidly near naming a [simulated] national champion. Last round, we saw plenty of exciting action.

Ohio State led the way, though not in the way it was hoping, with a late comeback victory over an upstart Kentucky team, 23-20. Staying in the Midwest, Iowa knocked off Minnesota in over to advance to a matchup with the Buckeyes today, while Michigan stomped its rival from East Lansing, and Penn State pulled off a comeback of its own to take care of Missouri.

In the South, LSU continued its dominance, as did UCF, setting up a very intriguing matchup there in the Sweet 16. Ole Miss kept the Cinderella dreams alive with a close win over Tulane, while Georgia made short work of Sam Ehlinger and Texas.

Out west, Alabama rolled Tennessee, Arizona State upset Oregon, Utah shut down USC and Oklahoma just managed to edge out Washington State, though it took Jalen Hurts and company an overtime period to pull away from the Cougars.

Finally, in the East, Clemson put together what may be the biggest beating in the tournament, dismantling North Carolina, 68-7. The Tigers will face Notre Dame for a spot in the Elite Eight today, while Florida and Wisconsin will square off for the last spot in the next round.

Note: For the full explanation of what this tournament is, how these seeds were selected and the schedule for when upcoming rounds will be released, click here for our introduction to the tournament.

The Buckeyes survive and advance to the Elite 8, thanks to the raw, unmitigated athleticism of their star quarterback. That’s right folks, led by a 12 carry, 85-yard performance by Chris Chugunov, Ohio State was able to eke out the win despite a first quarter concussion that ended Justin Fields’ day prematurely.

Now, Chugunov certainly wasn’t perfect, but he got the job done. After the injury, Ohio State essentially transitioned on the fly to a spread option team, with Chugunov throwing just 24 times on the day, many of the screens. He completed 15 of those passes for just 122 yards, though he did toss Ohio State’s only score of the day to Binjimen Victor.

Jokes aside, the true star of the game was the Buckeye defense. Tuf Borland, Marcus Hooker, Malik Harrison and DaVon Hamilton all had two tackles for loss, as the Hawkeyes were held to 327 yards of total offense, a good portion of which came on a late drive to cut the final deficit to just five after being completely shut down for much of the game.

Also starring for the Buckeyes was kicker Blake Haubeil, who led the team in points, knocking through all four of his field goal attempts, including one from 52 yards out.

With a 27-6 lead at the half, Michigan was never really threatened by Penn State, as the Wolverines advance to an enormous matchup with Ohio State in the Elite Eight.

For the Wolverines, the key to this game was just staying on track. Penn State quarterback Sean Clifford threw three interceptions and the Nittany Lions had little to no rushing attack, meaning they were entirely reliant on big plays in the passing game. Those plays were there occasionally, as shown by a 55-yard touchdown pass to Justin Shorter in the second half, but not frequently enough to hurt the UM defense.

On the other side, Michigan just played calm. Shea Patterson went 35-of-48 passing for 467 yards and three touchdowns, while Zach Charbonnet ran 24 times for 107 yards. Receiver Nico Collins was electric, catching eight passes for 236 yards and two touchdowns. Even the kicker, Quinn Nordin, got in on the action, hitting five of his six kicks.

Linebacker Jan Johnson was a bright spot for Penn State, as he recorded 15 tackles, including two for a loss. 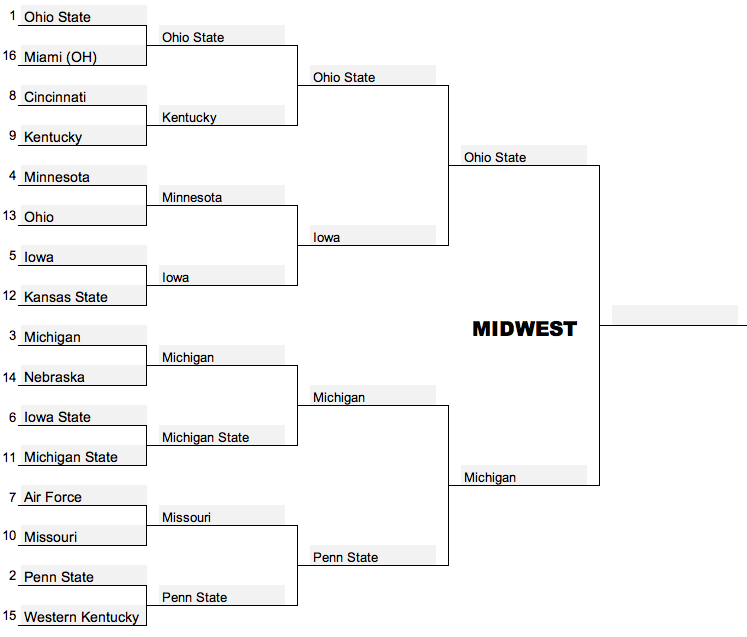 In the battle between two national champions, it was LSU who cruised through the game and advanced to the Elite Eight.

The Tigers held a 30-7 lead into the fourth quarter before the Golden Knights began to put it together on offense, but it was all just a consolation as LSU had the game under wraps. Joe Burrow has yet to put together a highlight-reel performance, throwing for just 221 yards, a touchdown and an interception. He also rushed for 46 yards in the game.

Clyde Edwards-Helaire ran 26 times for 111 yards and two touchdowns, again playing the heartbeat of the offense, but it was more UCF’s mistakes than LSU’s success that led to the win.

The Tigers jumped to a 17-0 lead on a pair of Dillon Gabriel interceptions, and, with UCF down just 20-7 and in the red zone, Gabriel threw another pick, ultimately sealing the game. Gabriel finished the game with 286 yards, a touchdown and four interceptions, the fourth of which was a pick-six late in the final quarter.

The Bulldogs advanced to the Elite Eight, but it was not easy, despite the seeding disparity between the two teams.

Ole Miss jumped out to a 13-10 lead early thanks to 112 first quarter rushing yards from Matt Corral, as well as a Jake Fromm interception. But the Bulldogs righted the ship, and 381 passing yards, four touchdowns and two interceptions from the Georgia quarterback was enough to lead his team to victory.

Tight end Charlie Woerner was Fromm’s favorite target in the game, with the duo connecting 14 times for 122 yards.

Ole Miss had a chance to come back after kicker Rodrigo Blankenship missed two field goals in the second half, including one from 39 yards, leaving the score differential at five points. But the Rebels had their drive end on a brutal fourth-down drop by Elijah Moore, and James Cook added a rushing touchdown for Georgia late to ice the game entirely.

Corral didn’t quite have the magic through the air that he did in his first two games, but still finished with 236 passing yards,152 rushing touchdowns and three total touchdowns with zero turnovers. Ole Miss linebacker Momo Sanogo also gave it his all, ending with 18 total tackles, two of which were for a loss, as well as an interception. 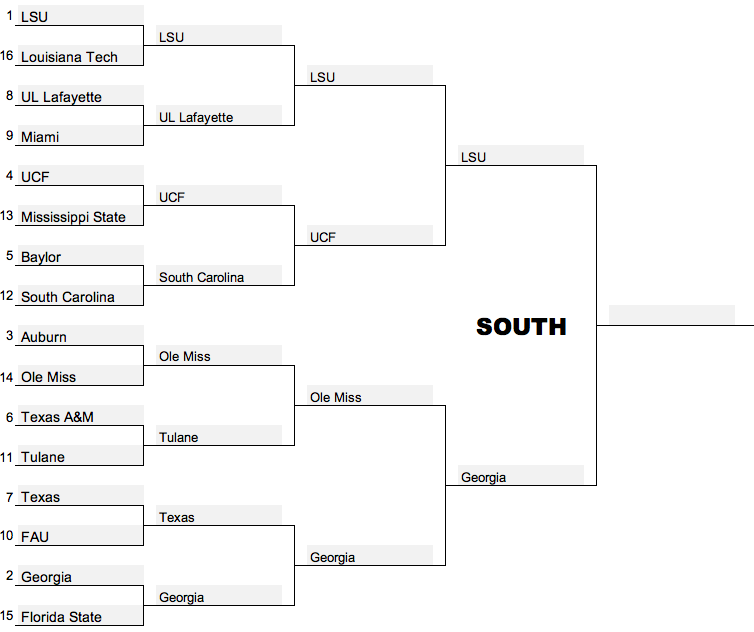 The Crimson Tide, sans-Tua Tagovailoa, are onto the Elite Eight after tearing through the upstart Sun Devils with ease.

ASU scored the first touchdown of the game on a 2-yard Jayden Daniels scamper and was held scoreless for the remainder of the afternoon, putting up just 140 yards in the air and 80 on the ground. The offensive struggles weren’t entirely new for ASU, who had advanced this far thanks to some great defense.

What was new was the defensive collapse as the game went on. After that first score, ASU allowed three Alabama field goals in the first quarter and a fourth in the second to make the score 12-7, but for the most part, the defense was stout. Field goals are quite a bit easier to swallow than touchdowns against a team that will get its points regardless.

A 4-yard touchdown run with four minutes to play in the first half seemed to break that defense’s back. With a 19-7 lead going into the half, Alabama rattled off two quick touchdowns to open the second half and just sat on the Sun Devils in the fourth quarter to secure the win.

Najee Harris led the Tide, carrying 33 times for 162 yards and a score.

It’s chalk in the West Elite 8, as Oklahoma did just enough to hold off Utah and advance to the next round, where they’ll face off with the top-seeded Crimson Tide.

This was a whole lot of fun. Utah’s defense showed up in a big way, holding Oklahoma to just nine points in the first half and – for the most part – slowing down Jalen Hurts, who went 33 of 42 for 296 yards and two touchdowns.

It wasn’t enough. The Ute offense never got going consistently enough to string together long drives, and there wasn’t the kind of explosive potential needed to make up for that. Oklahoma certainly wasn’t perfect, but it made a few more plays. In a game like this, that was enough. Against Alabama? It may not be. 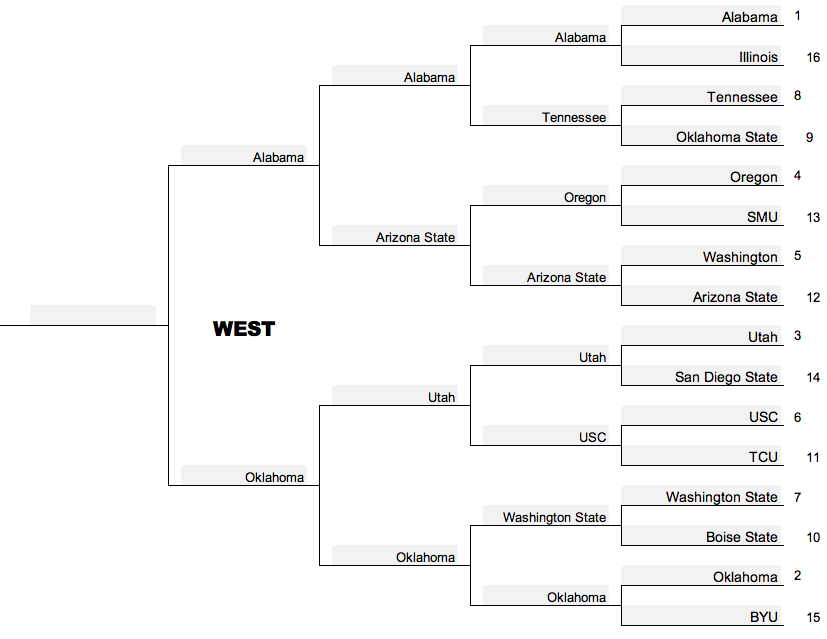 It took a last minute stand, but Clemson was able to hold on against a rowdy Notre Dame team to advance to the Elite Eight, meaning that all four one-seeds are through to the regional finals.

This one never had much separation, as the Tigers held a 29-20 lead at the end of the third quarter (the largest of the game) but squandered it quickly in the final frame on a 39-yard Notre Dame touchdown pass. Two Clemson field goals provided a cushion, but with two minutes to play, Ian Book and the Fighting Irish still had a real chance to drive down the field and tie the game.

They got to the Clemson 40-yard line, but a third down sack forced a fourth-and-15 hail mary that never had a chance, giving Clemson the ball back with just seconds left to play.

Trevor Lawrence had a bit of a down day, completing 25 of his 35 passes for 298 yards and an interception. He was helped out by a great showing from running back Travis Etienne (27 carries, 169 yards) and kicker B.T. Potter (7-of-8 kicking), as well as two big interceptions from his defense.

Book was solid, going 32-of-51 passing for 307 yards and a touchdown, though he did have the two interceptions. Halfback Tony Jones Jr. rushed for 83 yards and a score on 17 attempts.

Despite being a matchup between two of the best defenses in the entire tournament, this game got very pointsy, very quickly. Florida led 31-20 at the half after two Kyle Trask touchdowns, an Emory Jones run and a 54-yard C.J. Henderson pick six. Jack Coan scored three times to keep things close, but he couldn’t maintain it in the second half.

There, Florida rattled off two quick scores to take a 45-20 lead, and while a 75-yard strike to Quintez Cephus closed the gap, this game was over entering the fourth quarter, as Florida advances to the Elite Eight.

For the Badgers, it was a case of Coan just trying to do too much. He went 27 of 54 for 447 yards and three scores, but his four interceptions were crippling against a Florida offense that was firing on all cylinders. Jonathan Taylor carried the ball just 16 times for 73 yards. 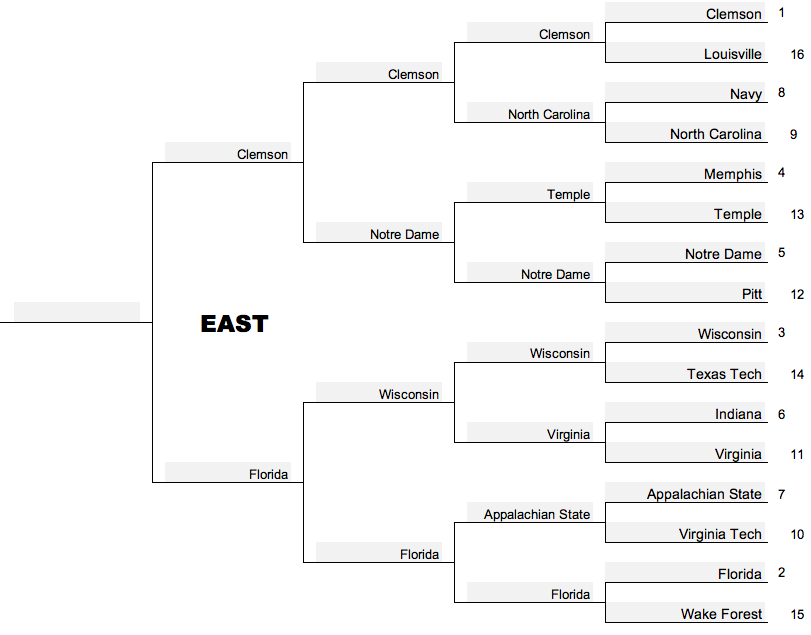