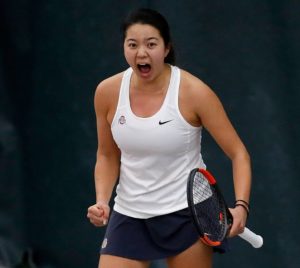 Shiori Fukuda, a fourth-year junior on the No. 25 Ohio State women’s tennis team was named Big Ten Athlete of the Week for her performance at the Michigan Invite.

Fukuda is the No. 11 women’s tennis student-athlete in the country and has carried her momentum over from her first professional championship at the 15K Vitro ITF Gimcheon Tournament in Gimcheon, Korea in June.

Suprisingly, this is the first Big Ten weekly honor for Fukuda, who is a two-time unanimous First Team All-Big Ten selection and was the 2018 Big Ten Freshman of the Year.

This season Fukuda leads Ohio State with a 15-4 singles record as well as a 7-4 ledger in doubles play.

The Buckeyes next take the courts for ITA Kickoff Weekend in Stillwater, Okla., to open dual match play, where they will take on No. 24 Wake Forest at 4 p.m. ET Saturday, Jan. 25.

Host No. 10 Oklahoma State faces San Diego in the first match of the day, then the championship match is set for 3 p.m. ET Sunday, Jan. 26, preceded by the consolation match at noon ET. Whoever wins the event will earn a spot in the ITA National Team Indoor Championship.