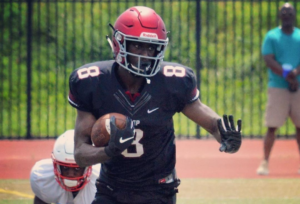 O-H-I-O STATE fans are familiar with this guy.

The son of the NFL Hall of Fame wide receiver of the same name, Harrison currently ranks as the No. 21 wide receiver and No. 115 player overall in the 2021 class. Despite being listed as 6-3, 190 by 247Sports, Harrison recently tweeted some updated numbers that show him at nearly 6-5 and 203 pounds.

“Great frame with length but needs to add strength. Big, strong hands. Can eventually get to 220 pounds,” Dohn wrote. “Great route tactician. Gets out of breaks quickly and is precise in his route depths. Good release and technical at top of routes. Has separation skills. Uses size and length well to shield defenders. Red-zone threat. Catches every routine ball and tracks it well. So smooth he makes it look effortless.”

Harrison joins a big crew of Buckeye commits in the All-American Bowl, including his teammate at St. Joseph’s Prep, five-star quarterback Kyle McCord, the No. 3 pro-style quarterback in the 2021 class.