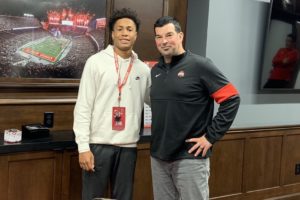 As first reported on Monday afternoon by 247Sports director of recruiting Steve Wiltfong, Ohio State four-star cornerback commit Jordan Hancock will not play his senior season at Suwanee (Ga.) North Gwinnett because both of his parents have underlying health conditions and he wants to limit potential interaction with other people amid the coronavirus pandemic.

Thank You For Everything North Gwinnett ❤️ pic.twitter.com/xIeqrzjYW2

The 6-1, 170-pound Hancock – who is considered the fifth-best cornerback and No. 76 prospect overall in the class of 2021 – committed to the Buckeyes on July 19, just five days after he decommitted from Clemson. He initially picked the Tigers in March because of the program’s focus on faith and proximity to his hometown, where his mother was undergoing radiation treatments for cancer that she has since completed.

Hancock has informed Ohio State head coach Ryan Day of his decision, and he’ll now join Hopewell, Va., five-star running back TreVeyon Henderson in sitting out his senior year – albeit for different reasons after Virginia moved its season to the spring. Both plan to cap their high school careers in the 2021 All-American Bowl before enrolling in classes in January.