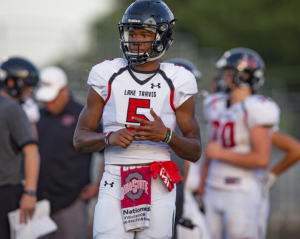 Despite the drag of uncertainty from the Ohio State independent board’s investigation into head football coach Urban Meyer, who has been on paid administrative leave since Aug. 1, the Buckeyes have been able to keep all of their commitments secured across the 2019 and 2020 recruiting classes.

While the university continues its investigation into how Meyer handled allegations of former wide receivers coach and recruiting coordinator Zach Smith‘s past domestic violence, fall camp goes on Tuesday for OSU as the team enters its 10th practice under acting head coach Ryan Day.

On the trail, recruiting also never stops. As Ohio State’s prospects anxiously await an update on Meyer, whose investigation expects to end by Aug. 19, one pledge expressed confidence in how things will pan out.

In an interview Monday with CBS Austin, Texas, Lake Travis five-star wide receiver commitment Garrett Wilson opened up on the situation in Columbus with an optimistic outlook for the Buckeyes in 2018.

“Talking to my mom (Sunday), I’m like, ‘I don’t know why stuff like this has got to happen,'” Wilson said. “She’s like, ‘Welcome to life.’ So somethings go wrong, not everything’s going to go right.

Originally from Columbus, Wilson was last on campus for an official visit the weekend of April 13-15 when the Buckeyes held their spring game April 14. From the same high school as OSU freshman quarterback Matthew Baldwin, Wilson hopes to lead Lake Travis to new heights after the Cavaliers fell short with a 35-33 loss to Allen, Texas, in the state championship game.

“I’m trying to do whatever I’ve got to do to help my team win a state championship,” Wilson said. “If that means catching zero passes or 150, whatever it takes.”

“Usually, when you’ve got to wake up at 5:30 in the morning, you’re dreading through,” Wilson said. “I’ll wake up, I’m smiling, ready to play some football.”