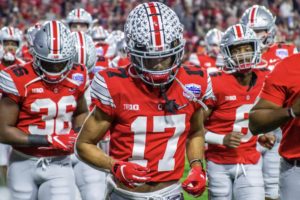 How Much Easier, Or Harder, Did Ohio State’s Schedule Get With Conference-Only Slate?

The Big Ten announced its 10-game, conference-only schedule on Wednesday, and with it Ohio State officially lost games against Bowling Green, Oregon and Buffalo while gaining a matchup against Purdue.

With the changes, Ohio State’s schedule got easier, or did it? And if so, just how much easier? Here are some numbers that can help answer those questions:

Here is a look at each version of Ohio State’s schedule, with the current schedule on the right, and with each opponent’s record from last season in parentheses:

Looking at the full schedule, the old 12-game slate has opponents with a combined 84-69 record (54.9 percent), slightly higher than the new 65-61 record (51.6 win percentage) that the conference-only opponents hold.

But with nine of the games – Illinois, Indiana, Iowa, Maryland, Michigan, Michigan State, Nebraska, Rutgers and Penn State – being the same on both schedules, the combined 61-53 record (53.5 percent) can be taken out of the equation.

That leaves a 23-16 record (59.0 percent) from the previous nonconference schedule compared to the 4-8 record (33.3 percent) added with the inclusion of Purdue.

This comparison is unfair for a few reasons, one being that it makes the matchup against Buffalo seem much more difficult than the game against the Boilermakers which, likely, is not true. The Bulls have success in the MAC, but the winner of the MAC in 2019 lost to Ohio State by 71 points, so that doesn’t necessarily mean much.

On the other hand, Purdue struggled with injuries throughout last season, and will likely come back much stronger in this year’s campaign than its 4-8 record suggests.

Three out of the last four of Ohio State’s regular season losses have come away from Ohio Stadium, so home-field advantage can be quite important.

Ohio State was forced to drop from seven home games to five, while keeping five away matchups with this new schedule, but even with only half the games being played in Ohio Stadium, the conference-only schedule might be more favorable for travel.

Previously, the Buckeyes had a pair of back-to-back road game sections, first against Michigan State and Penn State, then followed three weeks later by a pair against Maryland and Illinois before playing Michigan at home. Now, there is just one back-to-back road game section, with Maryland and Penn State both being away matchups, followed by an off week.

The addition of Purdue on the road will bring back some memories of Ohio State’s last trip to West Lafayette, which ended in a 49-20 rout in favor of the Boilermakers. But, trap game or not, a road game to Purdue is more favorable than a cross-country trip to Eugene to face Oregon, who currently sits in the top 10 in the Amway Coaches Poll.

In general, the home/away dynamic may not matter much with the potential of no fans in the stands, but even in sold-out stadiums, the new schedule is pretty favorable to the Buckeyes.

Here are the schedules with each team’s Football Power Index rankings on the right. This ranking, done by ESPN, may not be perfect, but it ranks every FBS team from best (1) to worst (130), and gives a reasonable gauge to how difficult Ohio State’s opponents may be.

Ohio State, who ranks second in FPI, has the same amount of top 50 opponents (six) in both schedules, but Purdue, ranked No. 47, is not quite eighth-ranked Oregon.

Still, the Buckeyes do lose matchups against two of the four teams previously on the schedule that rank in the bottom half of FPI and only have four games against teams ranked outside the top 50.

Even with a condensed schedule, though, Ohio State avoids playing any of its four matchups with top 25 opponents in back-to-back weeks, getting closest when playing No. 19 Michigan, No. 79 Maryland, No. 7 Penn State, having an off week, then playing No. 22 Iowa in a five-week stretch.

There is no specific spot on Ohio State’s current conference-only schedule that is especially difficult, as was the case with its previous schedule. The difference now is that this time, the Buckeyes avoid one of the toughest nonconference matchups that any top program had in the country.