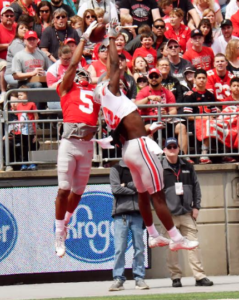 After he set his feet at the 24-yard line, Baldwin immediately looked right for Wilson, letting a fade fly with three seconds of hang time down the right sideline and into the corner of the end zone.

Despite sophomore cornerback Sevyn Banks (6-1, 200) in coverage, Wilson (6-0, 188) went up for the jump ball at its highest point — mere inches above — before coming down with both feet inbounds and staying upright all the way through the catch.

As the referees signaled touchdown, the first passing score of the afternoon, Wilson waved on cheers from fans spread throughout the southwest corner of the Horseshoe while Banks punched the turf in frustration.

“That one today was pretty sweet,” said fifth-year senior C.J. Saunders. “I can’t wait to watch that on film or on TV. He’s just a guy who can go up and control his body like one of the best I’ve ever seen.

“He’s made a couple one-hand, ridiculous plays. But his ability to go up over a DB — that’s something he does much better than me. I like being able to watch him do that in practice and games.”

In three short months since he stepped foot on campus as an early enrollee, Wilson has shown more than just signs of immediate-impact ability for the Buckeyes’ offense.

“When you turn on the tape, he’s a guy that, when the ball goes his way, the completion percentage is really high,” Saunders said. “And as a receiver, that’s huge. And whether it’s a spectacular catch or a wide-open catch, just building that trust with quarterbacks, he’s going to be able to do that this fall.

“And not only the quarterbacks, but the teammates and coaches — we know that, when you throw it up to him, there’s a good chance that he’s coming down with it. So yeah, he’s really impressed me and I’m thankful that he’s my teammate.”

As the highest-rated recruit in OSU’s 2019 class — the 247Sports composite’s No. 20 overall prospect, No. 2 wide receiver and No. 3 player from Texas — Wilson was considered an instant competitor for playing time after position coach Brian Hartline saw three top playmakers graduate.

“My best compliment to him, I told him, ‘You don’t act like a freshman,’” Hartline said. “When he first got in, he’ll tell you, it was kind of a culture change. The kid should still be in high school. He’s just doing a phenomenal job, whether I’m throwing him at ‘Z’ at ‘X’ — his mental retention’s really good. He really wants to learn from the guys. He’s buying into the culture. So everything he’s doing right now is on the right track and I’m excited for him to continue to take small steps.”

After he worked with the first-team offense during an April 5 scrimmage and had his black stripe removed following an April 8 practice, Wilson’s spring game performance — four receptions for 44 yards and the 18-yard touchdown — put the exclamation mark on a successful camp debut.

“I’ve seen a lot of growth from Garrett (from) the day he walked in, in the offseason — (winter) training to spring football,” said fifth-year senior K.J. Hill. “I feel like the main thing he developed as is, as a person, he’s growing up already from a little boy to a man, and I feel like that’s why he’s making those plays. So he’s humble, he’s soaking up everything he can, he’s learning — that’s all he wants to do is learn — and he’s coachable.”