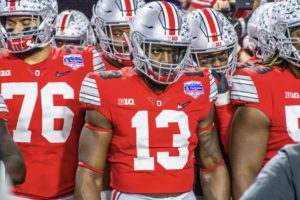 Congrats @Shoddieslime_13 – Tremendous Talent & Proud Graduate of @OhioState – Skills for Both Sides of the Ball. Excited for Your Future in the NFL – Go @Patriots pic.twitter.com/bjc5LX6w8t

Berry and three of his former teammates signed free-agent deals after going undrafted, including Branden Bowen, Alex Mack and Binjimen Victor, while Robert Landers is also in the mix for an NFL contract.

After entering Ohio State as the No. 728 overall prospect and No. 35 weakside defensive end in the 2015 class, Berry blossomed into a four-year contributor, including his three final seasons at tight end.

As a fifth-year senior, Berry played both ways against Maryland and Rutgers, becoming the first Ohio State player to line up on both offense and defense in a game since Zach Boren played both fullback and linebacker against Indiana in 2012.

The Lorain native only caught two passes for 20 yards in 2019, but he thrived as a run blocker, which was evident in the Buckeyes’ 34-10 trouncing of Michigan State.

The versatile Berry totaled 17 catches for 198 yards and four touchdowns across three seasons as a tight end, but his impact went well beyond his production.

With the Buckeyes down 26-14 at Penn State in 2018, Berry showcased his versatility and his relentless effort by blocking both a Penn State pass rusher and a defensive back downfield on Victor’s 47-yard score.

A product of Lorain High School, Berry caught nine passes for 78 yards and two touchdowns as a fourth-year junior for the 13-1 Buckeyes in 2018.

Berry snagged three catches for 57 yards and one score, where he looked the part of an NFL tight end, against the Rebels.

As a backup among a loaded defensive line in 2016, Berry made seven tackles (four solo) in 10 games. He played end behind a litany of eventual NFL D-ends in Nick Bosa, Jalyn Holmes, Sam Hubbard, and Tyquan Lewis.

At 6-foot-4 and 255 pounds, with the athleticism of a professional basketball player, Berry ‘s NFL prospects might have been hurt by the cancellations of pro day and other opportunities to display his skillset as much as anyone.