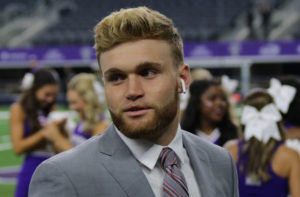 The former Ohio State quarterback, who had transferred to Miami (FL) prior to the 2019 season, will opt out of the 2020 football season, per the Miami Herald.

Martell’s fourth-year junior campaign began with him serving a one-game suspension in the Hurricanes’ opener against Alabama-Birmingham for unspecified reasons.

In his lone season at Miami, Martell completed his only pass attempt for seven yards and took one rush for three yards, while serving as a backup signal caller as a third-year sophomore.

This fall, Martell was not listed on Miami’s depth chart at quarterback, with backups N’Kosi Perry and freshman Tyler Van Dyke behind starter D’Eriq King.

Initially, Martell came to Columbus as a highly touted recruit out of Las Vegas Bishop Gorman, where he was the 2016 Gatorade National Player of the Year. In his award-winning senior season,  Martell threw for 2,362 yards and 41 touchdowns and added 1,257 rushing yards and 21 touchdowns.

Altogether, the former Netflix star on “QB1: Beyond the Lights,” passed for 7,507 yards and 113 touchdowns to just nine interceptions, along with 2,294 rushing yards and 35 touchdowns while leading Bishop Gorman to three state championships in his three seasons as starter.

After committing to Ohio State as the No. 2 dual-threat quarterback in the country, Martell was a reserve behind record-breaking starter J.T. Barrett and backups Dwyane Haskins and Joe Burrow.

As a redshirt freshman in 2018, Martell was the second-string quarterback behind Haskins, who was a Heisman Trophy finalist.

Many expected Martell to take over as the Buckeyes’ starter as a third-year sophomore in 2019, but former five-star quarterback Justin Fields transferred in from Georgia and usurped his spot.

As a member of the Buckeyes, Martell completed 23 of 28 passes for 269 yards and one touchdown, adding 128 yards and two touchdowns on 22 carries. Martell’s 10-for-10 performance against Rutgers will forever seal his spot in the Ohio State record books for the highest completion percentage in a game.

Following the addition of Fields, Martell decided to transfer to Miami, which was expected to be a massive addition for the Hurricanes. However, Martell struggled from the jump under head coach Manny Diaz, eventually losing out on the starting job to Jarren Williams and Perry.

A major part of Martell’s troubles in Miami  came from off-the-field issues, causing him to miss three games during separate leaves of absences last year. .

Martell’s struggles to find his footing with the Hurricanes since his transfer to Miami were documented by Buckeye Sports Bulletin in an interview with Gary Ferman of CaneSport.com.

“It hasn’t gone very well,” Ferman said in December of 2019. “He got beat out by the two quarterbacks that were here. He couldn’t win the starting job and hasn’t really played. He played around with being a receiver for a few days, that didn’t work out. He hasn’t really played and has been having personal issues. He’s away from the team right now dealing with personal issues.

“The only good thing about his coming to Miami is he likes it at Miami and he’s got a freaking drop-dead gorgeous Brazilian swimsuit model as a girlfriend.”