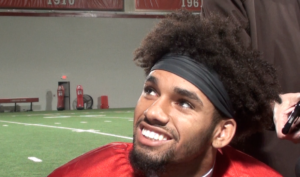 When the Ohio State offense lost wide receiver Austin Mack indefinitely, undergoing foot surgery after the 49-20 loss Oct. 20 at Purdue, the Buckeyes reshuffled their deep rotation as they looked for others to step up.

Among the options, Chris Olave — the former four-star recruit as the 247Sports composite’s No. 399 overall prospect, No. 68 wide receiver and No. 47 player in California for the 2018 class — emerged as OSU’s dark horse ahead of Nov. 3 against Nebraska and built confidence from there.

The 6-1, 175-pounder from San Marcos (Calif.) Mission Hills played big down the stretch with 12 receptions for 197 yards (16.4 average) with a long of 29 and three touchdowns to cap a 14-game freshman season where he snowballed momentum into his sophomore campaign.

“My guys, they trust in me — Coach Hartline, Coach Kee, Terry, (Binjimen Victor), all the receivers — but I just wanted to make an impact in the game and do whatever I can,” Olave said.

Olave emerged on special teams, particularly on punt return, where he flashed his attention to detail and 100-percent effort as a gunner — who could forget Olave’s pivotal punt block that led to a momentum-swinging touchdown return Nov. 24 in the third quarter of Ohio State’s eventual 62-39 win over Michigan?

More importantly, as he showed with his two receiving touchdowns for 48 yards in the Buckeyes’ upset of the Wolverines, Olave’s development spiked when a struggling offense needed a spark most.

“Early on, I was kind of trying to make an impact on special teams,” Olave said. “And then, like I said earlier, Mack went down. To step into that role, it has been a blessing.”

Olave continued his momentum from the U-M rout the subsequent week in the Big Ten Championship Game with a career-high five receptions for 79 yards, including a 29-yard touchdown, en route to Ohio State’s 45-24 victory against Northwestern.

“(The other receivers) gave me a lot of lessons,” Olave said. “They teach me a lot till this day. At practice, I still ask them a lot of questions and just little things that try and get me better every day.”

Olave came to Columbus from outside of San Diego when he chose the Buckeyes over UCLA, USC and Utah in his final four Jan. 28, 2018, and signed 10 days later. Head coach Ryan Day, then OSU’s first-year co-offensive coordinator/quarterbacks coach, identified Olave last fall after originally going to Mission Hills and checking on 2018 four-star quarterback Jack Tuttle.

Ohio State reloads at wide receiver in 2019 after McLaurin graduates with Johnnie Dixon and Parris Campbell. Among the returners, including Mack and Victor, Olave’s late-fall arrival puts him in front of his underclassmen peers as he looks to take the next step and become a starter.

“Coming into Ohio State, I knew all of the receivers were coming back,” Olave said. “So I just wanted to come in, get better, compete and try to get on the field — special teams or something.

“Ahead of the schedule, I just came in trying to learn the plays and try to get everything down and just work hard every day, try to earn a spot.”