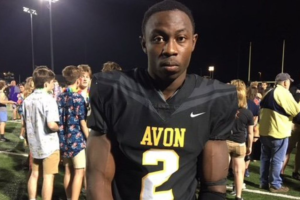 Avon, Ind., four-star running back Sampson James has departed from Ohio State’s 2019 recruiting class with interest in Indiana, as Kyle Neddenriep of The Indianapolis Star first reported Sunday, after he made his latest unofficial visit to campus Saturday for the Buckeyes’ 49-26 win over the Hoosiers.

In the afternoon, he took to Twitter and announced his commitment to IU.

The 6-1, 211-pounder originally became the OSU’s third pledge for the current cycle when he announced his March 19 commitment after an unofficial visit over the weekend of March 17-18. James joined Huntington (W.Va.) Spring Valley four-star offensive guard Doug Nester and Mentor, Ohio, four-star offensive tackle Ryan Jacoby at the time as Ohio State started to build its class in the spring.

The Buckeyes’ 2019 recruiting class decreases to 14 members. Roswell (Ga.) Blessed Trinity Catholic four-star Steele Chambers (6-2, 215) — the 247Sports composite’s No. 250 overall prospect, No. 9 athlete and No. 29 player in Georgia — becomes OSU’s only commitment at running back. He announced his pledge April 18.

As the 247Sports composite’s No. 163 overall prospect, No. 8 running back and No. 3 player in Indiana, James boosts the Hoosiers’ 2019 recruiting class to 16 members. His commitment gives IU its top-rated prospect and second running back as he joins Hayti, Mo., three-star Ivory Winters (5-11, 206).

Eight games into his senior season at Avon (6-2), James has taken 73 carries for 1,011 yards and 10 touchdowns. Out of the backfield, he has added seven receptions for 32 yards and a touchdown.