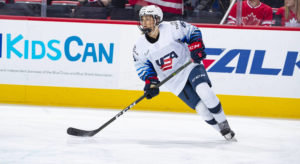 “I am honored to be joining the women’s hockey program at Ohio State,” Hickel said. “The standard of excellence Coach Muzerall has established, along with the commitment from her staff and the student-athletes, has proven that the Buckeyes will continue to be leaders in the women’s game.

“I am at a perfect place in my life to use the experience and cultures I’ve absorbed over the years of elite play, coaching and world travel to give that back to our team and to embrace the opportunity to help make a difference in this next generation.”

Playing at Western Collegiate Hockey Association (WCHA) rival Minnesota Duluth, Hickel thrived as a two-time captain for the Bulldogs. She led Duluth in scoring in 2014-15 and was also named a finalist for the Hockey Humanitarian Award.

“When hiring a coach, you need to look at the complete package,” Ohio State head coach Nadine Muzerall said. “Yes the Xs and Os matter, but they only consume a small fraction of the everyday coaching of these young women.

“We are developing them to be strong-minded women for life after hockey. There was no one better for this then Zoe Hickel. Her résumé speaks for itself in terms of experience playing in the top league in women’s college hockey [WCHA], numerous years professionally after and representing her country’s colors on the U.S. National Team.

“She possesses the technical and tactical coaching but what you can’t read are the qualifications she owns that match our culture and what we are as Buckeyes.”

After a standout career in Duluth, Hickel played professionally for the Boston Pride of the Nations Women’s Hockey League (NWHL). She was an all-star in both of her seasons in the NWHL and won the 2016 NWHL Isobel Cup Championship.

While beginning her pro career, Hickel also played for the U.S. Women’s National Team and coached at Merrimack College in its inaugural season in Division I. Hickel won a pair of World Championships and four Nations Cup titles for Team USA.

Following two seasons in the NWHL, Hickel moved to the Canadian Women’s Hockey League (CWHL). The Anchorage, Alaska native played for the Kunlin Red Star based in China in 2017-18 and the Calgary Inferno for the 2018-19 campaign.

In Hickel’s last season in the CWHL, she was an all-star and won the first star as player of the game in the Clarkson Cup Championship. Her plus-minus ranked third in the league, which included 17 Olympic players.

She then transitioned to the Swedish Women’s Hockey League (SDHL), playing for Linköping HC. Hickel continued her scoring ways, leading the squad in points. Continuing to spend time coaching throughout her playing career, Hickel also served as the strength coach and ran on-ice skill sessions for senior- and junior-level teams.

“Not only was she a great player but she is kind-hearted, family-centered, determined to win and committed to developing and growing the women’s game while educating and serving as a role model for the next generation,” Muzerall said. “We are proud to welcome her into our family and call her a Buckeye.”