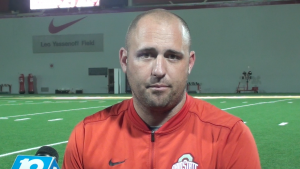 Smith was fired from his position at Ohio State in July following allegations of domestic violence against Courtney. The situation led to an investigation that resulted in a three-game suspension for head coach Urban Meyer and a three-week suspension for athletic director Gene Smith.

Smith is the grandson of former Ohio State head coach Earle Bruce, who passed away in April.