Zach Harrison Aiming To Leave A Legacy At Ohio State 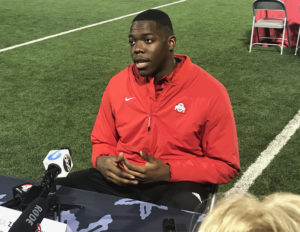 Zach Harrison could have ended up at Michigan. He could’ve picked Penn State, too. Or Alabama – or any program in the nation, really.

As a five-star recruit and the country’s No. 12 overall prospect, the defensive end didn’t choose any of those national options, though. Instead, the Lewis Center (Ohio) Olentangy Orange product picked Ohio State – the hometown school – and now he’s aiming to leave a legacy in Columbus.

That was the goal he brought up when asked about his freshman year – a season that should see him in the rotation, but he’s unlikely to be a feature player with returning starters Chase Young and Jonathon Cooper leading the way ahead of rotation ends Tyreke Smith and Tyler Friday.

“I really haven’t thought about this season that much,” Harrison said. “I just want to work and whatever happens, happens.”

But Harrison has thought about his career as a whole and what he wants to leave behind in Columbus whenever he departs – whether that’s three, four or five years from now.

“When it’s all said and done I want to leave a legacy here,” he said. “I want people to be like, ‘Oh, Zach Harrison was one of the greatest to come through Ohio State.’ That’s going to mean a lot more to me because coming from home, I’ll be able to take my kids here and grow up in the community where they know my name.”

During the recruiting process, it was far from a guarantee that Harrison would stay home. In fact he was thought to be a Michigan lean for much of the past year.

In the end, though, he opted to stick in Columbus, giving him a chance to leave behind that legacy.

“It was a bunch of factors,” Harrison said when asked about choosing Ohio State. “It was close to home and my parents and friends could come to all my games. The tradition of greatness at Ohio State. I wanted to be great when it’s all said and done and greatness is linked with Ohio State. If I put in the work, I’ll come out and be great.”