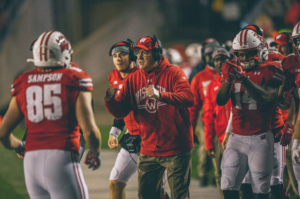 Wisconsin head coach Paul Chryst discussed the Badgers’ second matchup against Ohio State coming on Saturday in the Big Ten Championship, and also talked about how both teams have changed since the previous matchup, which was a 38-7 victory for the Buckeyes in Ohio Stadium.

Chryst on how much Ohio State head coach Ryan Day and the rest of the coaching staff have made an impact for the Buckeyes:

“Well I’ve got a lot of respect for the job that they’ve done, and just because you’ve got talent, doesn’t mean it’s going to happen, and I think what they’ve, and you see it in each game, I think what they do schematically, the adjustments you see them make, I think getting players to play at a high level, and doing it consistently. You know, there’s a lot of really good going on, I think it does get overshadowed, and there’s no question that they’ve got very talented players, but talent and players that play good football and execute all the things that, when you talk about ‘What is good football?,’ they’re doing it. They’re a smart team, and adjust, so I think what that whole coaching staff has done is every bit as impressive. It takes both, and I think they’re also, you can see that good coaching can hand it over to the players, and then they can play the game, and I have a lot of respect and think that they’ve done a heck of a job.”

Chryst on how Ohio State’s secondary and defensive line allow each other to shine on the defense:

“They compliment each other. I think if you go back and look at the number of pressures or quarterback hits or sacks, there’s no doubt that they’re generating it up front, whether it’s the defensive linemen or linebackers, you get some secondary, but I think you also see some of it because there’s not a place to go with the ball, and so it gives you that extra bit of time, and so I think that’s where they’re playing really good defense, you know because I think they compliment each other. There’s no doubt we didn’t do a great job in the passing game, certainly consistently, and you have to give credit to the whole defense for what caused that I think, and that’s certainly going to be something that we have to, every week you focus on it, but if we’re going to have success, we have to do a better job of protecting and getting open and, all in all, have to be better.”

Chryst on how both Wisconsin and Ohio State have changed since the previous meeting:

“I think we are a better team, I think you can make an argument they’re a better team as well, and the one thing that I do feel good about through this past month is we’ve had guys continuing to step up. Some are new names that are contributing and helping, and some are names that had been playing, but I think are playing at a better level, and so I think you can learn from that specific game, but more importantly, I think you can learn from who you were and what you did all season long to give yourself the best chance, the best plan, and then you get to go out and play the game, and that’s what it’s going to come down to.”

Chryst on Ohio State’s offense, and particularly, how J.K. Dobbins was able to have so much success in the 31-point win.

“He’s a really good running back. I think you’re seeing the two best running backs in the league in this game, and I think what makes them so good offensively is that they have a number of different ways that they can attack you, and we’re talking about in the throwing game, we’re talking about in the run game, and you have more than one run option.
“They have very good players, but they’re running a heck of a scheme, so they’re doing that, and they each make each other better.”