Wisconsin Chancellor Rebecca Blank: ‘We’re All Going To Move Together In The Big Ten’ 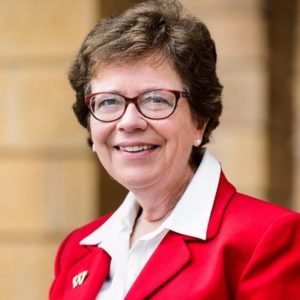 Following reports that the Big Ten presidents and chancellors were meeting to discuss the possibility of reinstating the fall football season, the conference’s coaches, players and fans anxiously await a decision.

Wisconsin Chancellor Rebecca Blank spoke about the upcoming decision during a news conference, and she was questioned about the possibility of football being played in the Big Ten in the fall of 2020 and the initial move to postpone the season.

The Big Ten’s return-to-play committee suggested a possible start date of Oct. 17 over the weekend. In August, the conference’s presidents and chancellors voted 11-3 to not play due to COVID-19 concerns.

“There are a variety of things that have changes since we last made that decision … the council of presidents met Sunday night [Sept. 13]. We had a very good discussion. We’re continuing to look at those proposals. I’m not going to say anything more about it at this point.

Blank clearly coming out and saying Big Ten will “move together” and that it “isn’t going to be a school-by-school thing” directly refutes reports from national radio host Dan Patrick, who said the vote will be “contentious.”

The return-to-competition committee holds importance in an Oct. 17 start date because it would allow Big Ten teams to play eight or nine games and then still hold a conference title game Dec. 19. The committee wants teams from the conference to still be considered for the College Football Playoff, which will have its field revealed Dec. 20.