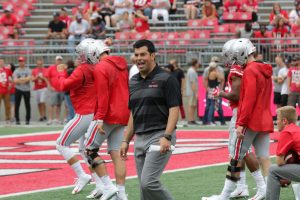 On offense and defense, good and bad, Ohio State revealed plenty Saturday at Ohio Stadium throughout its 77-31 rout of Oregon State.

As expected, the No. 5 Buckeyes (1-0) ultimately proved too much for the Beavers (0-1). However, several observations stood out in the season opener.

Among them, which were the biggest? BSB takes a closer look.