What We Learned From Ohio State’s Close Call at Maryland 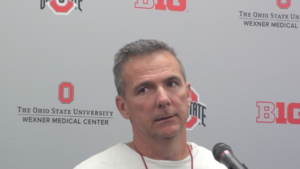 COLLEGE PARK, Md. – Ohio State survived an unnecessarily close game against Maryland on Saturday afternoon to move to 10-1 on the year, but there was more negative than positive to take away from the 52-51 win.

The Buckeyes were gashed on defense and offensively, nearly let three careless turnovers cost them the game. There was plenty to take from the shootout in College Park and what follows are our five main takeaways from the OSU win.

After a week in which the Buckeyes surrendered just six points to Michigan State, many thought Ohio State had figured something out on defense.

Those people were wrong.

Ohio State’s allowed Maryland, playing with its backup quarterback, to accumulate 535 yards of offense, 339 of which came on the ground. The Buckeyes refused to make any kind of adjustments in the first half, as the Terps routinely ran the same play, a weak side run away from an unbalanced formation, and Ohio State didn’t make an adjustment until after halftime. By that point in the game, running back Anthony McFarland had rushed for more than 200 yards, breaking numerous Maryland rushing records.

At this point in the year, Ohio State isn’t going to get much better. They are what they are, and Michigan has more talented weapons on offense than Maryland. The Buckeyes need to make an overhaul on their defensive staff during the offseason but for now, it might have to rely on its offense to win shootouts as the season winds down.

2. J.K. Dobbins Can Shoulder The Load

With Mike Weber sidelined with a quad injury, J.K. Dobbins was asked to carry the bulk of the offensive rushing load and he answered the call in a big way.

He carried a career-high 37 times for 203 yards and a score, proving that he can be Ohio State’s workhorse if needed. A week ago, it was Weber who was the guy who got the yards, but Dobbins is more than capable of doing much of the same.

With the kind of game Dobbins had, it will be curious to see how much Weber plays against Michigan, especially considering he was once committed to the Wolverines.

3. Haskins Can Run if Needed

For weeks, Ohio State fans have been clamoring for Haskins to tuck the ball and run and for the first time this season, he looked aggressive and determined when he tucked the ball under and ran.

Haskins finished with 59 yards on the ground and was particularly effective near the goal line, plunging in three times for touchdowns. In less surprising news, he added 405 yards and three touchdowns through the air against the Terps, putting together perhaps his more productive game as a Buckeye.

If nothing else, the idea that Haskins can run if needed should keep Michigan’s aggressive defense at bay in their preparation for Ohio State’s zone read, something that could be ciritcal in a week.

4. Playoffs Out of Reach

Ohio State is not a playoff team. Point, blank, period.

The committee has said multiple times that Ohio State has not passed the eye test in recent weeks and against Maryland, the Buckeyes failed again.

The defense has been morbid against offenses with a pulse, and a 26-6 win over Michigan State last week lost its luster after the Spartans again were held to six points in a 9-6 loss to Nebraska on the road. While Ohio State’s offense has proven to be electric, it has shown all year that it is not consistent enough to win games against competent opponents.

Even if Ohio State is able to pull the upset, and yes it will be an upset if the Buckeyes win, this team wont make the playoff unless there is chaos like there was in 2007. This is not even close to being a top-four team in the country and a Rose Bowl appearance seems much more likely at this point than anything else.

For years, it seemed as though the coaching staff didn’t trust tight end Rashod Berry on the field in critical moments. However, facing a fourth-and-1 in the overtime period, Urban Meyer elected to go for it, and Ryan Day dialed up a play for Berry, who caught a short pass and rumbled for 11 yards and a first down.

Berry had been the player Ohio State took off the field in such moments in the past and for him to be the player they go to in that situation speaks volumes to how far he has come in his maturity and development.