What We Learned: Buckeyes Step Up In B1G Comeback As Ohio State Survives Penn State 27-26 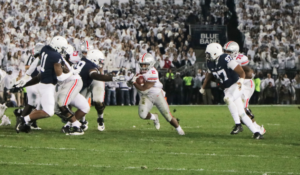 UNIVERSITY PARK, Pa. — Ohio State needed to squeeze every last ounce of effort it had to mount a 27-26 comeback with 13 unanswered points in the final seven minutes as the No. 4 Buckeyes (5-0, 2-0 Big Ten) survived a raucous whiteout crowd of 110,889 — a Beaver Stadium record — Saturday at Penn State.

The No. 9 Nittany Lions (4-1, 1-1 Big Ten) threw their best punch and appeared to have pulled away with the top-10 battle, but OSU pulled out an improbable return thanks to triumphant performances across the roster.

In the wake of Ohio State’s prime-time victory in Happy Valley, what was there to take from an instant classic against Penn State?

On offense, at least, that title belongs to J.K. Dobbins. When the Buckeyes needed a boost, the sophomore running back did whatever was asked. The 5-10, 214-pounder accounted for 118 yards from scrimmage on 19 touches with two momentum-shifting touchdowns. OSU’s offense struggled mightily until Dobbins drew first blood in the second quarter — right before halftime — for Ohio State on a 26-yard catch and run for a score off a screen to put the Buckeyes on the board despite their 13-7 deficit. The second half called for more of the same in opportunistic times from his four-yard touchdown run at the 10:22 mark of the third quarter to his 35-yard reception off a screen to dig OSU out of poor field position with its back against the wall at its own 4. Dobbins got the drive going before Ohio State capped the trek downfield with the game-winning score.

In the six-man rotation of receivers, Binjimen Victor is often the forgotten Buckeye. The 6-4, 200-pounder was unforgettable in OSU’s comeback effort. He only had two receptions for 55 yards, but his second — a 47-yard catch and run — singlehandedly saved Ohio State. Victor muscled a jump ball for a first down and made magic happen, staying on his feet as he somehow outraced a swarm of PSU defenders for a score that kept the Buckeyes alive and trailing 26-21 with 6:42 left in the fourth quarter. With the weapons at wide receiver, Victor might not be the first name to come to mind due to his lack of big-game moments. That notion changed entirely in Happy Valley with the way he stepped up and delivered a play only his physical frame was capable of in the first place.

Questions about OSU’s lack of discipline were validated against the Nittany Lions. Between blowout victories Sept. 8 against Rutgers and Sept. 22 over Tulane, Ohio State averaged 10.5 fouls for 104.5 yards. And at PSU, the Buckeyes fell victim to those issues once more as 10 flags flew for 105 yards. Most of the time, they killed drives for Ohio State and gave Penn state second chances upon second chances. If not for an incredible come-from-behind effort in the final half of the fourth quarter, penalties would have been factoring into the equation as to why the Buckeyes dropped this game. Instead, they get chalked up once more as a slap on the wrist, although this time they almost cut deeper than they have.

Through four games, sophomore quarterback Dwayne Haskins lit the world on fire and emerged as an inevitable front-running candidate for the Heisman Trophy. The 6-3, 220-pound pocket passer had his numbers quelled against the Nittany Lions as they dialed up the pressure with four hurries and one sack. Haskins, however, stepped up when he needed to down the stretch as his offense was given a few final chances. In the end, Haskins was 22 for 39 (56.4 percent) with 270 yards and three touchdowns to one interception — a 45-yard return that resulted in a 39-yard field goal to put PSU ahead 6-0 at the 11:18 mark of the second quarter. Haskins took a step back, but also still stepped up when he needed to turn in a mistake-free performance down the stretch. Ultimately, his performance gave OSU a chance to win — which matters most.

Earlier in the week, Drue Chrisman stated how he believed Ohio State had the best punt-coverage team in college football. With field position playing as important of a role as it has in the past years of the head-to-head meetings against Penn State, particularly in 2016 and 2017, the sophomore punter’s words of importance came to fruition. While the Buckeyes were unable to move the ball, Chrisman punted nine times for 431 yards — a net average of 47.9 per boot — with three inside the 20 and a long of 58. Credit is due to gunners and others on the coverage unit, such as sophomore cornerback Jeffrey Okudah and fifth-year senior wide receiver Terry McLaurin, but Chrisman’s leg saved OSU in more ways than one until the team’s other two phases finally picked things up down the stretch.