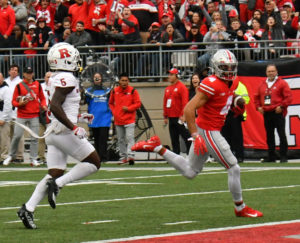 After an extended five-game homestead, Ohio State will finally hit the road for the first time this season. The first trip comes after a 49-10 win over the visiting Rutgers Scarlet Knights that featured everything from a record-breaking rushing performance to a near brawl in the fourth quarter, but regardless of how it shook out, the Buckeyes enter the sixth week of the season with a 5-0 record.

The Big Ten has provided little in the way of competition so far for Ohio State in the form of Wisconsin and Rutgers, so the Buckeyes will find out this week if that challenge will come in the form of Michigan State, where Ohio State will encounter the first hostile environment of the season.

Check back every Monday at BuckeyeSports.com for a brief preview of the Buckeyes’ upcoming opponent, with stories and features throughout the week.

Expectations were high for Michigan State coming off last season in which the Spartans finished 11-2, their best record since they finished 12-2 under Mark Dantonio in 2015 and made – to date – their only appearance in the College Football Playoff.

Head coach Mel Tucker was the man behind the turnaround, and also the recipient of a 10-year, $9.5 million contract extension from Michigan State near the end of last season. So far, the Spartans have been rewarded with a 2-3 record this season, with losses to Washington, Minnesota and Maryland over the last three weeks.

Michigan State’s defense continues to show the same issues that plagued it last season, while the offense has found little success after the departure of Kenneth Walker III to the NFL. The Spartans brought in a pair of transfer backs to help mitigate the loss of Walker in Jalen Berger and Jarek Broussard, but the duo has combined for just 4.9 yards per carry this season.

The passing offense is not faring much better, with quarterback Payton Thorne throwing for 1,121 yards but tossing just eight touchdowns to six interceptions.

“We haven’t been on the road yet so it’s a unique challenge for us. We haven’t had to deal with being on a plane for a couple of hours and how that fits your body and hydration. We’re going to have to rely on the veteran guys who have been there and done that before.”

SERIES HISTORY: This will be the 51st meeting between Ohio State and Michigan State. The Buckeyes hold a 35-15 lead in the series, with the largest margin of victory coming in last season’s 56-7 win in Columbus.

The Buckeyes have won the last six games against the Spartans and 15 of the last 18 dating back to 2000. Only one of those meetings came in the Big Ten Championship Game, which was won 34-32 by Michigan State on Dec. 7, 2013.